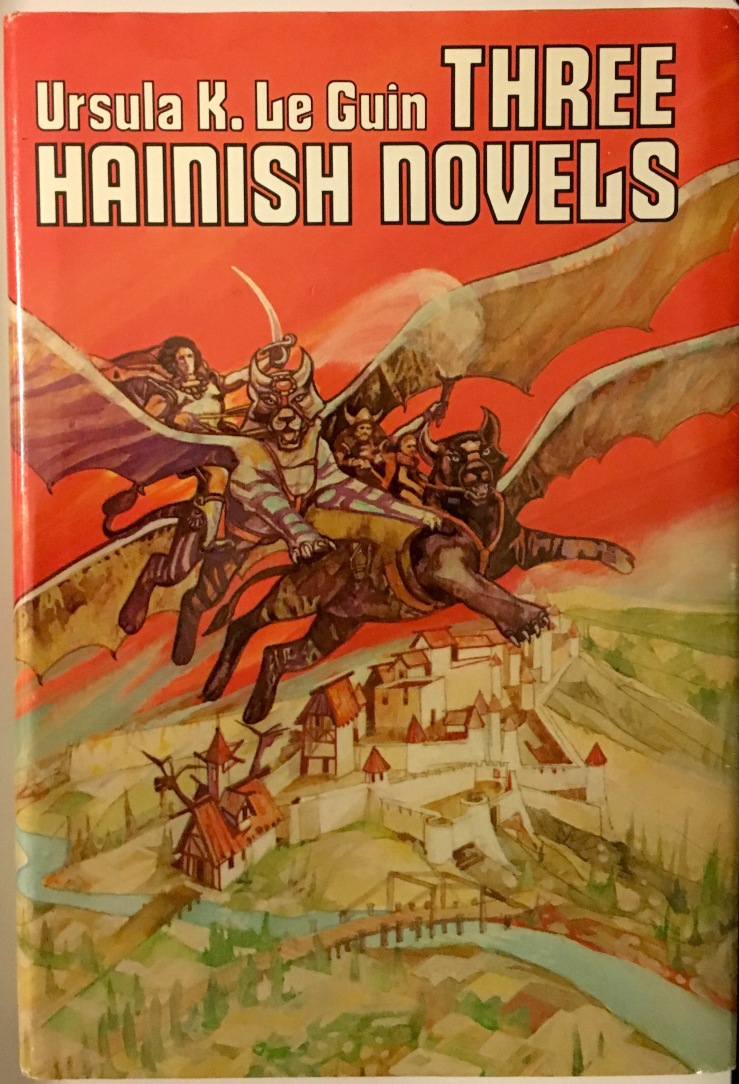 “A country, a people…Those are strange and very difficult ideas.”

—Each of the novels in Ursula K. Le Guin’s so-called Hainish cycle obliquely addresses Wells’s question by tackling those strange and very difficult ideas of “a country, a people.” The best of these Hainish books do so in a manner that synthesizes high-adventure sci-fi fantasy with dialectical philosophy.

—What am I calling here “the best”? Well—

The Left Hand of Darkness

—(How oh how oh how dare I rank The Dispossessed—clearly a masterpiece, nay?—so low on that little list? It’s too dialectical, maybe? Too light on the, uh, high adventure stuff, on the fantasy and romance and sci-fi. Its ideas are too finely wrought, well thought out, expertly cooked (in contrast to the wonderful rawness of Rocannon’s World, for example). None of this is to dis The Dispossessed—it’s probably the best of the Hainish books, and the first one casual readers should attend to. (It was also the first one I read way back when in high school)).

—The novels in Le Guin’s so-called Hainish cycle are

—Okay, so I decided to include For Ways to Forgiveness in the above list even though most people wouldn’t call it a “novel” — but its four stories (novellas, really) are interconnected and tell a discrete story of two interconnected planets that are part of the Hainish world. And I pulled a quote from it above. So.

—(I keep modifying “Hainish cycle” with “so-called” because the books aren’t really a cycle. Le Guin’s world-building isn’t analogous to Tolkien’s Middle Earth or Faulkner’s Yoknapatawpha County. (Except when her world-building is analogous). But let us return to order).

—Le Guin on the subject:

People write me nice letters asking what order they ought to read my science fiction books in — the ones that are called the Hainish or Ekumen cycle or saga or something. The thing is, they aren’t a cycle or a saga. They do not form a coherent history. There are some clear connections among them, yes, but also some extremely murky ones. And some great discontinuities (like, what happened to “mindspeech” after Left Hand of Darkness? Who knows? Ask God, and she may tell you she didn’t believe in it any more.)

OK, so, very roughly, then:

Rocannon’s World, Planet of Exile, City of Illusions: where they fit in the “Hainish cycle” is anybody’s guess, but I’d read them first because they were written first. In them there is a “League of Worlds,” but the Ekumen does not yet exist.

—I agree with the author. Read this trilogy first. Read it as one strange book.

—(Or—again—pressed for time and wanting only the essential, read The Dispossessed and The Left Hand of Darkness—but you already knew that, no?).

—Rocannon’s World, Le Guin’s début, is maybe her most overlooked novel. It’s overstuffed with ideas, concepts, riffs—a garden germinating in a frantic fun rush. From the get go, Le Guin spins fantasy tropes—the Tolkien shit, if you like—on their ear, spins them out into golden sci-fi stuff. New old yarn for a new tapestry. Or blueprint (?!). Rocannon’s World is the big Hainish blueprint (only it’s the kind of wonderful blueprint that is only a blueprint in retrospection; a blueprint that is in no way a plan at all).

A stranger comes to town. (Doesn’t he always?). And by town we mean planet. A stranger comes to town (planet) and bears witness to the town’s (planet’s) fantasies, myths, legends, cultures (the culture of the culture). Anthropology, of course. But our viewpoint character—Rocannon here—he makes us examine our own tropes anew: Elves, dwarves, angels. Heroes. Good, evil, etc. Are we not Men (and Women)? Are we not People? Are we not a People?

—With Planet of Exile, Le Guin initiates a refinement to Rocannon’s perfect rawness. We find restraint and a bit of balance, but lots and lots of fun. Reading Planet, I could not help but think that George R. R. Martin should be sending Ms. Le Guin barrels of that HBO loot, for in Planet of Exile we find

Seasons that last for years, decades even

Monstrous snow ghouls who might as well be called “White Walkers”

Fear that “Winter is coming.”

—City of Illusion is a marvelous discontinuous sequel to Planet; Le Guin tugs at threads from the previous work that we foolish readers might not have thought to tug at. City of Illusion feels like Le Guin’s first thorough philosophical exercise. (Please do not think I’m discounting the intelligence of the first two novels—I am not). This is a novel about memory and identity and place—and at its core, it makes its reader mull over truth and lie: about knowing, and how we know what we know. But it’s also a thriller, a page turner, a yarn. City of Illusion is an epistemological  fantasia, and it points toward Le Guin’s greatest achievement in her Hainish suite: smart novels that frame enormous philosophical debates within engaging, propulsive fantasy fiction. And as I write this now, I wonder if it isn’t my favorite of the lot.

[Dear reader, I hope you didn’t think I’d be summarizing these books!]

—But back to Le Guin again, offering the roughest schematic for the reading of her Hainish books (which are not a Hainish cycle, as she’s warned us):

Then you could read The Word for World is Forest, The Left Hand of Darkness, The Dispossessed, in any order. In Dispossessed, the ansible gets invented; but they’re using it in Left Hand, which was written fifteen years earlier. Please do not try to explain this to me. I will not understand.

[How not to fall in love with those last two sentences!?]

—The Word for World Is Forest is an angry angry novel. What is the cliché?—“Choked on anger”? The Word for World Is Forest is choked on anger, the fat glistening bitter anger of the wholly righteous. This allegorical novel is about the awful evil stupid nihilism of the Vietnam War. It is effective and sad as an anti-war tract, and admirable in its persistence in showing how war makes people less than people (Wells’s “Are we not Men?” echoes perhaps most strongly here—or at least most existentially, in that word’s political shade). And Word for World doesn’t fall into the trap-plot of Colonizer-sees-the-error-of-his-ways-and-leads-the-native-people-in-righteous-revolt-against-the-baddies that James Cameron’s forgettable blockbuster Avatar utilized. (Like the aforementioned Mr. Martin, James Cameron owes Le Guin some bucks—Avatar ripped off quite a bit of The Word for World Is Forest). Ultimately though, Word for World is too on-the-nose in its criticism of the Vietnam War—the book fails to transcend its time. It’s a screed. It might be skipped. But it’s short.

—The Left Hand of Darkness is amazing. Perfect in its strange imperfections and crammed with fables and myths and misunderstandings, it is the apotheosis of Le Guin’s synthesis of adventure with philosophy. Darkness is about shadows and weight. About pulling weight—literally, figuratively. It’s also the story of an ice planet. (A stranger comes to the ice planet!). It’s a political thriller. It’s a sexual thriller. But the impression that lingers strongest: The Left Hand of Darkness is one of the better literary evocations of friendship (its precarious awful strange wonderful tenuous strength) that I’ve ever read.

—The Dispossessed—well I loaded my thoughts on it upfront, nay?—The Dispossessed feels closer to Le Guin’s non-Hainish 1971 novel The Lathe of Heaven in some ways than it does to its so-called Hainish kin. Both novels formally (and spiritually) evoke yin and yang, opposition, conflict, stress, and, ultimately, synthesis. The Dispossessed is a riff on anarchy and stability, allegiance to one’s community and family weighed against personal vision and ecumenical dreams. Again, to reiterate—of this cohort of novels it is, along with The Left Hand of Darkness, essential.

—-Four Ways to Forgiveness shows Le Guin flexing some formal prowess. We have here four novellas in different forms—two distinct romances, a bildungsroman, and a journal—employed to tell a story of slavery and civil war (not unlike our own American history in some ways). The book also features an appendix that reads like a textbook—another genre, I suppose—a formal device that hearkens all the way back to Rocannon’s World.

—The Telling, as its title suggests, is about storytelling, about how we remember (and forget) through what we choose to tell and how we choose to tell it. In previous Hainish books, Le Guin critiqued colonialism, egoism, racism, sexism, slavery, and war. The Telling condenses those major themes into a sustained but measured attack on late capitalist corporatism. Published in 2000, The Telling somehow feels like a post-9/11 novel; cyberpunk touches, like unmanned drones in warfare for example, feel darkly prescient. The Telling succeeds most in its evocations of what empathy means and looks like and sounds like. This novel is about listening—about the difficulty of and the vital need to listen while suspending judgment.