This one is kind of a double-library theft

The librarian at the high school I teach at keeps a pile of books from the public library system that are mistakenly returned to our school library. I couldn’t help but notice Donald Goines’ Swamp Man on top, with it’s strange, somewhat homoerotic cover. I knew right away that I was going to take it. This book was due back to the Regency Square Library,  October 13th, 2000.

Written in 1974, Swamp Man taps into that whole 70s-creepy-shenanigans-rape-in-the-woods-Deliverance vibe. In the backwood swamps of Mississippi, George Jackson hunts down the evil racist crackers who have kidnapped and gangraped his sister Henrietta, killing them off one at a time, swamp man-style.

Goines, a former heroin addict, started writing in prison, cranking out 16 books in five years. He was shot to death in 1974. 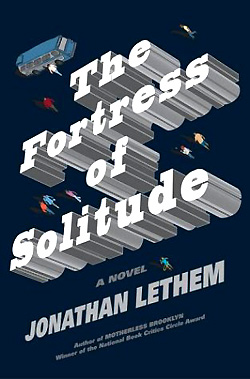 Jonathan Lethem’s The Fortress of Solitude deserved the rave reviews it got back in 2003 when it first came out. I think it was a review in The Believer (although I’m pretty sure it wasn’t in Nick Hornby’s sometimes-entertaining “Stuff I’ve Been Reading” column) that prompted me to order a used copy via Amazon. I loved this book so much that of course I offered it up to Ricotta Parks, who apparently doesn’t read anything longer than a soup label anymore. Never fear, RP, I procured a nice cheap copy at the local B&N yesterday afternoon.

“‘Everything naturally forms into a Beatles, people can’t help it.’

Nietzsche often gets used in popular culture as a kind of shorthand for dark mysterious anger and brooding solipsistic intellect. I take this to be a serious misunderstanding of this fundamentally life-affirming philosophy. Nietzsche’s work was infamously first misappropriated by the Nazis (with the guidance of N’s conniving sister). The Nazi’s misreading of N’s concept of the superman helped gird a genocidal machine with the false semblance of ‘philosophical’ armor.

This weekend the wife and I saw and thoroughly enjoyed Little Miss Sunshine (this is not to be confused with the Roger Hargreaves epic from the Mr. Men and Little Miss series)

This movie depicts the bizarre odyssey of the dysfunctional Hoovers as they try to get little Olive Hoover (charmingly acted by Abigail Breslin) to the “Little Miss Sunshine” pageant all the way in California.

Olive’s angry, intense teenage brother Dwayne has not spoken for over 9 months. He communicates only through sullen glares and written notes (sample — “I hate everyone!”)

Dwayne is inseparable from his battered copy of Thus Spoke Zarathustra. He also has a huge banner with an imagistic drawing of Nietzsche (with a powerful mustache) hanging on his wall. A strange moment occurs when suicidal Uncle Frank (Steve Carell) looks at the banner and nonchalantly avers: “Nietzsche, huh?” Frank later claims to be America’s pre-eminent Proust scholar.

I liked the movie a lot, and of course I love literary references. But Nietzsche is my favorite philosopher and I hate to see him misrepresented as a humbug or a misanthrope or a miscreant of any sort. Nietzsche wanted people to think for themselves and avoid the static slavery of indoctrination (“the herd”). In this sense, N’s ideas do inform Little Miss Sunshine‘s heroes, the bizarre, nonconformist Hoovers. But N’s work also warns against easy symbols and singular readings, while stressing the importance of embracing life. Nietzsche’s writing is not the mute echo of anger and resentment and hate; Nietzsche’s wiritng is the booming voice of joy and movement and life. And maybe sunshine.

I took this from the book swap at my NOVA school in Shinjuku. I swapped in a video tape of a Nick at Nite Cosby Show marathon. This was immediately disappeared to great controversy.

I later found out Kinski Uncut actually belonged to one of the Japanese students at Shinjuku-nishiguchi, who had given it to a teacher there. I didn’t know who Klaus Kinski was but I loved the pink cover. Also, at the time I consumed just about anything written in English. Since then I’ve seen him in a number of films, including his famous turn as the titular character in Werner Herzog’s Aguirre, Wrath of God.

Kinski Uncut (the punning title recalls the South Park movie) is actually a really cool, twisted autobio about a true weirdo. Kinski describes the destruction of his family, his POW internment in post-WWII Germany, acting out Goethe on tavern tables, trying to kill Werner Herzog, not getting the respect he deserves…and fucking lots and lots of different women. Kinski doesn’t seem to be able to not have sex with women, and if his claims in this book are true, he puts Wilt Chamberlain to shame.

I suspect that Ricotta Park, a notorious biblioklept, may be in current possession of this book.

What a great book. I procured this from one of those free boxes they sometimes have at the library…curiously it’s not a library edition.

1. Pissing in the Snow

One time there was two farmers that lived out on the road to Carico. They was always good friends, and Bill’s oldest boy had been a-sparking one of Sam’s daughters. Everything was going fine till the morning they met down by the creek, and Sam was pretty goddam mad. “Bill,” says he, “from now on I don’t want that boy of yours to set foot on my place.” “Why, what’s he done?” asked the boy’s daddy.“He pissed in the snow, that’s what he done, right in front of my house!”But surely, there ain’t no great harm in that,” Bill says.“No harm!” hollered Sam. “Hell’s fire, he pissed so it spelled Lucy’s name, right there in the snow!”“The boy shouldn’t have done that,” says Bill. “But I don’t see nothing so terrible bad about it.”“Well, by God, I do!” yelled Sam. “There was two sets of tracks! And besides, don’t you think I know my own daughter’s handwriting?”