In Ch. VII of Part I of William Gaddis’s 1955 novel The Recognitions, the erstwhile hero of the novel, Wyatt Gwyon—who has by this point disappeared into an anonymous he—meets Basil Valentine, a somewhat ambiguous and priestly art-world contact for Recktall Brown, the arch-capitalist Mephistophelean villain of the novel. Brown uses Valentine to arrange the forgeries that Gwyon executes. Here, Valentine and Wyatt discuss Brown, who has left the room. (Brown is the initial He; Valentine speaks first):

—He would absolutely have to have Alexander Pope in a box, to enjoy him. He is beyond anything I’ve ever come upon. Honestly, I never in my life could have imagined that business could live so powerfully independent of every other faculty of the human intelligence. Basil Valentine rested his head back, blowing smoke toward the ceiling, and watching it rise there. —Earlier, you know, he mentioned to me the idea of a novel factory, a sort of assembly line of writers, each one with his own especial little job. Mass production, he said, and tailored to the public taste. But not so absurd, Basil Valentine said sitting forward suddenly.

—When I laughed . . . but it’s not so funny in his hands, you know. Just recently he started this business of submitting novels to a public opinion board, a cross-section of readers who give their opinions, and the author makes changes accordingly. Best sellers, of course.

—Yes, good God, imagine if … submitting paintings to them, to a cross section? You’d better take out . . . This color . . . These lines, and . . . He drew his hand down over his face, —You can change a line without even touching it. No, he went on after a pause, and Valentine watched him closely, —nothing is funny in his hands. Everything becomes very . . . real. 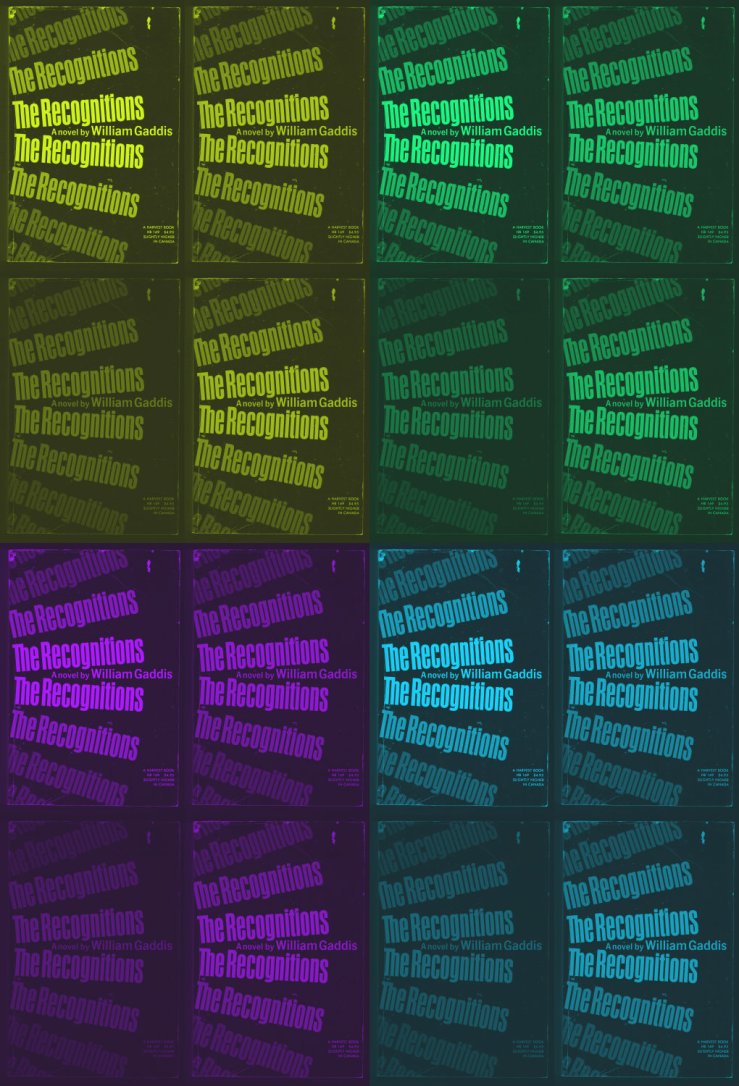 I continue to enjoy re-reading Gaddis’s debut novel, aided in large part by an audiobook version read by Nick Sullivan. I’ve also been reading The Recognitions with/against Letters of William Gaddis (ed. Steven Moore, Dalkey Archive, 2013), which I do not recommend doing (especially for first-time readers). Gaddis, paraphrasing his own novel, said that the artist was simply “the dregs of his [own] work,” and much of The Recognitions reads like Gaddis polishing the material from his own early life and travels and readings, and then forcing that material—the nuggets and the morsels (and, let us be honest, the occasional duds)—into an angry demanding sustained attack on the Modern condition. But the material is good ammunition in that oh-so self-conscious attack on Modernism—an attack that in many ways engenders postmodernism, or at least builds a bridge to it, or perhaps sunders links to Modernism—

—look, I have way too many stupid metaphors cooking here, forgive me: What I mean to say, in simpler terms, is that The Recognitions diagnoses the end of big-em Modernism, that it describes something yet-to-emerge, and that it also, significantly, performs that something yet-to-emerge. Gaddis’s letters show the frustrations of a young man trying to cook up adventures in a modern world: a world already explored, mapped, tagged, and written about by other folks. And not just written about im histories and novels, but also in cheap guide books and cheap glossy magazines. This is the world after the age of mechanical reproduction, the world in which Gaddis’s hero Wyatt strives to forge a legitimate forgery of a place for himself.

Gaddis’s novel’s emergent postmodernism—more fully realized in his follow-up, J R—also presciently points to the post-postmodernist storytelling world of late capitalism. Gaddis’s villain Recktall Brown is a brute, but this philistine is perceptive, and he understands the economy of middlebrow aesthetics. As erudite Valentine laments, “I never in my life could have imagined that business could live so powerfully independent of every other faculty of the human intelligence.” Valentine should imagine harder. But this is America, where people frequently mistake wealth and the power to create wealth with creative intelligence.

Maybe I’m too hard here on Valentine, who eventually realizes that an appeal to the lowest common denominator is “not so absurd,” after he reflects on Recktall’s business idea “of a novel factory, a sort of assembly line of writers, each one with his own especial little job. Mass production…tailored to the public taste.” And we then learn that Recktall has already capitalized on his vision of masscult writing: “Just recently he started this business of submitting novels to a public opinion board, a cross-section of readers who give their opinions, and the author makes changes accordingly. Best sellers, of course.”

Reading this, I mentally annotated: Ah, Netflix-—that’s the novel factory of 2018. And not just Netflix—I mean, clearly, not just Netflix, that’s simply a signal example—but rather the idea of the data-driven artefact, the non-artefact, the copy of a copy of a copy, the narrative entirely derived from atomizing the masscult nostalgia artefacts of 20, 30, 40 years ago, retrofitting them, repackaging them, and selling them as the real thing. Wyatt’s final observation in the passage laments that Recktall Brown, and the emerging late capitalism he represents, is winning a kind of war on culture and imagination. And nothing is funny in this devil’s busy hands: “Everything becomes very . . . real.” Even the fakes. Even the copies. Especially the copies.