In Ch. VII of Part I of William Gaddis’s 1955 novel The Recognitions, the erstwhile hero of the novel, Wyatt Gwyon—who has by this point disappeared into an anonymous he—meets Basil Valentine, a somewhat ambiguous and priestly art-world contact for Recktall Brown, the arch-capitalist Mephistophelean villain of the novel. Brown uses Valentine to arrange the forgeries that Gwyon executes. Here, Valentine and Wyatt discuss Brown, who has left the room. (Brown is the initial He; Valentine speaks first):

—He would absolutely have to have Alexander Pope in a box, to enjoy him. He is beyond anything I’ve ever come upon. Honestly, I never in my life could have imagined that business could live so powerfully independent of every other faculty of the human intelligence. Basil Valentine rested his head back, blowing smoke toward the ceiling, and watching it rise there. —Earlier, you know, he mentioned to me the idea of a novel factory, a sort of assembly line of writers, each one with his own especial little job. Mass production, he said, and tailored to the public taste. But not so absurd, Basil Valentine said sitting forward suddenly.

—When I laughed . . . but it’s not so funny in his hands, you know. Just recently he started this business of submitting novels to a public opinion board, a cross-section of readers who give their opinions, and the author makes changes accordingly. Best sellers, of course.

—Yes, good God, imagine if … submitting paintings to them, to a cross section? You’d better take out . . . This color . . . These lines, and . . . He drew his hand down over his face, —You can change a line without even touching it. No, he went on after a pause, and Valentine watched him closely, —nothing is funny in his hands. Everything becomes very . . . real.

I continue to enjoy re-reading Gaddis’s debut novel, aided in large part by an audiobook version read by Nick Sullivan. I’ve also been reading The Recognitions with/against Letters of William Gaddis (ed. Steven Moore, Dalkey Archive, 2013), which I do not recommend doing (especially for first-time readers). Gaddis, paraphrasing his own novel, said that the artist was simply “the dregs of his [own] work,” and much of The Recognitions reads like Gaddis polishing the material from his own early life and travels and readings, and then forcing that material—the nuggets and the morsels (and, let us be honest, the occasional duds)—into an angry demanding sustained attack on the Modern condition. But the material is good ammunition in that oh-so self-conscious attack on Modernism—an attack that in many ways engenders postmodernism, or at least builds a bridge to it, or perhaps sunders links to Modernism—

—look, I have way too many stupid metaphors cooking here, forgive me: What I mean to say, in simpler terms, is that The Recognitions diagnoses the end of big-em Modernism, that it describes something yet-to-emerge, and that it also, significantly, performs that something yet-to-emerge. Gaddis’s letters show the frustrations of a young man trying to cook up adventures in a modern world: a world already explored, mapped, tagged, and written about by other folks. And not just written about im histories and novels, but also in cheap guide books and cheap glossy magazines. This is the world after the age of mechanical reproduction, the world in which Gaddis’s hero Wyatt strives to forge a legitimate forgery of a place for himself.

Gaddis’s novel’s emergent postmodernism—more fully realized in his follow-up, J R—also presciently points to the post-postmodernist storytelling world of late capitalism. Gaddis’s villain Recktall Brown is a brute, but this philistine is perceptive, and he understands the economy of middlebrow aesthetics. As erudite Valentine laments, “I never in my life could have imagined that business could live so powerfully independent of every other faculty of the human intelligence.” Valentine should imagine harder. But this is America, where people frequently mistake wealth and the power to create wealth with creative intelligence.

Maybe I’m too hard here on Valentine, who eventually realizes that an appeal to the lowest common denominator is “not so absurd,” after he reflects on Recktall’s business idea “of a novel factory, a sort of assembly line of writers, each one with his own especial little job. Mass production…tailored to the public taste.” And we then learn that Recktall has already capitalized on his vision of masscult writing: “Just recently he started this business of submitting novels to a public opinion board, a cross-section of readers who give their opinions, and the author makes changes accordingly. Best sellers, of course.”

Reading this, I mentally annotated: Ah, Netflix-—that’s the novel factory of 2018. And not just Netflix—I mean, clearly, not just Netflix, that’s simply a signal example—but rather the idea of the data-driven artefact, the non-artefact, the copy of a copy of a copy, the narrative entirely derived from atomizing the masscult nostalgia artefacts of 20, 30, 40 years ago, retrofitting them, repackaging them, and selling them as the real thing. Wyatt’s final observation in the passage laments that Recktall Brown, and the emerging late capitalism he represents, is winning a kind of war on culture and imagination. And nothing is funny in this devil’s busy hands: “Everything becomes very . . . real.” Even the fakes. Even the copies. Especially the copies. 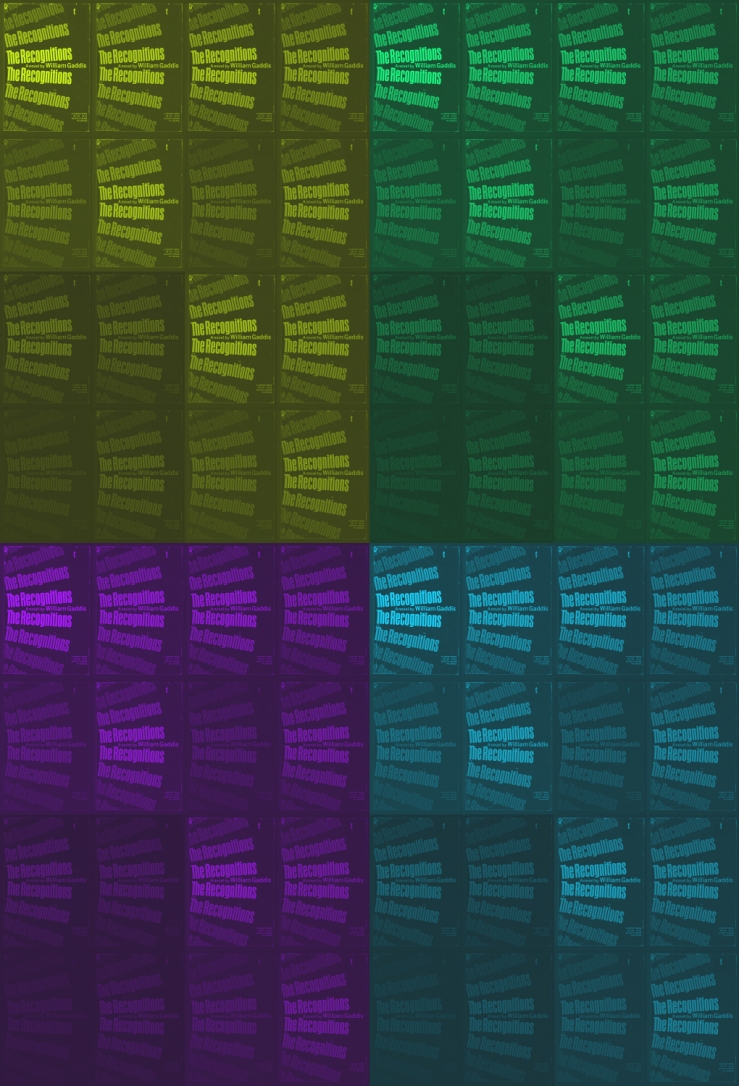 “The NY Times posted an article about an author who was outed as a fraud for writing a memoir about her life as a half-Native American, half-white gangbanger from South Central Los Angeles who escaped to the University of Oregon when she was really just an activist who at one point worked with gangs and created the characters in her memoir based on real people she had met in her real/fake life.The Times actually reviewed the book just last week and praised it.

I’ve just been pissed ever since that James Frey controversy about the idea that a supposed memoir has to be true. Does the fact that she made up portions of this book make her accomplishment any less significant? Isn’t a moving work of fiction a greater accomplishment than a moving autobiography? Are people really so concerned with whether someone actually did something that they are willing to ignore a touching, well-written narrative?

That James Frey novel, what I’ve read of it, was a tad overcooked, but about 10 people told me I had to read it because it was sooooo good. After Oprah (who made a gazillion dollars promoting his work) sold him down the river, he became a literary pariah.

Is the phrase “based on a true story” important in the appreciation of a story at all?”

I wrote a blog a few weeks ago about a few run-ins I had at an AP workshop, specifically related to teaching the canon. Anyway, that aside, during that workshop, this question came up. The mediator/instructor had the room show, by hands, their opinion on the issue. It was roughly a 70-30 split, with the majority favoring “authenticity” in their memoirs. I was, of course, in the minority.

Like Dave, I was steamed over the James Frey thing, not because I cared about the book–it looked like trash, frankly–but because he became a strange acid test for what America now thinks it needs from a memoir.

If we start from the assumption that genres impose a functional structure that inheres within the reading of a book, we’ve already made a strange, silly, and ultimately illusory set of distinctions to guide our reading. All one has to do is look at the travel literature of the sixteenth century or a science text book from the 1920s to see how quickly “validity” melts under context.

But even if we grant that genre has a meaningful or necessary purpose, and we work from this assumption, I think it’s a huge mistake to believe that “memoir” is the same as “nonfiction.” There are several simple reasons for this.

For one, to tell an effective and affecting story requires a manipulation of events–editing, hyperbole, recoloring, touch-ups, and so on. Events in life don’t necessarily unfold in a “readable” way. And I think that many, if not most readers go into a memoir understanding that the tale they read may be compressed or somehow aestheticized.

But I think a more fundamental reason that memoir shouldn’t be held to the strictest ideals of verity follows from the simple fact that memory is in no way perfect, absolute, or unchanging. We cannot perfectly record our memories, nor do they stay stable to us. Memories are always volatile, swirling; we forge our identity in every moment by reinterpreting and reimagining our past.

Any memoirist must literally reimagine their memories in order to write, and if they choose not to reimagine, but to instead imagine (invent and create) memories, what does it say about our expectations and needs as readers to judge their writing based solely on adherence to structural genre?

In the preface to Dave Eggers’s What is the What, Valentino Achak Deng foregrounds these problems. He says that the book–his “autobiography,” written by Dave Eggers (and hence not his autobiography)–must be considered a novel, as he was very, very young when many of the events recorded in the book happened. Similarly, Eggers’s own memoir, A Heartbreaking Work of Staggering Genius, repeatedly references its own flights of fiction, acknowledges its own need to invent a new imagined version of memories that never happened in order to better explain what really did happen. The Autobiography of Malcolm X was written by Alex Haley; The Interesting Narrative of Olaudah Equiano is rife with distortions, inaccuracies and completely fabricated events; in crafting A Portrait of the Artist as a Young Man–which may or may not be a memoir (although it is certainly a book…)–James Joyce wholly lifted entire passages of contemporary religious tracts.

James Weldon Johnson’s novel, The Autobiography of an Ex-Colored Man, illustrates how easily notions of genre–just like notions of race and stable identity–can be deconstructed. Johnson anonymously published the “autobiography” in 1912, and it was received as the true life story of an extraordinary “Negro” who shockingly was able to “pass” as a white man, to the extent that he (gasp!) married a white woman and became a major property owner. The book initiated a minor racial panic, causing some critics to insist that it must be fake because no black man could effectively “pass” as the unnamed narrator claimed to do. JWJ’s deconstruction of race and identity could not have worked in the same way had he presented it within the limits of a “true” memoir. It took fiction (masquerading as fact) to reveal a more profound reality.

A good writer makes stuff up and writes it down in a way that makes us want to read it and not put it down and keep reading it until we’ve read it all and want to read it again. If finding out the circumstances of the writing of the book do not match a set of expectations we had going into reading the book, we need to re-evaluate those expectations.