THE great problem is at length solved! The air, as well as the earth and the ocean, has been subdued by science, and will become a common and convenient highway for mankind. The Atlantic has been actually crossed in a Balloon! and this too without difficulty—without any great apparent danger—with thorough control of the machine—and in the inconceivably brief period of seventy-five hours from shore to shore! By the energy of an agent at Charleston, S.C., we are enabled to be the first to furnish the public with a detailed account of this most extraordinary voyage, which was performed between Saturday, the 6th instant, at 11, A.M., and 2, P.M., on Tuesday, the 9th instant, by Sir Everard Bringhurst; Mr. Osborne, a nephew of Lord Bentinck’s; Mr. Monck Mason and Mr. Robert Holland, the well-known æronauts; Mr. Harrison Ainsworth, author of “Jack Sheppard,” &c.; and Mr. Henson, the projector of the late unsuccessful flying machine—with two seamen from Woolwich—in all, eight persons. The particulars furnished below may be relied on as authentic and accurate in every respect, as, with a slight exception, they are copied verbatim from the joint diaries of Mr. Monck Mason and Mr. Harrison Ainsworth, to whose politeness our agent is also indebted for much verbal information respecting the balloon itself, its construction, and other matters of interest. The only alteration in the MS. received, has been made for the purpose of throwing the hurried account of our agent, Mr. Forsyth, into a connected and intelligible form. END_OF_DOCUMENT_TOKEN_TO_BE_REPLACED

Two weary porters at the King’s Cross terminus of the Great Northern Railway were thinking about going home, when a breathless, simple-looking countryman rushed up to them with anxious enquiries for a certain train. It had gone. He was crushed. “Whatever was he to do? He had been sent up from Cambridge with a big hamper of those sausages for which the University town is celebrated—a very special order. Was there no other train?” “No.” The poor fellow seemed overwhelmed. “As it is too late to find another market,” he complained, “the whole lot will be lost.” Then a happy thought seemed to strike him as more of the railway men gathered round, and he inquired ingratiatingly, “Would you care to buy the sausages; if you would, you could have them for fourpence a pound? If I keep them, they will probably go bad before I can dispose of them.” The idea took—“Real Cambridge Sausages” at fourpence a pound was not to be sneezed at. The dainties, neatly packed in pounds, went like the proverbial hot cakes. Shouldering the empty basket, and bidding his customers a kindly goodnight, the yokel set off to find a humble lodging for the night. Grateful smiles greeted the purchasers when they got home. Frying pans were got out and the sausages were popped in, and never was such a sizzling heard in the railway houses—or rather never should such a sizzling have been heard. But somehow they didn’t sizzle. “They are uncommon dry; seem to have no fat in ’em,” said the puzzled cook. They were dry, very dry, for closer investigation showed that the “prime Cambridge” were nothing but skins stuffed with dry bread! The railway staff of King’s Cross were long anxious to meet that simple countryman from Cambridge. 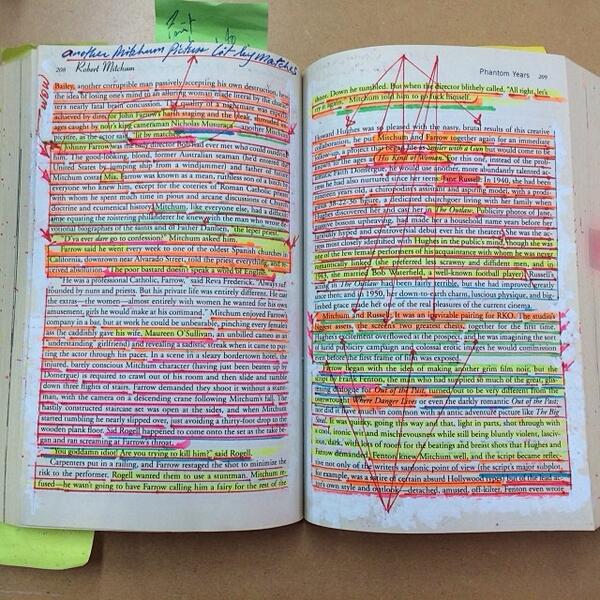 I first saw this at the tumblr Book Patrol; they corrected their post fairly quickly.

The book, Lee Server’s Baby I Don’t Care, a biography of Robert Mitchum, and its annotations, belong to Tony Shafrazi—

The novelist James Boice seems to be the origin of the link between the Mitchum biography to DFW/JJ (clearly a jest):

And then somehow the pic got to tumblr.

The University of Texas Libraries does not include Ulysses among its collection of Wallace’s personal books.

Oh, and, here’s a bigger pic of the passage from Server’s book: 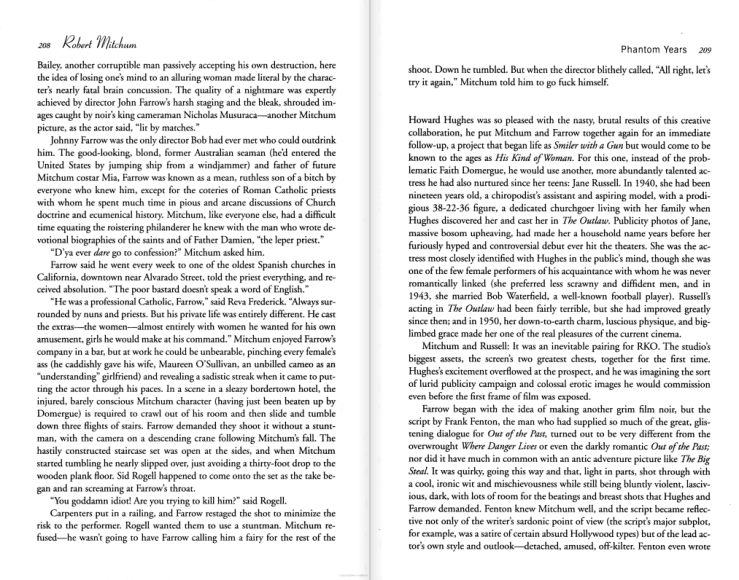 Thurman contacted Debenedetti, who denied that he faked the interviews. From the article:

Debenedetti said he was completely “shocked and saddened” that all these writers would have denied the veracity of his reporting. When I asked him about the interviews with Roth and Grisham, he flatly denied having invented them, and told me that Roth and Grisham were lying for “political” reasons—because their views on Obama would make them unpopular with left-leaning intellectuals. Roth, he added, might have decided that it was impolitic to express hostility toward Obama because it might spoil his chances for the Nobel.

I then read the list of other writers who had denied or questioned his conversations with them. In every case, Debenedetti asserted that he had invented nothing. When I asked if he could produce any recordings or notes from his interviews, he laughed and, admitting that it sounded like a “tired” excuse, told me that he had lost the tapes in some cases, and in others had “thrown them away.”

“The NY Times posted an article about an author who was outed as a fraud for writing a memoir about her life as a half-Native American, half-white gangbanger from South Central Los Angeles who escaped to the University of Oregon when she was really just an activist who at one point worked with gangs and created the characters in her memoir based on real people she had met in her real/fake life.The Times actually reviewed the book just last week and praised it.

I’ve just been pissed ever since that James Frey controversy about the idea that a supposed memoir has to be true. Does the fact that she made up portions of this book make her accomplishment any less significant? Isn’t a moving work of fiction a greater accomplishment than a moving autobiography? Are people really so concerned with whether someone actually did something that they are willing to ignore a touching, well-written narrative?

That James Frey novel, what I’ve read of it, was a tad overcooked, but about 10 people told me I had to read it because it was sooooo good. After Oprah (who made a gazillion dollars promoting his work) sold him down the river, he became a literary pariah.

Is the phrase “based on a true story” important in the appreciation of a story at all?”

I wrote a blog a few weeks ago about a few run-ins I had at an AP workshop, specifically related to teaching the canon. Anyway, that aside, during that workshop, this question came up. The mediator/instructor had the room show, by hands, their opinion on the issue. It was roughly a 70-30 split, with the majority favoring “authenticity” in their memoirs. I was, of course, in the minority.

Like Dave, I was steamed over the James Frey thing, not because I cared about the book–it looked like trash, frankly–but because he became a strange acid test for what America now thinks it needs from a memoir.

If we start from the assumption that genres impose a functional structure that inheres within the reading of a book, we’ve already made a strange, silly, and ultimately illusory set of distinctions to guide our reading. All one has to do is look at the travel literature of the sixteenth century or a science text book from the 1920s to see how quickly “validity” melts under context.

But even if we grant that genre has a meaningful or necessary purpose, and we work from this assumption, I think it’s a huge mistake to believe that “memoir” is the same as “nonfiction.” There are several simple reasons for this.

For one, to tell an effective and affecting story requires a manipulation of events–editing, hyperbole, recoloring, touch-ups, and so on. Events in life don’t necessarily unfold in a “readable” way. And I think that many, if not most readers go into a memoir understanding that the tale they read may be compressed or somehow aestheticized.

But I think a more fundamental reason that memoir shouldn’t be held to the strictest ideals of verity follows from the simple fact that memory is in no way perfect, absolute, or unchanging. We cannot perfectly record our memories, nor do they stay stable to us. Memories are always volatile, swirling; we forge our identity in every moment by reinterpreting and reimagining our past.

Any memoirist must literally reimagine their memories in order to write, and if they choose not to reimagine, but to instead imagine (invent and create) memories, what does it say about our expectations and needs as readers to judge their writing based solely on adherence to structural genre?

In the preface to Dave Eggers’s What is the What, Valentino Achak Deng foregrounds these problems. He says that the book–his “autobiography,” written by Dave Eggers (and hence not his autobiography)–must be considered a novel, as he was very, very young when many of the events recorded in the book happened. Similarly, Eggers’s own memoir, A Heartbreaking Work of Staggering Genius, repeatedly references its own flights of fiction, acknowledges its own need to invent a new imagined version of memories that never happened in order to better explain what really did happen. The Autobiography of Malcolm X was written by Alex Haley; The Interesting Narrative of Olaudah Equiano is rife with distortions, inaccuracies and completely fabricated events; in crafting A Portrait of the Artist as a Young Man–which may or may not be a memoir (although it is certainly a book…)–James Joyce wholly lifted entire passages of contemporary religious tracts.

James Weldon Johnson’s novel, The Autobiography of an Ex-Colored Man, illustrates how easily notions of genre–just like notions of race and stable identity–can be deconstructed. Johnson anonymously published the “autobiography” in 1912, and it was received as the true life story of an extraordinary “Negro” who shockingly was able to “pass” as a white man, to the extent that he (gasp!) married a white woman and became a major property owner. The book initiated a minor racial panic, causing some critics to insist that it must be fake because no black man could effectively “pass” as the unnamed narrator claimed to do. JWJ’s deconstruction of race and identity could not have worked in the same way had he presented it within the limits of a “true” memoir. It took fiction (masquerading as fact) to reveal a more profound reality.

A good writer makes stuff up and writes it down in a way that makes us want to read it and not put it down and keep reading it until we’ve read it all and want to read it again. If finding out the circumstances of the writing of the book do not match a set of expectations we had going into reading the book, we need to re-evaluate those expectations.