I like fairy tales, stories with happy endings. As the mother of two little ones, I also like stories about children. Which may be why  I liked Haley Tanner’s Vaclav & Lena as much as I did. I was actually surprised at just how much I liked it. Vaclav & Lena is a modern-day fairy tale, with all the right amounts of good and bad, kindness and evil. And there’s even a little magic, too.

Tanner’s writing is simple, witty and charming, not unlike the main character, Vaclav.  Her characters are real and believable, even as they are simultaneously too good to be true: Vaclav, completely earnest and selfless; Lena, a mystery to everyone, even herself; and Rasia, the adoring and dutiful guardian.

My love and concern for the welfare of the characters, coupled with a heartbreaking story line, made it hard to put this one down each night.  I fell in love with little, shy, neglected Lena and vulnerable, gallant, naïve Vaclav when they were just little kids, and my love only grew stronger when they matured into delicate, hormonal, irrational teenagers. And, as it was for Vaclav, Lena, and Rasia, it will be difficult for me too to forget this inseparable pair.

In keeping with Vaclav’s love of lists, I feel that it is only fitting to include some lists of my own:

List of What Vaclav Would Say this Book is About

The Importance of Lists

List of What Lena Would Say this Book is About

List of What Rasia Would Say this Book is About

Raising a Russian boy in America

Vaclav & Lena is new in trade paperback from Random House.

Haley Tanner’s acclaimed novel Vaclav & Lena is new in trade paperback (excellent cover on this one, by the bye). From Page Pulp’s review:

You could try to categorize this book as a love story or an immigrant story, but it is really simply a human story.  Like life itself, it can be sometimes funny, sometimes awkward (like the scene where Vaclav’s father walks in on him getting out the tub and makes a wrong assumption about what Vaclav was doing), sometimes happy, sometimes sad, and yes, sometimes incredibly dark.  It reflects the human experience so well, but never feels cliché.  Tanner’s prose has a simplicity that mimics the characters’ imperfect English.  She creates beauty with her words, but is never too flowery. This allows the story to shine through, unobscured. Her characters almost do not seem like characters; after awhile they start to feel wondrously real, like you could reach out and touch Lena’s messy black curls.  Tanner is adept at shaping both the story and the characters so that they feel realistic.

The stack overfloweth with new books—here are some of the more interesting ones: 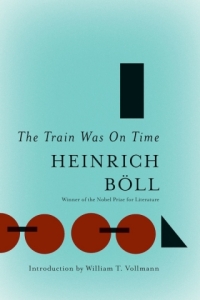 Melville House continues reissuing Heinrich Böll’s books with the short novel The Train Was on Time (with a killer afterward by William Vollmann) and Irish Journal, an account of Böll’s travels in Ireland in the early 1950s. Compact, tense, and immediate, The Train Was on Time relates the journey of a young German infantryman traveling on a troop train to the Eastern Front. He realizes that the war is already lost, and that his trip is essentially the first step in a death sentence. Irish Journal is hardly so severe, yet it still bears the scars of WWII trauma. Like all the titles in The Essential Heinrich Böll, these books feature beautiful, elegant design.

Whimsical love stories are tough to pull off. But as in the film Eternal Sunshine of the Spotless Mind, vibrant characters, believable romance and dark undertones make for a moving tale. The book’s contrast between childhood fantasy and the grim world outside tamps down the cutesiness. It helps that Ms. Tanner is such a strong storyteller, and her distinctive voice — winsome without being dopey — engulfs you immediately.

New in trade paperback from Picador: A Great Unrecorded History, Wendy Moffat’s biography of E.M. Forster, examines the life of the great British writer through the lens of his homosexuality. Forster published five classic novels between 1905 and 1924, and even though he wrote biographies and essays until his death in 1970, he never released another novel in his lifetime. Maurice was published in 1971. The novel, which Forster composed over decades, relates a homosexual love affair; Forster was determined that, contrary to convention, the love story should not be a tragedy and should indeed have a happy ending. Part of Moffat’s project seems to be to make a case for Forster as a progenitor of queer writing. From her prologue—

Though he burned great bonfires of ephemera, Morgan [Forster’s middle name] carefully preserved the record of his gay life. Thousands of unpublished pages of letters, diaries, essays, and photographs tell the story of the life he hid from public view. Some of the pages are scattered in archives. Some have been coaxed out into the world from remarkable hiding places — a vast oak cupboard in a London sitting room, a shoebox humbly nestled among mouse turds in a New England barn. Many of Morgan’s surviving friends have told their stories for the first time. Only in 2008 were the final entries in his private diary, restricted from view since his death, opened to readers. All his long life Morgan lived in a world imprisoned by prejudice against homosexuals. He was sixteen when Oscar Wilde was sent to prison, and he died the year after the Stonewall riots.

Almost a century ago, Forster dedicated Maurice to “a happier year.” Perhaps that time is now.

Bob Mould began playing his strange brand of frenzied, fuzzy punk rock in Hüsker Dü less than a decade after Forster’s death, and while it would be ridiculous to suggest that his life as a gay man (and teen) was easy, his new autobiography See a Little Light reveals that it is possible to work through pain, confusion, and negative public attitudes to a positive place. Mould’s homosexuality was an open secret, but he still felt protective of his personal life. However, a 1994 Spin magazine article by Dennis Cooper (yes, that Dennis Cooper) outed Mould. I’ll let him tell this part of the story—

For years I had lived in a fearful yet protective state. My parents were in a small town where people didn’t accept or understand homosexuality. I didn’t want to cause any undue stress in their lives by coming out. I remembered what happened to my high school acquaintance who ended up slaughtered in the woods. My coming out might create a hardship on my brother’s kids too—Syracuse, New York, where he now lived, was not a progressive bastion.

I had looped all the different possible fallouts and fears in my mind, a big one being that for fifteen years I had gender-neutralized my work so that it would be all-inclusive; as a result, my music was highly personal, and yet it affected a lot of people, whether they were gay or straight. But my fear was that 90 percent of my audience would have the meaning of my songs ripped out from underneath them. A song that straight people related to, now they find out it’s about two guys? The flip side, or what I now know to be the upside, was that I had a large audience who might not have known about my homosexuality, were very attached to the work, and could now see that love and loss and hope are universal emotions that can’t be owned, controlled, or denied by law or religion.

See a Little Light is not just a document of Mould’s struggles with homosexual identity, but that element is obviously indivisible from the rest of his life, which he writes about in deeply personal detail (with the aid of Michael Azerrad, who documented Hüsker Dü in a chapter of his book Our Band Could Be Your Life). There’s also plenty here on the Minneapolis-St. Paul scene, the early post-hardcore indie scene, analyses of Hüsker Dü songs, a history of Mould’s second band Sugar, thoughts on guitars, and touring, touring, touring. I’m hardly an unbiased reader here—Hüsker Dü and Sugar songs soundtracked a hefty chunk of my teen years and early twenties—but See a Little Light offers an emotional depth and level of insight absent from most musical biographies. See a Little Light is new in hardback from Little, Brown.