Two books in the mail today from Counterpoint Press, an expanding indie press with a broad but sharp catalog (including Soft Skull Press). The first is Irrepressible: The Life and Times of Jessica Mitford, a biography of the progressive upstart. From the press release—

Admirers and detractors use the same words to describe Jessica Mitford: subversive, mischief-maker, muckraker. J.K. Rowling calls Mitford her “most influential writer.” Those who knew her best simply called her “Decca.” Born into one of Britain’s most famous aristocratic families, Mitford eloped with Winston Churchill’s nephew to America as a teenager in 1939. A no-holds barred civil rights activist, outspoken communist, and feared journalist, Mitford rose to one of the New Deal’s most notorious bureaucrats. For her the personal was political. She coined the term “frenemies,”  and as a member of the American Communist Party, she made several, though not among the Cold War witch hunters. When she left the Communist Party in 1958 after fifteen years, she promised to be subversive whenever the opportunity arose. True to her word, late in life she hit her stride as a writer, publishing nine books before her death in 1996. With unrestricted access to the Mitford Family archives, Leslie Brody presents a moving, impeccably researched biography of one of the most influential women of the 20th century.

Heidegger’s Glasses is a novel by Thaisa Frank that seems promising. Description—

Magical and surreal, Heidegger’s Glasses offers a completely original vantage point on the Holocaust.  The story opens during the end of World War II in a failing Germany coming apart at the seams. The Third Reich’s strong reliance on the occult and the leading officials’ obsession with the astral plane has led to the formation of a secret Compound of Scribes–multilingual translators that have been spared from deportation to answer returned letters written to the dead in the concentration camps. Ellie Schacten, the mysterious heroine of the novel, supervises the Scribes, yet secretly uses the compound to hide a steadily growing number of refugees. When a letter arrives, written by eminent German philosopher Martin Heidegger to his friend and optometrist––a man who is now lost in the dying thralls of Auschwitz––a series of events unfold that turn the Reich’s attention to the compound and threaten Ellie’s operation and the lives of the Scribes.

Based on the real Third Reich procedure, Operation Mail, which forced concentration camp prisoners to send letters to loved ones extolling conditions in the camps, Heidegger’s Glasses explores a dark, absurd world in which fear and death are a constant companion, and yet, Frank’s characters show how that when stripped of their freedom and virtually all material possessions, the human spirit perseveres and thrives. 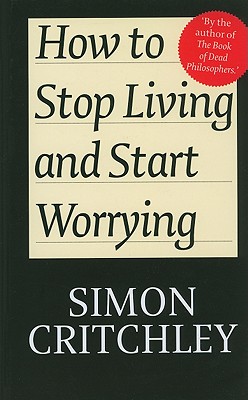 Simon Critchley’s latest book How to Stop Living and Start Worrying picks up where his last work, The Book of Dead Philosophers, left off. Both works explore what Critchley contends to be the signal problem of all philosophy; namely, how one might live a meaningful life against the backdrop of inevitable death. In Dead Philosophers, Critchley plumbed this question by surveying the deaths of dozens of famous philosophers, ultimately affirming a positive reality in death (both our own deaths and the deaths of others), and arguing that philosophies (and religions) that advocate the idea of a spiritual afterlife ultimately negatively disrupt human existence and lead to inauthentic lives. How to Stop Living reiterates these themes in a new form, essentially arguing that in asking “how to live,” we must also ask “how to die” — and also how to love and how to laugh. How to Stop Living takes form as a series of conversations between Critchley and Carl Cederström, an Associate Professor at the Institute of Economic Research at Lund University in Sweden. There’s a warm rapport between the pair, and although Critchley does most of the talking, there’s a genuine dialog in play, not merely a flat interview. The book unfolds over six chapters. The first, “Life,” is a discussion of, well, Critchley’s life, both personal and academic. I originally thought I’d be doing a lot of skimming here, but it’s actually kind of fascinating; more importantly, though, it establishes Critchley’s contention that a philosopher’s work cannot be divorced from his biography. To philosophize is to live. This idea is reiterated succinctly at the beginning of the second chapter, “Philosophy,” when Critchley states—

What follows in “Philosophy” is a somewhat discursive overview of the philosophers who will pop up again and again in the book: Heidegger, Husserl, Kant, Nietzsche, and, of course, Derrida. While I’m laundry listing, I might as well add Freud, Lacan, Beckett, and Hegel as key figures in How to Stop Living. In the third chapter, “Death,” Critchley discusses how many of these philosophers frame a subject’s individual relationship to his or her personal death. In a particularly enlightening passage, Critchley explains Heidegger’s “possibility of impossibility,” the idea that to be authentic, to lead an authentic life, one must internalize and master the finitude of a personal death. The chapter continues, working through other conceptions of death, including those of Freud, Beckett, and Derrida. Perhaps because of its dialogic structure, How to Stop Living often feels like a rap session, a big brainstorm, a work in process, and nowhere is this more evident in a chapter called “Love,” where Critchley moves from Hannah Arendt to The Song of Solomon to Lacan and Freud to a story about his marriage proposal. It’s all a bit messy, a bit watery, a bit undefined, and therefore difficult to summarize, so I’ll let Critchley dish on love in his own words—

Love is the attempt to break the logic of masochism that defines the subject, and to behave in a different way. That’s something that has to be wound up everyday . . . and it’s something with no end; and it requires a constant experience of faith. That’s the only sense I can make of love.

The next section, “Humour,” is better defined—and one of the highlights of the book. Critchley discusses jokes against a backdrop of psychoanalysis and anthropology, ultimately arguing that humor has the power to disrupt an individual’s relation to time or place, and thus reconstitute that relation in some meaningful way. Critchley’s book itself is indeed a meta-joke, a play against the sophistry of New Age self-help books. Indeed, the very name of the book is an inversion of Dale Carnegie’s 1948 “classic” of the genre, How to Stop Worrying and Start Living. If you find the cover of Critchley’s book as off-putting and cheesy as I do, just remind yourself that it’s a parody of Carnegie’s cover. And yet Critchley’s sense of humor is not ultimately black irony, but rather a humor of affirmation of — and confrontation of — the absurdity of contemporary life. It’s not irony but authenticity he wants. “Authenticity” is thus the final chapter of this relatively short book, and here Critchley invites his friend (and partner in the International Necronautical Society) novelist Tom McCarthy to participate in the conversation. The chapter is lively, almost frenetic, and frankly all over the place, as Critchley and McCarthy rocket from subject to subject — Finnegans Wake, the Challenger explosion, Terrence Malick, J.G. Ballard, Levinas, A Midsummer Night’s Dream, McCarthy’s first novel Remainder — each reference seems to slip into the next, reined in occasionally by Cederström, who steers the conversation back to its center (leave it to deconstructionists to get off center). Good stuff.

How to Stop Living and Start Worrying, despite its tongue in cheek title and cover, and its discursive flow, is serious (if playful) about philosophy. Those interested in the thinkers and topics I’ve mentioned in this review may be interested, but it’s not necessary for one to have a working knowledge of Continental philosophy to enjoy Critchley’s latest. Recommended.

How to Stop Living and Start Worrying is available now from Polity Books.