[Editorial note: Yeah. We know we posted this last year. We still like it though].

I’ve long been interested in Hergé’s Belgian comic series Tintin, which chronicles the adventures of Tintin, boy reporter, and his faithful dog Snowy. When a batch of hardback three-in-one editions showed up at my favorite used book store I picked up Vol. 3, which collects The Crab with the Golden Claws, The Shooting Star, and The Secret of the Unicorn. I read The Crab with the Golden Claws in one pleasant sitting that night and finished the other two adventures in similar fashion. Then I went back to the bookshop and picked up the other four three-in-one editions they had in stock.

It’s hard to divide the tales, which are all fun adventures in the high style of boy-adventuring, but I think Crab was my favorite of the three. It involves a drug smuggling ring and a trip to the Sahara desert. It also introduces Captain Haddock, an alcoholic lummox who tips into a verbose stream of insults whenever he’s in a rage (he merely stutters when in his cups). Haddock is Tintin’s unlikely (but totally likely) sidekick in the other tales in the volume, and he shows up in the other books I bought as well. The Shooting Star is a bit more sporadic in its plot–it begins with the end of the world (by asteroid!) and when that doesn’t pan out, moves into an ocean race to recover a meteorite. Unicorn also boasts a nautical theme; Tintin finds part of a treasure map in a model ship and fights against antique-collecting brothers to recover the booty (Keno Bros. beware). These adventure stories share more in common with Indiana Jones and Edgar Rice Burroughs than Marvel or DC comics; there’s a prevalent sense of danger, fun, and mystery that underscores the series. 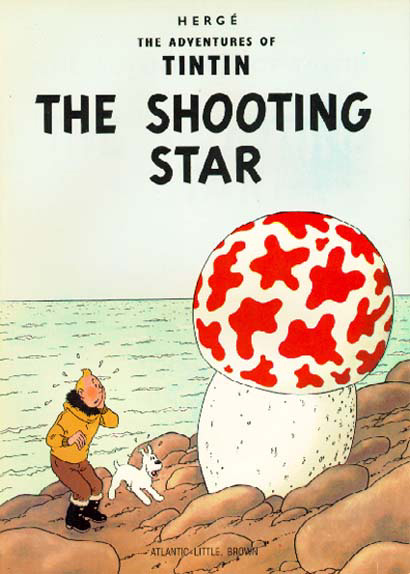 Hergé’s clean, efficient style evokes beautiful and strange worlds. His economy of storytelling is simply brilliant; he knows how to connote his characters’ movements–including some sweaty action sequences–and he also knows how to move the plot forward without resorting to talking heads (although you will find the occasional expository-friendly radio broadcast pop up in a Tintin comic). It’s when Hergé drops a luscious market scene or a crowded basement-dungeon larded with antiquities that the art in Tintin shines. Hergé’s great talent is to evoke a startling sense of place for each setting in his comics, a fully-realized set that creates a sort of visual (and emotional) baseline for the reader. This allows for the cleaner, crisper panels to relay action without clutter. Hergé’s knack for storytelling cannot be underestimated either. He blends high adventure with slapstick and verbal comedy, much of it courtesy Tintin’s foils: the Thompsons, bungling detectives, precisely, who provide Tintin with many of his cases; Haddock; and Snowy, of course.

If you know a bit about Hergé’s Tintin series, you may know that its depiction of non-white and non-European characters has come under attack in recent years; Tintin in the Congo has been singled out in particular. I haven’t read Congo, but Crab’s representation of  Arabs (and Asians) is riddled with all kinds of wrong–at least when viewed from a PC postmodern post-colonialist post-whatever perspective. Hergé’s comics reveal at times a particularly suspect Western European ideology, one that privileges white male authority in the form of white male adventure. We can see the same colonialism and Orientalism at work decades later in the Indiana Jones movies (particularly Temple of Doom). This comparison is not meant to indict Indy (or Spielberg, rather) or excuse Tintin (and Hergé); instead, I’m merely pointing out that adventure tales that feature white heroes exploring–and dominating–the Other are hardly new; nor have they disappeared. The big mistake would be not to read Hergé’s work for fear of tripping over politically-correct mores. Banning a book is never a smart practice.

Far better is Charles Burns’s recent Tintin revisionism in X’ed Out: he moves his inverted hero Nitnit to a bizarro world version of the Saharan market, a place teeming with strangeness that is also largely indebted to William Burroughs’s Interzone. The inversion reverses Tintin’s a priori white male domination into an equally fantastic (but far more horrific) vision of confrontation with radical Otherness. Shit gets weird (as alien encounters should). Nitnit is not in control, not the master of this domain, which is plainly not his. Burns’s Tintin revision saliently calls attention to the ways that the best in art might be transformed and reinterpreted. It points toward the subconscious inheritance intrinsic to art.

But back to the book I am ostensibly reviewing. The Adventures of Tintin, Vol 3 seems to me as good a place as any to start with Tintin, and those interested should dig in. These three-in-one editions are smaller than the traditional oversized format, but you can compensate by holding the book closer to your face (ah, intimacy). Lovely stuff.

Bourbon Island 1730, part funny animal graphic novel, part historical literature, recounts the story of Raphael Pommeroy who travels from France to Bourbon Island with his ornithology professor in search of a living dodo. On the journey to the French colony, Raphael becomes entranced by pirate tales, and when he arrives to Bourbon Island, he immediately tries to join up with some ex-pirates–unsuccessfully, of course. The French government has offered an amnesty to all pirates, and many have become successful plantation owners. However, their new wealth comes at the expense of the large population of slaves brought to Bourbon Island from Madagascar and Mozambique. The most interesting subplot of Bourbon Island 1730 involves a network of maroons, runaway slaves who have colonized their own villages at the top of the island’s treacherous terrain. When the notorious pirate Captain Buzzard is captured, some of the maroons plan to set him free and lead a revolt against the French colonials. In the meantime, the colonial authorities, including the scheming governor and the greedy priest, are trying to get Buzzard to reveal where he’s hidden a large cache of treasure.

Lewis Trondheim’s art strikes a nice balance between vivid detail and the classic funny animal style, and the book’s measured pacing delivers the story at a nice clip. Appollodorus and Trondheim never rush, taking the time to convey the cultural complexity of Bourbon Island–quite a feat, really, when you consider how much is going on here: the end of a pirate age, the horrors of slavery, and the problematics of colonization. Appollodorus and Trondheim envision Bourbon Island as a strange nexus of slavery and freedom, piracy and central authority, of the meeting of the cultures of Africa, India, and Europe. Leading man Raphael is a hopeless romantic who pines wistfully for the absolute freedom he sees as the life of a pirate and the natural right of all men. And yet, as the book makes clear, idealism can rarely stand up to the corrosive complexity of the real world.

With twelve pages of endnotes, Bourbon Island 1730 is just the kind of well-researched historical fiction that would fit neatly into any post-colonial studies course. There’s only one major fault with the book: it ends too quickly. Appollodorus and Trondheim have too many fascinating subplots that they don’t bother to resolve. While we have no problem with ambiguous conclusions, Bourbon feels simply rushed at the end, as it sprints to a virtual non-conclusion. We would’ve been much happier with a cliff-hanger and a promise of a part two. Nonetheless, anyone interested in colonialism and post-colonial studies should check out this book.