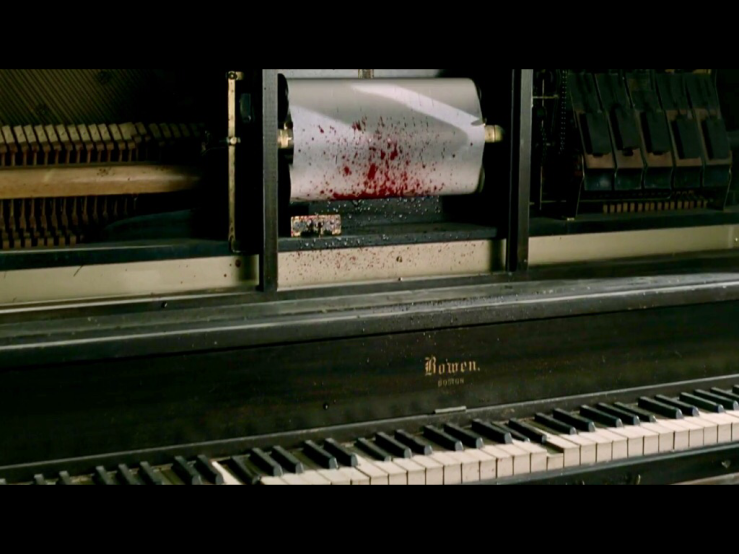 Watching HBO’s new show Westworld, I couldn’t help but think of the late American novelist William Gaddis’s obsession for player-pianos. The narrator of Gaddis’s final novel Agapē Agape howls that the player piano “was the plague spreading across America…its punched paper roll at the heart of the whole thing, of the frenzy of invention and mechanization and democracy and how to have art without the artist and automation, cybernetics.” Here was the idea of art, the artifice of art. Spiritless spirit. Automation.

Director Jonathan Nolan threads these automaton player pianos throughout “The Original,” Westworld’s ironically-titled pilot episode. The motif is a perhaps-unsubtle reminder of Westworld’s core conflict—automation vs. spirit, real vs. copy, authentic vs. simulation. Human vs. machine.

You know the story of course: whether from Westworld’s source material (Michael Crichton’s 1973 film of the same name), or from Ridley Scott’s Blade Runner or Philip K. Dick in general, or The Matrix, or Battlestar Galactica (original or reboot), or Pinocchio, or AI, or Pygmalion, or Baudrillard, or just generally being alive in the 21st century….or…or…or…you know the story of course. (Oh, and, uh westerns too, natch).

Knowing the story enriches this particular reboot (or reimagining or re-whatever) of Westworld’s pregnant possibilities, and “The Original” is at its finest when tweaking its tropes.

For example, James Marsden’s fresh-faced Teddy Flood arrives to Westworld a noob, a surrogate for the audience—just another “Newcomer,” a human tourist among the amusement park’s android “Hosts” looking for fun and trouble, right? An early reveal shows that he’s actually a Host too though (gadzooks!), an automaton pining after fresh-faced series lead Evan Rachel Wood’s Dolores Abernathy. (I suppose having a fresh face is easy when the lab operatives can grow you a new one each night).

The bait-and-switch gambit with Flood plays out in a riveting scene with ringer Ed Harris, the Man in Black, hardly a “Newcomer” and a seemingly unwelcome guest. He reveals that he’s been coming to Westworld for “over thirty years,” and we later learn that the theme park’s automatons haven’t had major glitches in (You guessed it!) thirty years. “We’re overdue,” says Westworld’s operations manager, Theresa Cullen (played by Sidse Babett Knudsen–and by the way, that quote’s from my bad memory so don’t quote me on it). Foreshadowing! With the Man in Black creepin’ ’round and takin’ automaton scalps Blood Meridian style, there’s sure to be trouble!

But wait—Westworld can make its own trouble for its own damn self without mysterious outside agents, thank you very much. Dr. Ford (played by Anthony Hopkins, another ringer, and please don’t make me comment on the symbolically-overdetermined character name) has updated the “Hosts” with a new operating system, which includes a new program for “reveries.” These reveries have the replicants all fucked up. In short, the automatons, the Hosts, start going off-script (literally)—asking philosophical questions about the nature of their reality (and pouring milk over corpses).

Ford doesn’t care though—as he explains to Jeffrey Wright’s Bernard Lowe (Westworld’s head programmer), humanity, what with curing all its diseases, etc., can’t progress anymore — “This is as good as we’ll get.” So, like, why not trigger the Singularity? To return to our player piano motif, if only momentarily, Ford would like to inspirit art into the artificial. He wants, or at least moments of “The Original” suggest he wants, to teach the Hosts to play.

But the security forces behind the scenes decide it’s probably not good for their guests to be subjected to unknown quirks. They remand some of these suspect automatons to a creepy Bluebeard’s closet full of other decomissioned replicants that surely won’t be any kind of problem down the line in Westworld, right?

As my quick overview suggests, Westworld brims with potential. Indeed, “The Original,” despite a tight plot, often feels overpacked. There’s not just a season’s worth of plot lines lurking in here, but a whole series’ worth. As a result, “The Original” leaves many interesting characters on the margins for now (Thandie Newton’s brothel madam in particular).  I suppose keeping key players on the sidelines makes sense, especially as the pilot is exposition-heavy as it is (a fault with any number of TV pilots, from Game of Thrones to The Sopranos. Not every show can emerge autochthonous and fully-realized out of the gate like True Detective).

And yet even stuffed with emerging plots, Westworld finds time for a cinematic shooting-slaughter sequence that I suppose many viewers found thrilling but I found admittedly cold. With zero stakes at this early point, the scene felt like any other American TV show where meaningless bodies are gunned to pieces. Maybe that was the point though?

In any case, the punchline to the shooting sequence—one of the Newcomers (a prototypical Ugly American doof) Saves the Day! right before the baddie-Host can give his Big Speech—the punchline didn’t make me laugh so much as grimace. “The Original” is full of tonal inconsistencies and missed opportunities for sharp satire and dark humor. I hope Westworld loosens up a bit, gets a bit weirder, bites more from J.G. Ballard’s playbook. The pilot seems to go for profundity over weirdness, as if the showmakers must telegraph at all times: This is a Dark Serious Show. (Did I mention that director and creator Jonathan Nolan is Christopher Nolan’s brother?).

If the arcade shooter sequence is a dud (or, rather, the simulacrum of a real shootout, an authentic inauthenticity), the final scenes of “The Original” make up for it. In an echo of Blade Runner’s final sequence, Hopkins’s Ford squares off with his creation, Dolores’s father Peter. Peter has found a photograph depicting a girl in Times Square, and the cognitive dissonance of this unreality has him goin’ straight-glitch, quotin’ Shakespeare, and generally blowin’ android gaskets. We find out he’s been rebooted a number of times, and was once the leader of a cannibal cult in a Westworld scenario called “The Dinner Party.” (Har har! That pun works on at least two levels). Peter perhaps has realized he’s but a player in play—but not a true player, just a copy of a player, a simulacrum.

Westworld is acutely aware of its own layers of simulacra. The show constantly calls attention to itself as a show, as a play. Early in “The Original,” the camera pulls up from travelers on a train to reveal a god’s-eye diorama of the terrain—a moving diorama that recalls the intro to Game of Thrones (the show Westworld would replace in your hearts and on your screens). The Westworld is surveyed by producers and showrunners making adjustments—just like Westworld. We have here a metacommentary on television, a self-consciously postmodern (and thus, post-postmodern) gesture. Not just automation and artifice, but artists! Not just player pianos, but players!

The diorama shot also reveals the Big Dream embedded in Westworld’s Big Nightmare. We have here that mythic American promise: The Frontier, the Territory that Huck Finn swears to light out to in order to duck the constraints of those who would “sivilize” him. “I take SPACE to be the central fact to man born in America,” declared Charles Olson in the beginning of Call Me Ishmael, his study of Melville’s whale. “I spell it large because it comes large here. Large, and without mercy.” The Newcomers, the tourists, flock to Westworld because it is a safe and constrained territory, a SPACE that is sivilized, yet masked to appear otherwise, garbed in the myth of danger, the empty promises of our National Pastimes, Sex & Violence. Dr. Ford plants reveries—dreams—into his automatons, disrupting civilization’s veneer of order. This is the new Frontier that Westworld promises to explore.

8 thoughts on “A riff on the Westworld pilot, “The Original””