Had Goodman Brown fallen asleep in the forest, and only dreamed a wild dream of a witch-meeting?

Nathaniel Hawthorne’s “Young Goodman Brown” was thrumming through my head the second time I watched “Chestnut,” the second episode of Westworld. In Hawthorne’s classic American tale, a naive youth ventures into the dark evil woods—for reasons never fully expressed—and witnesses his community’s Satanic inversion: Witches and wizards and a “devilish Indian behind every tree.” The narrator’s gambit (Was it all just a dream?) doesn’t ultimately matter—Brown’s experience irrevocably change him. He crosses the threshold of his domestic door, traipses into unknown terrors, and becomes a new person.

Last week, in my review of Westworld’s pilot, I wrote that the series engages “that mythic American promise: The Frontier, the Territory that Huck Finn swears to light out to in order to duck the constraints of those who would ‘sivilize’ him.” For Twain the territory is freedom; for dark Hawthorne the frontier is freedom’s dark twin terror. We find a bit of both in this episode of Westworld. (Along with wizards and Indians).

Our naive youth here is William (Jimmi Simpson). William arrives at Westworld for the first time, “guided” by his loutish friend Logan, who chooses to “go straight evil” (if I may echo a guest’s line from last week). Westworld’s pilot episode pulled a bait-and-switch last week, presenting Teddy Flood (James Marsden) as the naive youth, new to town, only to reveal that he is actually an automaton, a “host.” William provides a more traditional audience surrogate, and his opening sequences are closer to what we might expect from a traditional pilot episode. William’s entering Westworld also feels a bit like the beginning of a video game. (Westworld often feels like a video game. I mean that as a compliment).

We enter the Westworld with William; we savor the bespoke attire he’s offered; we glance with apprehension and desire at the guns on display. In a pivotal shot, William—and perhaps the audience—must make an important choice: White hat—or black? Will crossing the threshold change William too? Yes. Of course. It’s a television show. For Hawthorne’s hero the results were dire: “A stern, a sad, a darkly meditative, a distrustful, if not a desperate man, did he become, from the night of that fearful dream.” Maybe Westworld will find a more optimistic path for William.

But this isn’t a show that’s generally optimistic about domesticity. In the pilot episode, we saw that one android father can simply be swapped out for another android father. (Mothers, android or otherwise, remain absent). In the one glimpse of a full family we get in that episode, we hear the father advise that crossing the river is “too adult” for the son. The Territory is a wild space ripe for masculine domination. Westworld continues the American fantasia of exploration and destiny-manifestin’.

“Chestnut” continues Westworld’s breaking down of familial order in two plot lines that seem to converge. In one such plot, The Man in Black (Ed Harris) kills the cousins and then the wife of a host he claims is an “old friend.” (More on the Man in the Black in a moment). In a second plot line, told mostly in nightmare-flashback mode, Thandie Newton’s character Maeve is a mother whose family is apparently killed by Indians. (More on the convergence of these plotlines in a moment too).

I was happy to see Maeve get screentime this week. Her nightmares throughout “Chestnut” echo Hawthorne’s observation that our dreams alter our realities, that our night-consciousness is vital, real. (Perhaps this is Dr. Ford’s design when he injects “reveries” into his automaton’s new programming system in Westworld’s pilot). Maeve’s dreams begin to affect her work performance, so she’s hauled repeatedly into Westworld’s underground body shop for reconditioning—and a possible decommissioning. Maeve delivers the same monologue three times to different guests in the episode. Each segment feels like a separate audition, the producers leering offstage. Westworld again draws attention to its own form, its metatextuality, its “TV-showness,” as it were. 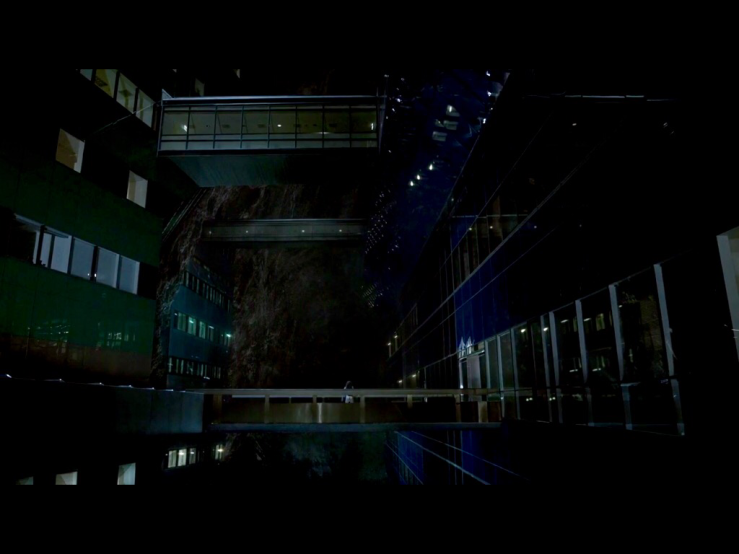 Maeve’s “truest” performance comes underground—she somehow bypasses “sleep mode” and wakes up in the middle of the (real) nightmare: the Westworld labs and body shops. In an echo of the scalping motif that slices through the episode, Maeve grabs a scalpel and takes off, running deeper into the nightmare. The sequence is aesthetically arresting, wonderfully weird, and ultimately devastating when she finally happens upon the heaped bodies of her android fellows. Maeve’s underground odyssey furthers the Big Plot of Westworld thus far: How much consciousness–and self-consciousness –do these androids have? I’m digging how the series takes on memory, dream, and reality. Maeve’s performance is under pressure specifically because Lee Sizemore, Westworld’s narrative director (ahem, head writer), wants to cull dead weight to make room for his new campaign, “Odyssey on the Red River.” Sizemore, who we’re invited to view as a kind of Hollywood hack asshole, assures the assembled management team that this new storyline’s grotesque savagery (meta meta meta) will make it look like “”Hieronymous Bosch was doodling kittens.” Sizemore’s smugly assured that Dr. Ford, who hasn’t commented on the story in years, won’t interfere. So of course Ford shoots him down.

Ford is the true magician of Westworld. He regards Sizemore as a huckster, a fraud peddling cheap tricks. Ford blasts Sizemore’s claim that Westworld will “tell the guests who they are,” arguing that Westworld’s true potential is to transform and transmute the guests into what they can be. Ford notes at one point in the episode that the guests crave nuance, subtlety, mystery. They want witchcraft; they want a spell that transmogrifies chaos into magic.

Where does Ford’s magic come from? Boredom! In a wonderful discussion with (what I’m assuming simply has to be) a replicant version of himself as a child, Ford twists the old idiom and suggests that “only boring people cannot conceive of boredom.” He guides the replicant child to a desert vision of the “Town with the White Church,” pointing to the imaginative possibility of the Territory—to the frontier’s magic. The Black Sabbath in the wilderness is all in the wizard’s mind. “You see what a bored mind can conjure,” Ford tells the boy, and then charms a snake, declaring, perhaps a bit glumly, that, “Everything in this world is magic, except to the magician.” Ford dismisses the boy, and later brings Bernie Lowe (Jeffrey Wright) up to the surface to survey the desert terrain, the rocks where he will build this church. (Bernie dons a brown baseball cap. No black or white stetson for Bernie). 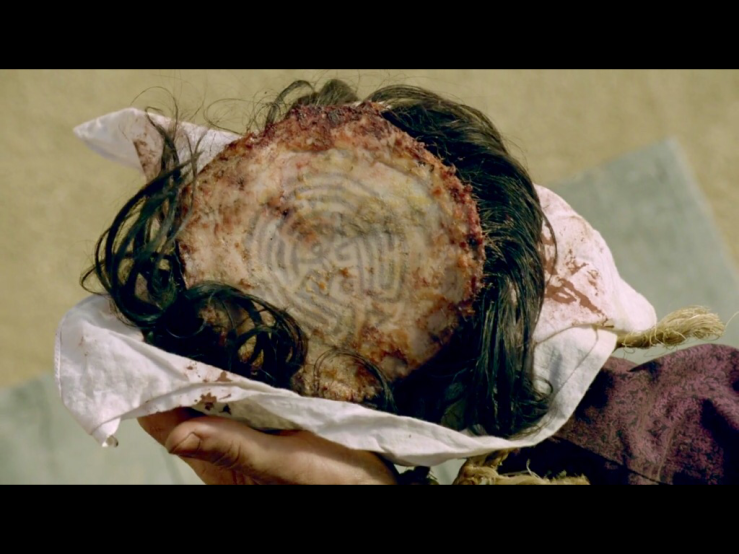 But The Man in Black: He’s pure Black Hat. Compellingly, Dr. Ford’s thoughts on subtlety and magic parallel The Man in Black’s. (White wizard/Black wizard?). “When you’re suffering, that’s when you’re most real” he snarls at an automaton he’s interrogating, echoing Emily Dickinson’s “I like a look of agony / Because I know it’s true.”

The Man in Black’s back in town, not a stranger, in search of something called The Maze, willing to scalp androids, smash families, kill cousins, wives, daughters, etc. to get clues—ah but wait, I’m forgetting, They’re just androids, right?

Is The Man in Black an android too?

“I’ve been coming here for 30 years,” he reminds us. (Westworld  wants us to remember this three-decade benchmark—recall that the last time the park faced trouble was thirty years ago). But then, and perhaps without much of that magic subtlety, he tells us: “In a sense, I was born here.” Egads! 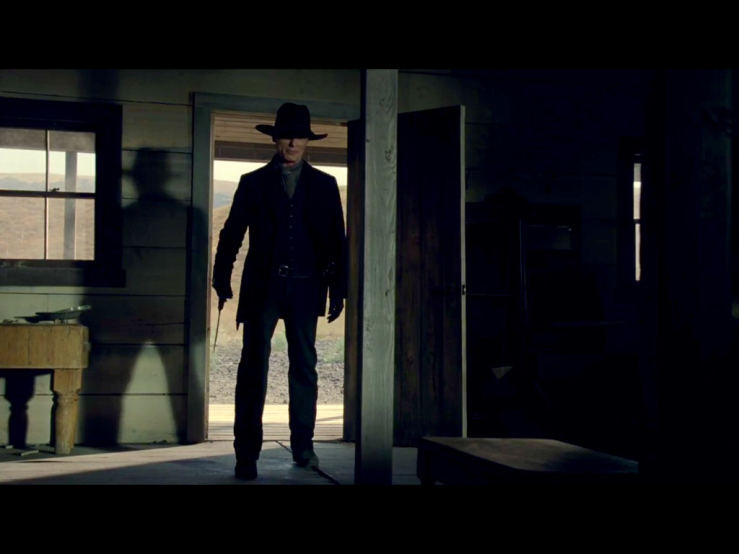 Black’s plot converges with Maeve’s nightmare in a Satanic reverie. Indian marauders have chased Maeve and her (dream)daughter into a cabin corner; one enters and shape-shifts into The Man in Black, knife out, ready to scalp her.

Is this now? Is this then? Is this real? Is this dream?

I started with Hawthorne’s “Young Goodman Brown,” so I’ll end with it. The Man in Black—but also Dr. Ford, perhaps—recall to me Brown’s traveling companion into the woods (lovely dark and deep), an old wizard who bears “a considerable resemblance” to the young (good?)man. The old mage steers YGB deeper into the Frontier, into the Territory, into the Weird, and he protests about going over the line:

“Too far, too far!” exclaimed the goodman, unconsciously resuming his walk. “My father never went into the woods on such an errand, nor his father before him. We have been a race of honest men and good Christians, since the days of the martyrs. And shall I be the first of the name of Brown, that ever took this path and kept–”

“Such company, thou wouldst say,” observed the elder person, interrupting his pause. “Well said, Goodman Brown! I have been as well acquainted with your family as with ever a one among the Puritans; and that’s no trifle to say. I helped your grandfather, the constable, when he lashed the Quaker woman so smartly through the streets of Salem. And it was I that brought your father a pitch-pine knot, kindled at my own hearth, to set fire to an Indian village, in King Philip’s War. They were my good friends, both; and many a pleasant walk have we had along this path, and returned merrily after midnight. I would fain be friends with you, for their sake.”

Hawthorne here lays out an American history of religious persecution, the murder of indigenous peoples, and hypocrisy, themes that find their echo in Westworld’s continuation of the American myth.

Or maybe it’s the Territory itself, the dream/nightmare of the Frontier:

America is not a young land: it is old and dirty and evil before the settlers, before the Indians. The evil is there waiting.