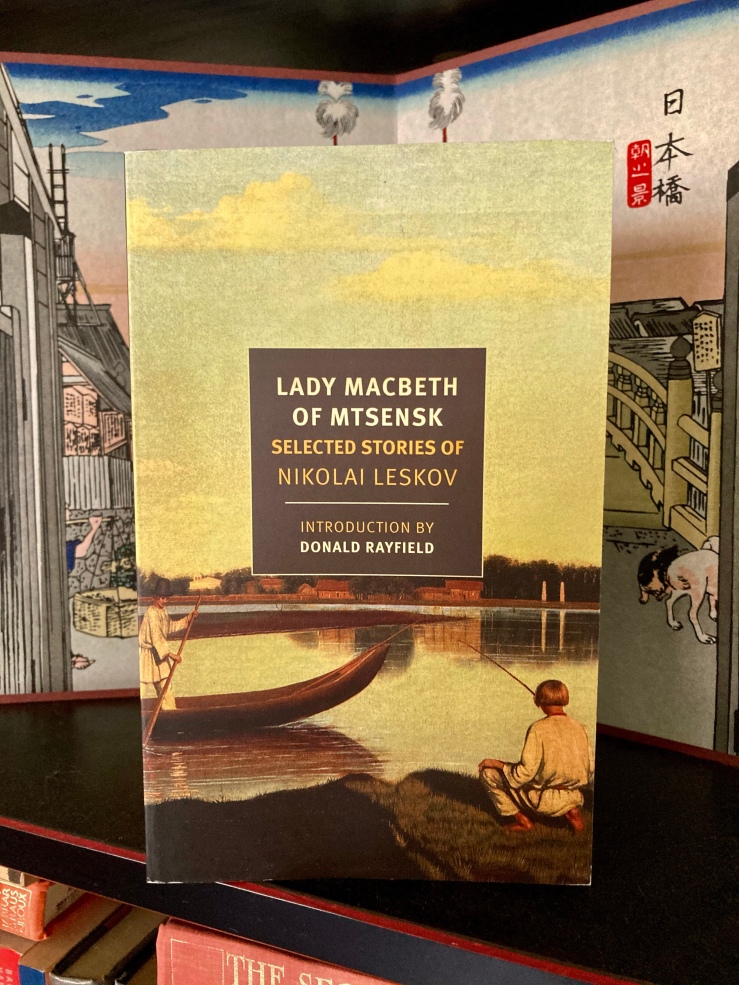 Nikolai Leskov is the strangest of the great Russian writers of the nineteenth century. His work is closer to the oral traditions of narrative than that of his contemporaries, and served as the inspiration for Walter Benjamin’s great essay “The Storyteller,” in which Benjamin contrasts the plotty machinations of the modern novel with the strange, melancholy, but also worldly-wise yarns of an older, slower era that Leskov remained in touch with. The title story is a tale of illicit love and multiple murder that could easily find its way into a Scottish ballad and did go on to become the most popular of Dmitri Shostakovich’s operas. The other stories, all but one newly translated, present the most focused and finely rendered collection of this indispensable writer currently available in English.

The collection includes six novellas: Lady Macbeth of Mtsensk, The Sealed Angel, The Enchanted Wanderer, The Steel Flea, The Unmercenary Engineers, and The Innocent Prudentius.

I read a few of these stories some years back in a Borzoi collection of Leskov stories called The Enchanted Wanderer and Other Stories; those translations were by Richard Pevear and Larissa Volokhonsky (and included some much shorter tales).

I also highly highly recommend Lady Macbeth, director William Oldroyd and writer Alice Birch’s 2016 film adaptation of Leskov’s Lady Macbeth of Mtsensk, which I reviewed on this blog a few years ago.

Spare, dark, cruel, and unflinching, Lady Macbeth (2016) uncoils with an austere beauty that belies its dark core. Set in rural England in 1865, the film is the story of Katherine, a young wife essentially imprisoned by her cruel father-in-law and warped husband who try to confine her inside their drafty country estate.

Katherine would rather take her freedom in the fresh chilly air of the heath, but father-in-law Boris wants her inside, preferably laboring at creating a male heir, a task made nearly impossible by her older husband Alexander’s apparent impotence. Boris and Alexander use a housemaid named Anna to monitor Katherine, and when the father and son have to depart on separate business matters, Anna is left to watch over the bored young bride.

Katherine’s situation becomes much less boring when, only a day or two after the departure of Boris and Alexander, she discovers Anna naked in a sack suspended from the ceiling of a kennel, surrounded by jeering men. Katherine frees the maid and asserts her dominance as lady of the house, even as she has to tussle with one of the men, Sebastian. The scene is utterly Sadean, a strange mix of sexuality, violence, and the thin veneer of social mores that glosses over the id writhing under the surface. The veneer cracks. Our Lady takes up a poorly-hidden (and then not-really-hidden-at-all) affair with Sebastian. To reveal more could spoil the story, but, like, you know some of the stuff that happens in Macbeth, right? Murders and stuff?

While Lady Macbeth recalls Shakespeare’s tragedy at times, it’s actually an adaptation of Nikolai Leskov’s 1865 novella Lady Macbeth of the Mtsensk District. (I read and enjoyed an English translation by Richard Pevear and Larissa Volokhonsky a few years back). Director William Oldroyd and writer Alice Birch offer a fairly faithful adaptation of Leskov’s story, although the film’s tone is much darker and devoid of Leskov’s black humor. The film’s conclusion is also darker and more concise than Leskov’s novella’s last chapters (and better, I’d argue). Lady Macbeth’s final moments offer a chilling indictment of Victorian morality (a moral vision that continues to persist in many ways today) without the slightest concession to a mainstream audience’s desire for, say, justice. The film begins dark and strange and ends darker, stranger. Watching Lady Macbeth is a bit like having one’s stomach squeezed from the inside out.

The film’s disturbing tension is not for everyone, but those folks would miss a fantastic performance by Florence Pugh, who plays Katherine with a sensitivity that is both captivating and menacing. One of the great successes of Lady Macbeth is watching Pugh perform a character who moves from emotion to impulse to action–or in some cases radical inaction—in a thoroughly naturalistic way. Oldroyd’s direction is key here; perhaps the most terrifying thing about Lady Macbeth is how natural the film feels. Cinematographer Ari Wegner seems to shoot the film almost-entirely with natural light (and occasionally gaslight), an effect that is simultaneously gorgeous and starkly unsettling. Lady Macbeth would make a perfect double feature with Sofia Coppola’s The Beguiled (2017). The film’s repetitions of interiors—often with Katherine staring out—readily recall Danish painter Vilhelm Hammershøi’s work.

Lady Macbeth creates its own visual grammar to tell its story, deploying dialogue between characters with a spare efficiency that helps build the film’s anxious mood. Extradiagetic sound is virtually nonexistent in the film, too. A slow ominous rumbling swells up exactly three times in Lady Macbeth, matching and then intensifying the viewer’s nervous dread. The final credits play out over the sounds of birds chattily chirping. It’s all very disconcerting.

As I’ve noted (and which I hope is clear from this write-up), Lady Macbeth’s mix of strange Sadean sex and violence isn’t for everyone. It’s the kind of film that will likely disappoint or even upset many viewers—those looking for a Victorian-period romance should look elsewhere, and fans of straightforward horror might not get the tropes they crave. But folks interested in an unnerving but compelling story told on its own aesthetic terms should check this one out.

How I watched it: On a big TV via a streaming service, somewhat late at night, at least for my wife and me. My wife loved it, by the way, and best of all, she loved it despite her usual rubric—she says she doesn’t like films where “nothing good happens.” Maybe something good happens in Lady Macbeth, but the good is so wrapped up in the bad that the two are impossible to parse.