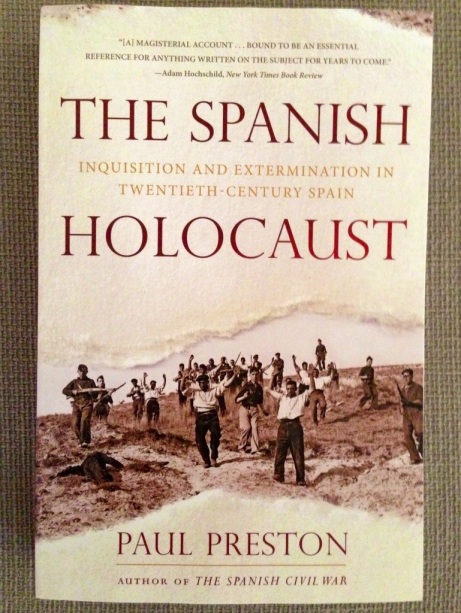 Long neglected by European historians, the unspeakable atrocities of Franco’s Spain are finally brought to tragic light in this definitive work.

The remains of General Francisco Franco lie in an immense mausoleum near Madrid, built with the blood and sweat of twenty thousand slave laborers. His enemies, however, met less-exalted fates. Besides those killed on the battlefield, tens of thousands were officially executed between 1936 and 1945, and as many again became “non-persons.” As Spain finally reclaims its historical memory, a full picture can now be given of the Spanish Holocaust-ranging from judicial murders to the abuse of women and children. The story of the victims of Franco’s reign of terror is framed by the activities of four key men-General Mola, Quiepo de Llano, Major Vallejo Najera, and Captain Don Gonzalo Aguilera-whose dogma of eugenics, terrorization, domination, and mind control horrifyingly mirror the fascism of Italy and Germany.

Evoking such classics as Gulag and The Great Terror, The Spanish Holocaust sheds crucial light on one of the darkest and most unexamined eras of modern European history.

And, from Adam Hochschild’s review last year in The New York Times:

An eminent and prolific British historian of modern Spain, Preston says this was “an extremely painful book to write.” It is also, unlike several of his other works, a difficult book to read. The newcomer to Spanish history will nowhere learn the difference between the Assault Guard and the Civil Guard, or between a Carlist and an integrist. Chapters roll on for 40 or 50 pages without a break. A blizzard of names of thousands of perpetrators and the towns where they carried out their tortures and killings overwhelms the reader. “The Spanish Holocaust” is not really a narrative but a comprehensive prosecutor’s brief. With its immense documentation — 120 pages of endnotes to both published and unpublished material in at least five languages, including corrections of errors in these sources — it is bound to be an essential reference for anything written on the subject for years to come.

“A Happy Wanderer” by Joseph Conrad

Converts are interesting people.  Most of us, if you will pardon me for betraying the universal secret, have, at some time or other, discovered in ourselves a readiness to stray far, ever so far, on the wrong road.  And what did we do in our pride and our cowardice?  Casting fearful glances and waiting for a dark moment, we buried our discovery discreetly, and kept on in the old direction, on that old, beaten track we have not had courage enough to leave, and which we perceive now more clearly than before to be but the arid way of the grave.

The convert, the man capable of grace (I am speaking here in a secular sense), is not discreet.  His pride is of another kind; he jumps gladly off the track—the touch of grace is mostly sudden—and facing about in a new direction may even attain the illusion of having turned his back on Death itself.

Some converts have, indeed, earned immortality by their exquisite indiscretion.  The most illustrious example of a convert, that Flower of chivalry, Don Quixote de la Mancha, remains for all the world the only genuine immortal hidalgo.  The delectable Knight of Spain became converted, as you know, from the ways of a small country squire to an imperative faith in a tender and sublime mission.  Forthwith he was beaten with sticks and in due course shut up in a wooden cage by the Barber and the Priest, the fit ministers of a justly shocked social order.  I do not know if it has occurred to anybody yet to shut up Mr. Luffmann in a wooden cage.I do not raise the point because I wish him any harm.  Quite the contrary.  I am a humane person.  Let him take it as the highest praise—but I must say that he richly deserves that sort of attention. END_OF_DOCUMENT_TOKEN_TO_BE_REPLACED

She had big breasts, slim legs, and blue eyes. That’s how I like to remember her. I don’t know why I fell madly in love with her, but I did, and at the start, I mean for the first days, the first hours, it all went fine; then Clara returned to the city where she lived, in the south of Spain (she’d been on vacation in Barcelona), and everything began to fall apart.

One night I dreamed of an angel: I walked into a huge, empty bar and saw him sitting in a corner with his elbows on the table and a cup of milky coffee in front of him. She’s the love of your life, he said, looking up at me, and the force of his gaze, the fire in his eyes, threw me right across the room. I started shouting, Waiter, waiter, then opened my eyes and escaped from that miserable dream. Other nights I didn’t dream of anyone, but I woke up in tears. Meanwhile, Clara and I were writing to each other. Her letters were brief. Hi, how are you, it’s raining, I love you, bye. At first, those letters scared me. It’s all over, I thought. Nevertheless, after inspecting them more carefully, I reached the conclusion that her epistolary concision was motivated by a desire to avoid grammatical errors. Clara was proud. She couldn’t write well, and she didn’t want to let it show, even if it meant hurting me by seeming cold.

(Read the rest at The New Yorker)