“Most animals live a short while,” said Ulrich, “but I had a revelation. That we cannot know the intensity of their lives, which is hundreds of times more attuned than ours. They don’t talk because they don’t need speech. A dog, when it puts its head out a car window, smells almost everything in a county, a world we never even suspect and have no description for. That is why I am daft. I have flown and smelled the smells, Carl Bob. I have known life by my nose. That’s why the dog looks so ecstatic sniffing in the wind. They smell a thousand times more than we do. We could only know it as hallucinatory sense. Dogs are in space and time. We can only know one or the other, plodding, toddling. Not to mention hearing. And taste. Water is fifty times more delicious to them. We must not pity them, a cheap passive hobby. They live huge lives before they die. Watch how happy sleep is to them, and right next to waking. They live both at once. We are predators not only of meat but of essence, my friend. We want to be them because they have spoken to us without speaking and we can hardly bear their superiority.”

The sheriff was doing a five-minute commentary on the Weekend Review on television Saturday night. Both Dee and Melanie watched.

“The world is full of middle-aged men who seek revenge. The anger passes for most when they see there is no way. The rate of incarceration is very low for first-time offenders of sixty. For some, there is a bigger engine of hate even then, running at the red line and very vigilant toward what they might consider insults or even bossiness. They aren’t just having it, the engine, like the others. They are it. They have not been aware of this, and their acts confound them. Those are ones you see on television or in the newspapers discussing sodomy, rape, kidnapping and murder in the passive voice, something happened, somebody was killed and so on, sometimes even giggling. ‘Mistakes were made, yes, when she was killed. I can’t remember, really.’ Such as that.”

Ulrich had been quiet, painting on deck varnish. Now he spoke. “We don’t love each other as much as we used to. You can see the uncertain looks, the calculations, the dismissals. People are not even in the present moment. Everybody’s been futurized. You look in those eyes and see they’re not home, they’re some hours ahead at least. I hate to go into Vicksburg anymore. Anywhere, really. It’s all like meeting people who have just departed. Old men and women don’t look wise anymore. They are just aged children. And who gets the highest pay? Actors. Paid to mimic life because there is no life. You look at everybody and maybe they’re a little sad, some of ’em. They’re all homesick for when they were real.” Ulrich began painting again as the others tried to guess what could have prompted this. 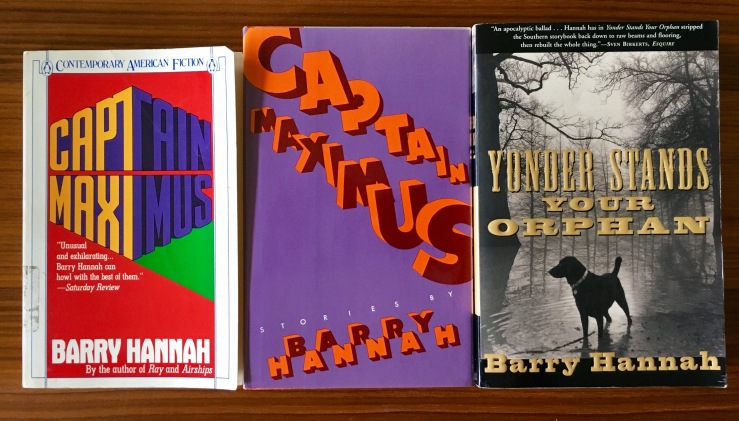 Earlier this summer I visited Alias East Books East in Los Angeles, where the clerk kindly let me handle a signed first edition of Barry Hannah’s novel Ray. It was like sixty bucks, so I didn’t handle it too fondly. But somehow the image of the signature rattled around in my silly skull all summer—probably because I spent a big chunk of July slurping up Long, Last, Happy. I wanted to find out some info about Hannah’s last quartet of stories—the last four stories in L, L, H—and doing a search of his name in Twitter led me to a link for a signed first-edition hardback copy of his slim 1985 collection Captain Maximus. (The title is a joke on his then-editor, Gordon “Captain Fiction” Lish, who apparently Hannah referred to as “Captain Minimus” in some of their letters). I might have had a scotch or two, but I bid on the book (eighteen bucks). No one else bid on it, so it’s mine now.

The cover is lovely, purple and orange, designed by Fred Marcellino, and under the bright shiny jacket is this: 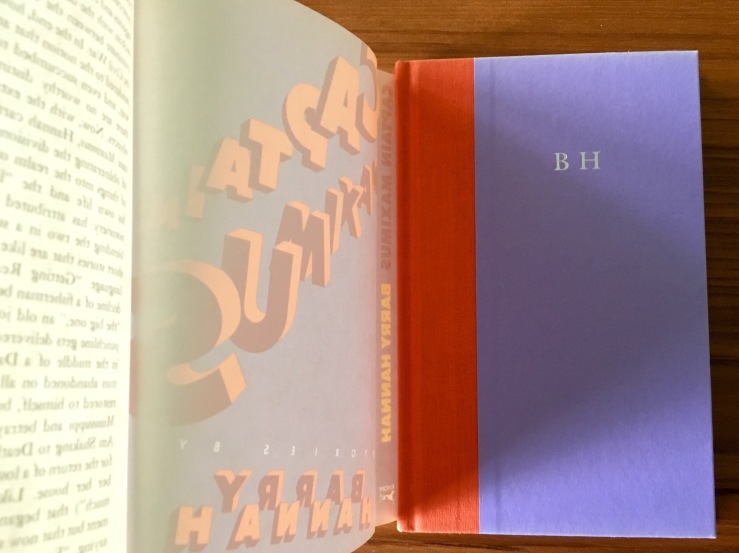 I love the reserved arrogance of those initials!

And of course the signature, dated five years after the book’s publication and geographically anchored to the town my grandfather and namesake attended college in— 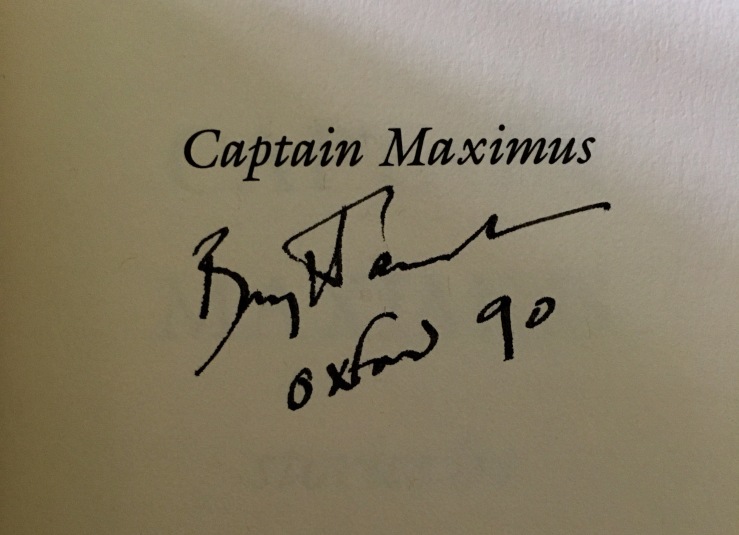 I didn’t actually own a copy of Captain Maximus beforehand, and I think the only stories from it included in Long, Last, Happy (which, by the way is a great starting place for Hannah) are “Fans,” “Ride, Fly, Penetrate, Loiter” and “Even Greenland” (you can read “Even Greenland” at Ben Marcus’s website). This particular copy has clearly never been read.  Which leads me to this afternoon. I went to my favorite used bookstore to pick up a copy of Ishmael Reed’s The Terrible Threes—I just finished The Terrible Twos, a novel that is too prescient and too funny and too cruel and you should read it read it read it—and well anyway, I went to see if maybe they had a copy of Yonder Stands Your Orphan, which they didn’t the last time I was there, but they did today. Under it was a well-thumbed 1986 Penguin paperback edition of Captain Maximus. I need to read Yonder (which hell by the way my god what a bad cover c’mon people) before I can write the Thing I want to write on the final stories in Long, Last, Happy (or at least I think I need to read it, or anyway, I want to). And the second copy of Captain Maximus, at three dollars in store credit, is something I don’t have to worry about cramming into a pocket or dropping into a bathtub or eventually giving away to a friend.