Towards the end he sailed into an extraordinary mildness,
And anchored in his home and reached his wife
And rode within the harbour of her hand,
And went each morning to an office
As though his occupation were another island.

Goodness existed: that was the new knowledge.
His terror had to blow itself quite out
To let him see it; but it was the gale had blown him
Past the Cape Horn of sensible success
Which cries: “This rock is Eden. Shipwreck here.”

But deafened him with thunder and confused with lightning:
–The maniac hero hunting like a jewel
The rare ambiguous monster that had maimed his sex,
The unexplained survivor breaking off the nightmare–
All that was intricate and false; the truth was simple.

Evil is unspectacular and always human,
And shares our bed and eats at our own table,
And we are introduced to Goodness every day,
Even in drawing-rooms among a crowd of faults;
He has a name like Billy and is almost perfect,
But wears a stammer like a decoration:

And every time they meet the same thing has to happen;
It is the Evil that is helpless like a lover
And has to pick a quarrel and succeeds,
And both are openly destroyed before our eyes.

For now he was awake and knew
No one is ever spared except in dreams;
But there was something else the nightmare had distorted–
Even the punishment was human and a form of love:
The howling storm had been his father’s presence
And all the time he had been carried on his father’s breast.

Who now had set him gently down and left him.
He stood upon the narrow balcony and listened:
And all the stars above him sang as in his childhood
“All, all is vanity,” but it was not the same;
For now the words descended like the calm of mountains–
–Nathaniel had been shy because his love was selfish–
Reborn, he cried in exultation and surrender
“The Godhead is broken like bread. We are the pieces.”

And sat down at his desk and wrote a story.

“The Unknown Citizen” by W.H. Auden—

He was found by the Bureau of Statistics to be
One against whom there was no official complaint,
And all the reports on his conduct agree
That, in the modern sense of an old-fashioned word, he was a
saint,
For in everything he did he served the Greater Community.
Except for the War till the day he retired
He worked in a factory and never got fired,
But satisfied his employers, Fudge Motors Inc.
Yet he wasn’t a scab or odd in his views,
For his Union reports that he paid his dues,
(Our report on his Union shows it was sound)
And our Social Psychology workers found
That he was popular with his mates and liked a drink.
The Press are convinced that he bought a paper every day
And that his reactions to advertisements were normal in every way.
Policies taken out in his name prove that he was fully insured,
And his Health-card shows he was once in a hospital but left it cured.
Both Producers Research and High-Grade Living declare
He was fully sensible to the advantages of the Instalment Plan
And had everything necessary to the Modern Man,
A phonograph, a radio, a car and a frigidaire.
Our researchers into Public Opinion are content
That he held the proper opinions for the time of year;
When there was peace, he was for peace: when there was war, he went.
He was married and added five children to the population,
Which our Eugenist says was the right number for a parent of his
generation.
And our teachers report that he never interfered with their
education.
Was he free? Was he happy? The question is absurd:
Had anything been wrong, we should certainly have heard. 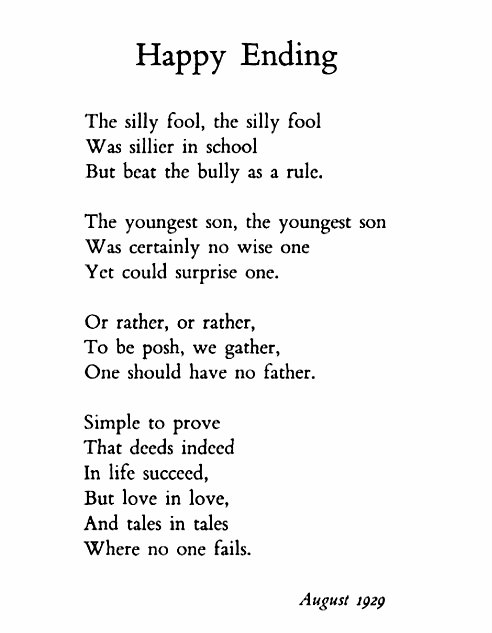 (Via the Library of Congress).

The piers are pummelled by the waves;
In a lonely field the rain
Lashes an abandoned train;
Outlaws fill the mountain caves.

Fantastic grow the evening gowns;
Agents of the Fisc pursue
Absconding tax-defaulters through
The sewers of provincial towns.

Private rites of magic send
The temple prostitutes to sleep;
All the literati keep
An imaginary friend.

Cerebrotonic Cato may
Extol the Ancient Disciplines,
But the muscle-bound Marines
Mutiny for food and pay.

Caesar’s double-bed is warm
As an unimportant clerk
Writes I DO NOT LIKE MY WORK
On a pink official form.

Unendowed with wealth or pity,
Little birds with scarlet legs,
Sitting on their speckled eggs,
Eye each flu-infected city.

“After Reading a Child’s Guide to Modern Physics” by W. H. Auden—

If all a top physicist knows
About the Truth be true,
Then, for all the so-and-so’s,
Futility and grime,
Our common world contains,
We have a better time
Than the Greater Nebulae do,
Or the atoms in our brains.

Marriage is rarely bliss
But, surely it would be worse
As particles to pelt
At thousands of miles per sec
About a universe
Wherein a lover’s kiss
Would either not be felt
Or break the loved one’s neck.

Though the face at which I stare
While shaving it be cruel
For, year after year, it repels
An ageing suitor, it has,
Thank God, sufficient mass
To be altogether there,
Not an indeterminate gruel
Which is partly somewhere else.

Our eyes prefer to suppose
That a habitable place
Has a geocentric view,
That architects enclose
A quiet Euclidian space:
Exploded myths – but who
Could feel at home astraddle
An ever expanding saddle?

This passion of our kind
For the process of finding out
Is a fact one can hardly doubt,
But I would rejoice in it more
If I knew more clearly what
We wanted the knowledge for,
Felt certain still that the mind
Is free to know or not.

It has chosen once, it seems,
And whether our concern
For magnitude’s extremes
Really become a creature
Who comes in a median size,
Or politicizing Nature
Be altogether wise,
Is something we shall learn.

From the Oh, This Exists? Department — W.H. Auden’s 1956 New York Times review of J.R.R. Tolkien’s The Return of the King. It’s a fantastic review that defends Tolkien’s literary authenticity against his many haters, using Erich Auerbach’s groundbreaking work Mimesis as a central arguing point. Here’s Auden’s intro, but again, I recommend reading the whole review—

In “The Return of the King,” Frodo Baggins fulfills his Quest, the realm of Sauron is ended forever, the Third Age is over and J. R. R. Tolkien’s trilogy “The Lord of the Rings” complete. I rarely remember a book about which I have had such violent arguments. Nobody seems to have a moderate opinion: either, like myself, people find it a masterpiece of its genre or they cannot abide it, and among the hostile there are some, I must confess, for whose literary judgment I have great respect. A few of these may have been put off by the first forty pages of the first chapter of the first volume in which the daily life of the hobbits is described; this is light comedy and light comedy is not Mr. Tolkien’s forte. In most cases, however, the objection must go far deeper. I can only suppose that some people object to Heroic Quests and Imaginary Worlds on principle; such, they feel, cannot be anything but light “escapist” reading. That a man like Mr. Tolkien, the English philologist who teaches at Oxford, should lavish such incredible pains upon a genre which is, for them, trifling by definition, is, therefore, very shocking.