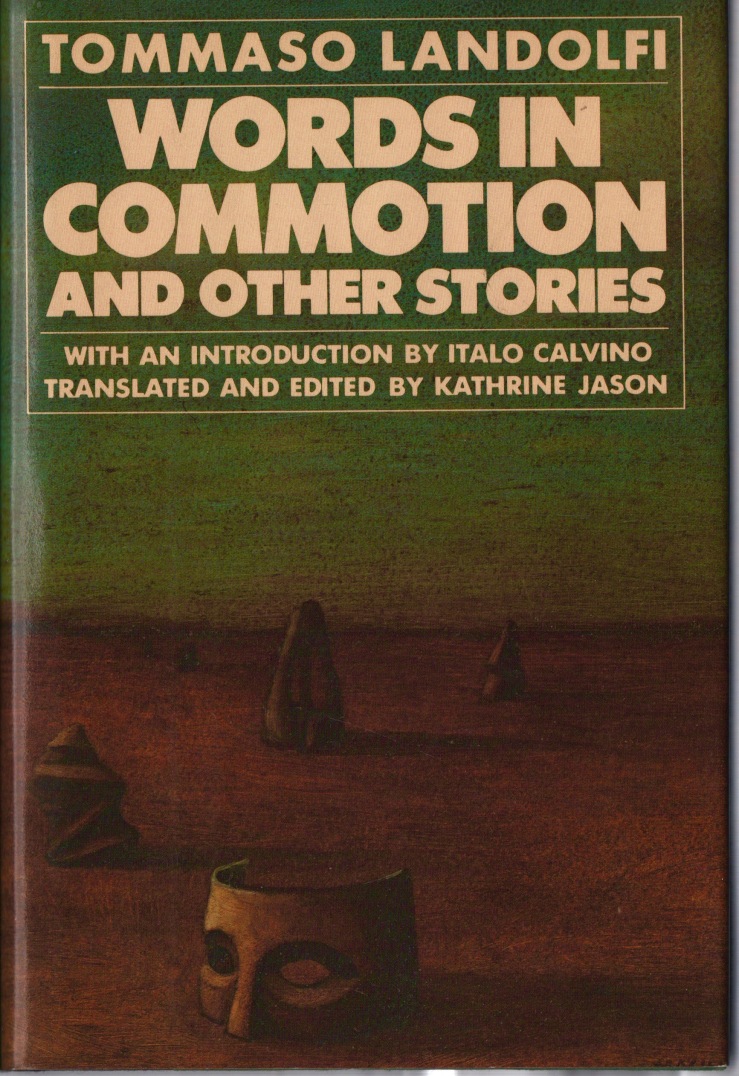 Having a spare hour, I searched my favorite local used book store again for a copy of Thomas S. Klise’s 1974 cult novel The Last Western. I’d like to write about The Last Western more, and I only have a samizdat digital copy (clearly made by someone who deeply loves this out of print novel). It’d be nice to check the digital copy against an actual book of course. Anyway, I didn’t find the Klise, despite extending my search to, um, westerns. (I see interlibrary loan in my future). Really, any indie press that brings The Last Western back into print will find plenty of readers (and champions for the book).

I did find a hardback Viking copy of a Tommaso Landolfi collection Words in Commotion, and read one of the shorter stories, “The Werewolf,” in the shop and then picked it up. Here’s Publisher’s Weekly’s 1986 review:

Little known in this country when he died in 1979, Landolfi is scarcely better recognized today, a situation this collection of 24 stories, with an introduction by Italo Calvino, is intended to remedy. Landolfi did not aspire to amuse or entertain in the usual sense; he preferred to confound and mystify. Even in his relatively conventional stories he scarcely bothered to inquire into motive or seek resolution. In “Uxoricide,” for example, a wife-murderer sets out to kill the shrew for reasons that do not seem quite sufficient, so that the act itself appears brutal and sadistic. In “A Woman’s Breast,” a man lusts after that part of a stranger until he attains it, is thereupon sickened by the sight and discovers odd morbidities within himself. Landolfi’s overriding interests–language and its literary possibilities, metaphysics, literary criticism—necessarily limit his audience. He saw the writer as one who spits words (see the title story), and he set himself against the critics who accused him of being “utterly indecipherable and mysterious.” That is, however, a challenge hurled at the reader. 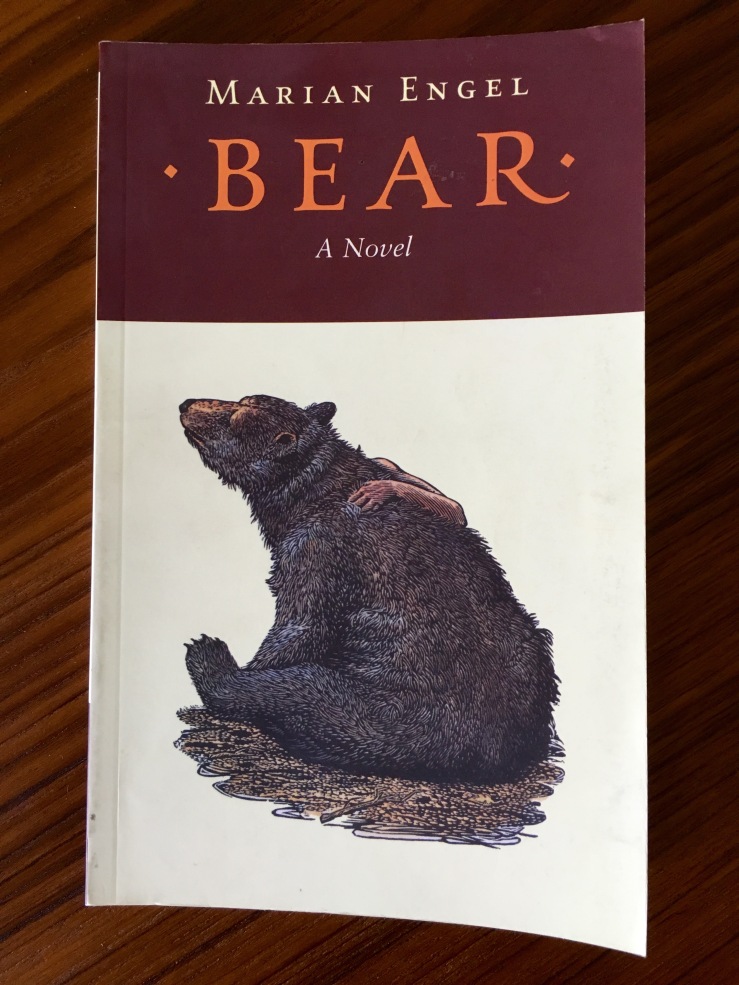 I can’t remember where or how I read about Marian Engel’s 1976 novel Bear, but I was intrigued. In lieu of the blurb, here’s Sara Bynoe at Hazlitt on Bear:

The first thing you need to know about Marian Engel’s 1976 novel Bear is that it is about a woman who has sex with a giant bear. Not a metaphorical, figurative, concept-within-a-creature bear: a real, furry, wild brown bear. There’s more to it than that, but why bury the lead?

The second thing you need to know, however, is that this is not some fringe underground chapbook: it won the Governor General’s award—the highest Canadian honour for the literary arts—in a year in which the jury included Mordecai Richler, Margaret Laurence, and Alice Munro.

We’re talking about Bear right now, though, because someone recently posted its cover and some particularly raunchy sections of the book to Imgur under the title, “WHAT THE ACTUAL FUCK, CANADA?” There was even a little boost in e-book sales after the book’s cover—an illustration of a lithe, topless woman with flowing brunette locks being embraced from behind by a bear standing on its hind legs—went viral. It looks like a Harlequin romance novel: ursine Fabio and his eager human companion, lost together, alone in a world that will never understand the depths of their potentially life-threatening interspecies love.

Hazlitt also commissioned some alternate covers for Bear. I like the cover on the Nonpareil (2003) edition I got (a wood engraving by Wesley W. Bates)—but the original cover is a trashy doozy: 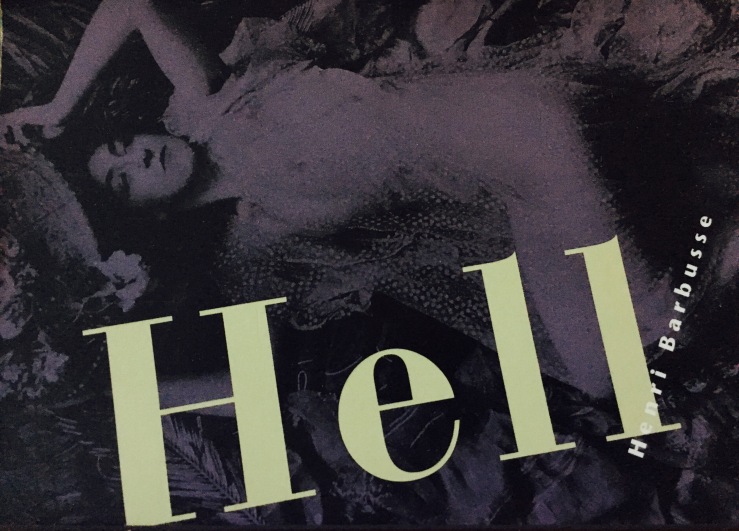 I am bored of Hell, Henri Barbusse’s 1908 novel of voyeurism.

Maybe I should blame the 1966 English translation (from the French) by Robert Baldick, which often feels stuffily stuffy for a book about “childbirth, first love, marriage, adultery, lesbianism, illness, religion and death” (as our dear translator puts it in his brief preface). Maybe I should blame it on Baldick, but that seems rash and wrong, and I have no basis of comparison, do I?

So I blame it on myself, this boredom of Hell.

Why write then? Why not write it off, rather, which is to say, do not write—I don’t know.

I’m bored with Hell and there are half a dozen novels I’ve recently  read (or am reading) that I should commend, recommend, attempt to write about—but here I am bored of Hell, and writing about it. Maybe it’s—and the it here refers to writing about Hell, a book I confesss a boredom of—maybe it’s because I’ve allowed myself over the last few days to good lord skim the goddamned infernal thing, not skimming for a replenishing sustenance, but rather looking for the juicy fat bits, the best bits, in the same way a teenaged version of myself skimmed Henry Miller and Anaïs Nin in a powerful sweat.

(I was a teenage cliché).

Maybe it’s that the best bits of Hell weren’t juicy enough. (In this novel, an unnamed narrator espies all sorts of sensual (and nonsensual) shenanigans through a small hole in his hotel room). Or maybe the juicy bits were juicy, but the translation dried them out. So many of the sentences made me want to close the book. But it’s unfair for me to write this, I suppose, without offering a sample. Here, from early in the novel, is an excerpt that did make me want to keep going:

The mouth is something naked in the naked face. The mouth, which is red with blood, which is forever bleeding, is comparable to the heart: it is a wound, and it is almost a wound to see a woman’s mouth.

And I begin trembling before this woman who is opening a little and bleeding from a smile. The divan yields warmly to the embrace of her broad hips; her finely-made knees are close together, and the whole of the centre of her body is in the shape of a heart.

…Half-lying on the divan, she stretches out her feet towards the fire, lifting her skirt slightly with both hands, and this movement uncovers her black-stockinged legs.

And my flesh cries out…

Those last ellipses were mine. Did you want more? I did, I admit. And yet after 50 pages, I grew bored. The voyeurism was boring—sprawling. Perhaps I’m lazy. Perhaps I want my voyeurism condensed. Maybe…weirder. I don’t know. Reader, I skimmed. I skimmed, like I said, for morsels—but also to the end, the the final chapter, to the final exquisite not boring paragraph, which I’ll share with you now before “I have done,” as the narrator states in this final section. Promised paragraph:

I believe that confronting the human heart and the human mind, which are composed of imperishable longings, there is only the mirage of what they long for. I believe that around us there is only one word on all sides, one immense word which reveals our solitude and extinguishes our radiance: Nothing! I believe that the word does not point to our insignificance or our unhappiness, but on the contrary to our fulfillment and our divinity, since everything is in ourselves.