3. William S. Burroughs, a writer no one reads and everyone references.

5. But, points three and four, it’s the idea of Burroughs, Burroughs-as-luminary, Burroughs-as-symbol, that our culture persists in keeping.

6. Re: Points three, four, five: Burroughs the poser who posed for so many photographs, who couldn’t say no to a spoken word CD or a collaboration or a fucking Nike ad.

7. And always with the guns.

10. If you want to know what licenses Picasso to break the human form (and other forms) into cubes and lines and colors and figured abstractions, go gander at Aunt Pepa or First Communion.

11. If you want to know what licenses Duchamp to call a urinal a work of art, go gander at Portrait of the Artist’s Father.

12. If you want to know what licenses Burroughs to call Naked Lunch a novel, go read Junkie or Queer.

13. Junkie, the first Burroughs novel I read, is a high modernist classic. 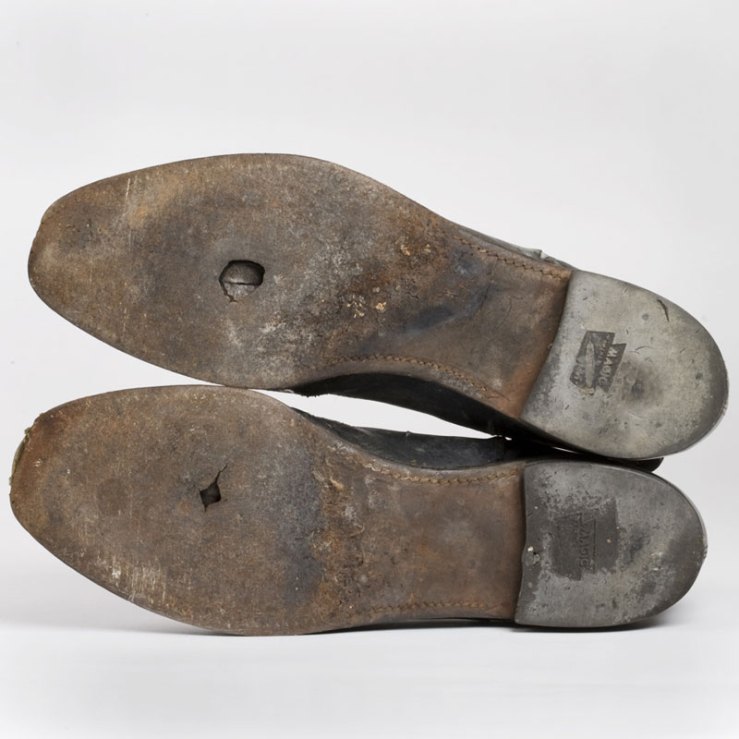 16. The reader is invited, most cordially, to print this riff and cut it into little bits and rearrange it.

17. The reader is invited, most cordially, to cut and paste this riff into a new digital document and rearrange it.

We continue to raid The Paris Review’s interview archive. Here’s J.G. Ballard on William Burroughs, in a 1984 interview–

INTERVIEWER: Burroughs wrote an eccentric and laudatory, in its way, introduction to the American edition of Atrocity Exhibition. Do you know him?

BALLARD: Burroughs, of course, I admire to the other side of idolatry, starting with Naked Lunch, then Ticket, Soft Machine, and Nova Express. I’m less keen on his later books. In his way he’s a genius. It’s a pity that his association with drugs and homosexuality has made him a counterculture figure, but I suppose his real links are with Jack Kerouac, Allen Ginsberg, and the Beats. Still, I think he’s much more of an establishment figure, like Dean Swift, with a despairing disgust for the political and professional establishments of which he is a part. I have met Burroughs quite a few times over the last fifteen years, and he always strikes me as an upper-class Midwesterner, with an inherent superior attitude towards blacks, policemen, doctors, and small-town politicians, the same superior attitude that Swift had to their equivalents in his own day, the same scatological obsessions and brooding contempt for middle-class values, thrift, hard work, parenthood, et cetera, which are just excuses for petit-bourgeois greed and exploitation. But I admire Burroughs more than any other living writer, and most of those who are dead. It’s nothing to do with his homosexual bent, by the way. I’m no member of the “homintern,” but a lifelong straight who prefers the company of women to most men. The few homosexual elements in Crash and Atrocity Exhibition, fucking Reagan, et cetera, are there for reasons other than the sexual—in fact, to show a world beyond sexuality, or, at least beyond clear sexual gender

Do you remember when you were like thirteen or fourteen and you read that bit in Naked Lunch about the supposed mind-expanding properties of nutmeg? Nutmeg! Like your mom baked with! Like, readily-available, no questions asked! And then you took it, just like Burroughs indicated, and it made your stomach hurt and gave you a headache (just like he said it would). And nothing else happened. No visions, no enlightenment, nada. Do you remember that? Oh, wait…that wasn’t you? That was someone else? Sorry…

From “Afterthoughts on a Deposition,” an index to Naked Lunch:

Convicts and sailors sometimes have recourse to nutmeg. About a tablespoon is swallowed with water. Results are vaguely similar to marijuana with side effects of headache and nausea. Death would probably supervene before addiction before addiction if such addiction is possible. I have only taken nutmeg once.

There you go, kids. Knock yourselves out. Actually, don’t. Just rent Altered States instead.

Burroughs, of course, was far more interested in yagé, or ayahuasca, a psychoactive preparation of a South American vine. At the end of his spare, funny, first novel Junky, Burroughs writes:

I decided to go down to Colombia and score for yage. … My wife and I are separated. I am ready to move on south and look for the uncut kick that opens out instead of narrowing down like junk.

Kick is seeing things from a special angle. Kick is momentary freedom from the claims of aging, cautious nagging, frightened flesh. Maybe I will find in yage what I was looking for in junk and weed and coke. Yage may be the final fix.

I’ve read Junky a few times and it seems that these lines are strangely half-hopeful and also deeply ironic. Burroughs’s stand-in, narrator William Lee doesn’t get what the writer William Burroughs seems to realize: there is no permanent solution, no “final fix.” Still, Burroughs sure did have some wacky adventures looking for it. Check out this clip from a documentary, apparently called Ayahuasca, narrated by Burroughs (if anyone out there knows anything about this movie, please let us know): 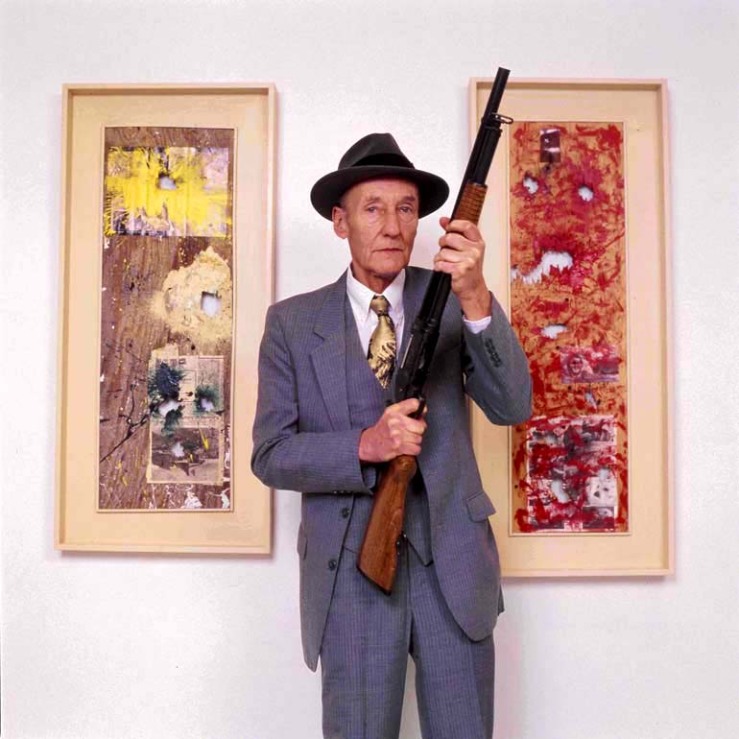 “You were not there for the beginning. You will not be there for the end. Your knowledge of what is going on can only be superficial and relative” — Naked Lunch

Look at these guys! I kind of have to have this record. If you have a copy, go ahead and send it to me. No? Okay, what about uploading the tracks somewhere as mp3s? No? Okay…

Image and LP info via Brainwashed.

1. “103rd Street Boys” from Junkie 2. excerpt from Naked Lunch 3. “From Here To Eternity” from Exterminator 4. excerpt from Ah Pook Is Here 5. “The Chief Smiles” from Wild Boys 6. “The Green Nun” 7. excerpt from Cities Of The Red Night

And so as not to just beg for mp3s but to also give, check out Burroughs explaining how tape manipulation helps to expand conciousness in “Origin and Theory of the Tape,” and get horrified by an example of said technique with “Present Time Exercises,” both from Break Through in Grey Room, a collection of Burroughs’s tape experiments and speeches (not to mention a dash of Ornette Coleman freaking freestyle in Morocco). 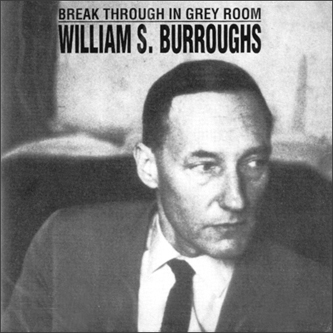 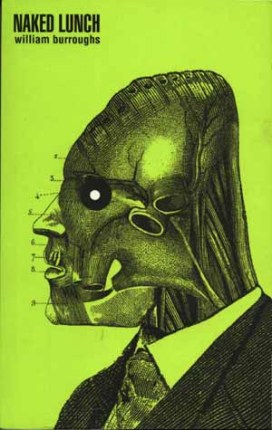 I love Naked Lunch. I love David Cronenberg. Theoretically, I should love David Cronenberg’s film adaptation of William Burrough’s psychosurreal classic. But hey, that’s rational thought for you, right? I didn’t love it in ’93 or ’94, the first time I saw it. Maybe I was too young. Maybe I just didn’t get it (but if that was the case then why did I love the book so much..?) So I watched it again as an undergrad; this was maybe ’99 or ’00. Nope. In fact, I remember thinking “Wow. This is actually pretty bad.” At that point, I was a big Cronenberg fan too. eXistenZ had just come out. eXistenZ is easily my favorite Cronenberg film, and a favorite film in general, and Naked Lunch didn’t hold up well against it or my re-reading of the Burrough’s book. But yet and still, ever the glutton for disappointment, I gave the Naked Lunch movie another shot this weekend, as part of the Biblioklept Summer of Cronenberg Film Festival. Guess what? It’s not a very good movie.

The fault of Cronenberg’s movie is not in failing to adapt the content of Burrough’s book, which is pretty much untranslatable as a narrative movie. Instead, Cronenberg attempts to weld some of the images of Naked Lunch–along with elements of other Burroughs novels such as Nova Express, The Soft Machine, and The Ticket that Exploded–into a cohesive thread using Burroughs’s biography as the overarching frame story. Burroughs’s life story is fascinating–the guy shot his wife in the head, for chrissakes–and lit junkies will love to see characters based on Kerouac and Ginsberg and Paul Bowles–but the end results simply don’t achieve or reflect the spirit of the novel. The bitter, caustic satire of Naked Lunch is almost wholly absent, replaced by wry one-liners from Peter Weller (who woodenly portrays Burroughs’s alter-ego, William Lee (an alter-ego who doesn’t appear in the novel of Naked Lunch at all, incidentally)). Cronenberg seems to underestimate his audience’s capacity for a nonlinear story, taking the loose collection of riffs, routines, and episodes that comprise Naked Lunch, and turning them into a pretty dull meditation on the nature of creativity and the suffering and alienation of the outsider-artist. Worst of all, the audience is asked to identify and sympathize with William Lee–again, this seems to be a negation of the original text.

In the end, Cronenberg’s Naked Lunch is just another bad Cronenberg film (see also: his mish-mashed adaptation of J.G. Ballard’s Crash, his boring adaptation of Stephen King’s The Dead Zone). In Naked Lunch, we get the usual Cronenbergian tropes: mechanical objects that become hideously organic, bodily invasion, constant “is this real or is this a dream?” moments, and general dark creepiness. However, they simply don’t work here: Cronenberg is attempting Burroughs-icky resulting only in Cronenberg-icky. Cronenberg’s entire oeuvre is littered with flawed films, but I tend to enjoy them more for their flaws. This one was a no-go though, and I gave it three shots. But, in a way, I believe that Cronenberg deserved three viewings. You never know. Still, I doubt I’ll watch this one again.

I end with a far better review of Naked Lunch than I’ve provided here, courtesy of The Simpsons. Do you remember that episode where Bart makes a fake driver license (not the one where he’s awarded a real driver license courtesy Mayor Quimby)? And he takes Milhouse and Nelson and Martin on a road trip to the World’s Fair in Knoxville? Well, along the way the boys decide to sneak into an R-rated movie. They leave the theater disappointed; the shot reveals that they’ve just left Naked Lunch. Nelson remarks: “There’s at least two things wrong with that title.” I’ll leave it at that.