—(Quietly) 1 It’s been a prevalent notion 2. Fallen sparks 3. Fragments of vessels broken at the Creation 4. And someday, somehow, before the end, a gathering back to home. A messenger from the Kingdom, arriving at the last moment 5. But I tell you there is no such message, no such home 6—only the millions of last moments… no more. Our history is an aggregate of last moments 7.

1 A stage direction. These are the final lines in a one-act play, a small (cosmically-large) tragicomedy featuring two…nerve cells. Rollo Groast of the White Visitation prefaces a page earlier:

It is part…of an old and clandestine drama for which the human body serves only as a set of very allusive, often cryptic, programme notes—it’s as if the body we can measure is a scrap of this programme found outside in the street, near a magnificent stone theater we cannot enter.

In this little play (its rough setting echoes GR’s own martial satire), a younger cell asks a senior cell if she’s ever been to the “Outer Level” and is somewhat shocked when she tells him that “sooner or later everyone out here has to go Epidermal. No exceptions.”

Is this the first episode of Gravity’s Rainbow staged as a play? I think so.

2 The “prevalent notion” the younger cell subscribes to is characterized in the four sentences that follow, and then rejected in the fifth, the sentence that pivots with “But.” A satire of religious hope, perhaps?—the notion of salvation, redemption, an organizing principle to arrive and tidy all the chaos?

4 The notations on broken vessels and sparks seem to allude to the Kabbalah of Isaac Luria (1534-1572). I will not attempt a bad paraphrase of Lurianic Kabbalah here, but a basic big picture—sparks—souls, fragments of a one-soul—looking to be rectified. Pynchon, inking heavy his preterite-and-elect theme.

5 The deus ex machina in the last act, the game-winning Hail Mary pass, the Messiah, smiling and terrible…

Cf. the opening of Gravity’s Rainbow. From the sixth paragraph:

“You didn’t really believe you’d be saved. Come, we all know who we are by now. No one was ever going to take the trouble to save you, old fellow. . . .”

These are the first lines of dialog in the novel. (If they can be called dialog).

7 The “our” here is biological—one cell to another business—but is there more to human history? Are we more than just our cells? Are there sparks for these vessels?

The narrator here seems to superimpose an answer into the senior cell’s line here: History is simply an imposition, a psychological trick, a way to organize chaos via narrative.

Cf.  Pointsman’s lines, which I brought up in some previous annotations:

Will Postwar be nothing but ‘events,’ newly created one moment to the next? No links? Is it the end of history?

Trefoil, an agent (?!) of The White Visitation, has powers:

Lately, as if all tuned in to the same aethereal Xth Programme, new varieties of freak have been showing up at “The White Visitation,” all hours of the day and night, silent, staring, expecting to be taken care of, carrying machines of black metal and glass gingerbread, off on waxy trances, hyperkinetically waiting only the right trigger-question to start blithering 200 words a minute about their special, terrible endowments. An assault. What are we to make of Gavin Trefoil, for whose gift there’s not even a name yet? (Rollo Groast wants to call it autochromatism.) Gavin, the youngest here, only 17, can somehow metabolize at will one of his amino acids, tyrosine. This will produce melanin, which is the brown-black pigment responsible for human skin color. Gavin can also inhibit this metabolizing by—it appears—varying the level of his blood phenylalanine. So he can change his color from most ghastly albino up through a smooth spectrum to very deep, purplish, black. If he concentrates he can keep this up, at any level, for weeks. Usually he is distracted, or forgets, and gradually drifts back to his rest state, a pale freckled redhead’s complexion.

I suppose I could riff all day on the symbolic/historic implications of Trefoil’s powers: His gradations of color disrupt the binary (black-white, off-on, zero-one) that a Pavlovian like Pointsman insists upon (Trefoil’s super(?!)power falls in line with Roger Mexico’s gradations between 0 and 1).

But what really interests me here is Trefoil’s mutant powers and The White Visitation as a sort of potential comic book—I mean what I want to say here is that Pynchon points ahead to the 1975 “reboot” of Uncanny X-Men, and even The New Mutants: Post-global preterite underground weirdos with strange powers. Psychics and witches and protagonists that splinter into nothingness, after going through multiple reboots—(Plechazunga, the Pig-Hero, Rocketman, etc.). (Hell, the Pynchon X-Men team could even have Grigori the Octopus).

The closest X-Men comparison for Gavin Trefoil is probably the shapeshifter baddie X-Men antagonist Mystique, whose powers are obviously more pronounced than Trefoil’s. And there’s also Nightcrawler—maybe my favorite of Chris Claremont’s run on X-Men—or maybe I mean Excalibur. And also blueskinned Beast.

Late in the novel, Our Hero Tyrone Slothrop will help form the superish heroish team the Floundering Four (along with Myrtle Miraculous, zoot-suited Maximillian, and mechanical man Marcel). The Floundering Four will set out to battle the Paternal Peril. (Make of that what you will). 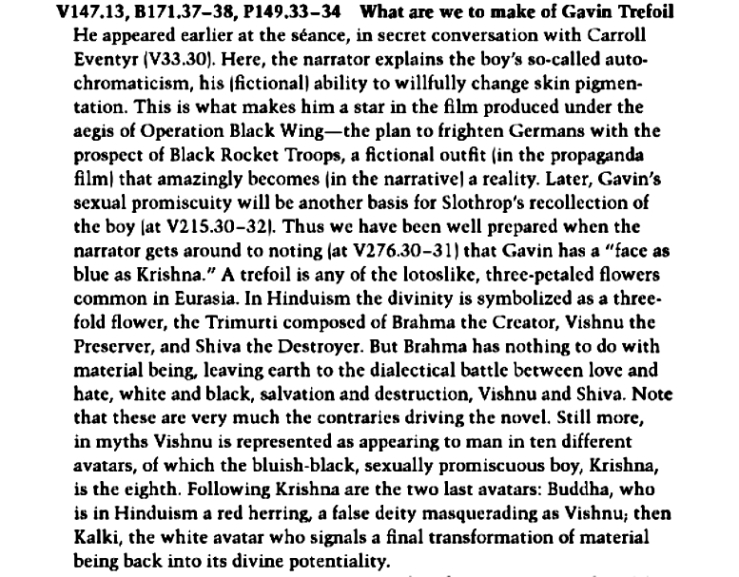 I had fun doing this every Sunday but a year seems like long enough. I do, however, like to do a themed post of some kind on Sundays, so I’ll do something with comics each Sunday for a year. Not just cover scans—panels, strips, etc. But this Sunday, three covers/three books: 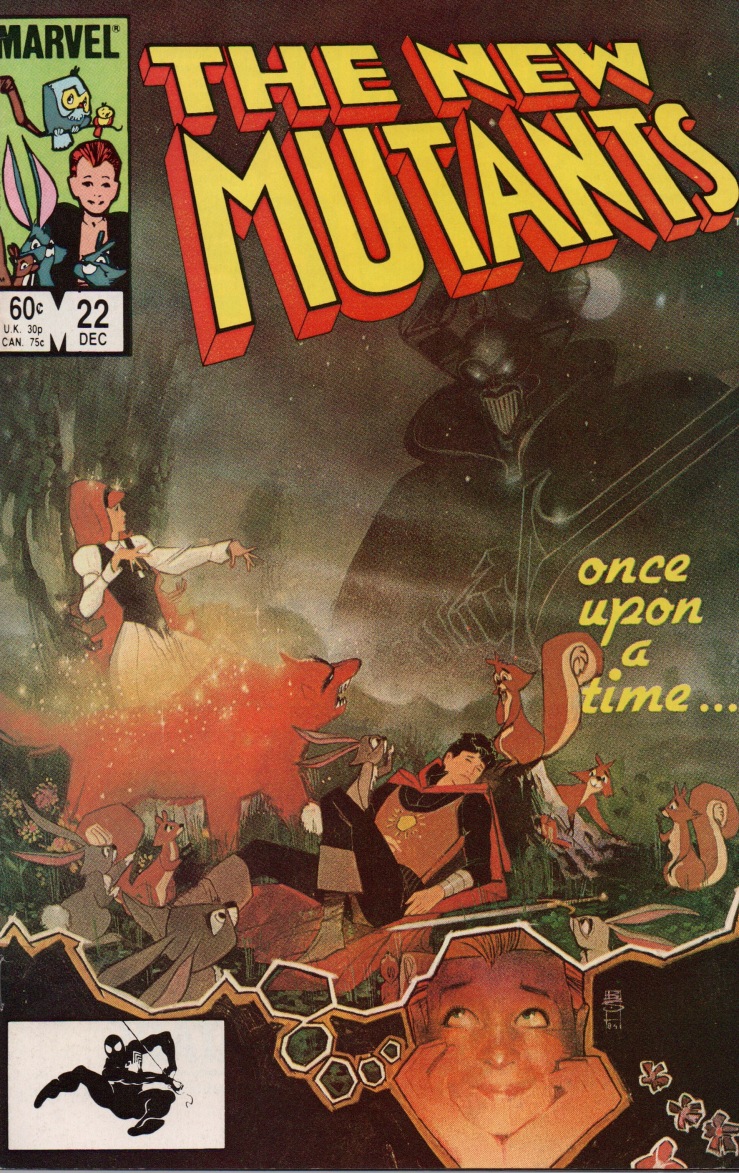 I got rid of most of my Marvel Comics collection when I was 13 but could never bear to part with Sienkiewicz’s run on The New Mutants, my favorite comic book. (I wish I had kept more of Claremont’s 1980s run on The Uncanny X-Men). 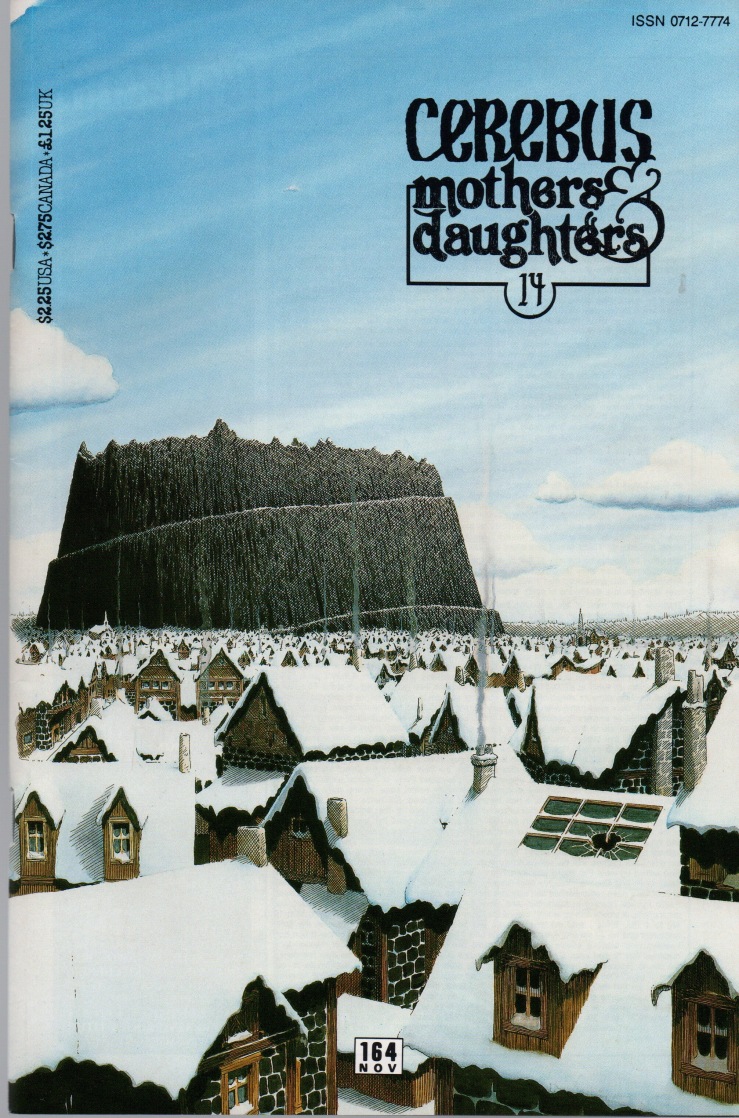 Cerebus #164, November 1992. Aardvark-Vanaheim. Issue (and cover) by Dave Sim and Gerhard. This is the second issue of Cerebus that I bought (issue #163’s cover is not nearly so good, so…not featured today). I had no idea what was going on but loved it. I caught up fairly quickly through Sim’s so-called “phonebooks” of the earlier books. I eventually quit reading Cerebus monthly, but still picked up the big collections, albeit more and more intermittently, until I almost forgot about it altogether. A few years ago I realized that Sim must’ve finished the damn thing (he’d always said it would be 300 issues long and conclude with Cerebus’s death), and I got the final volumes and read them. Let’s just say the first half of Cerebus is much, much better than the second half. 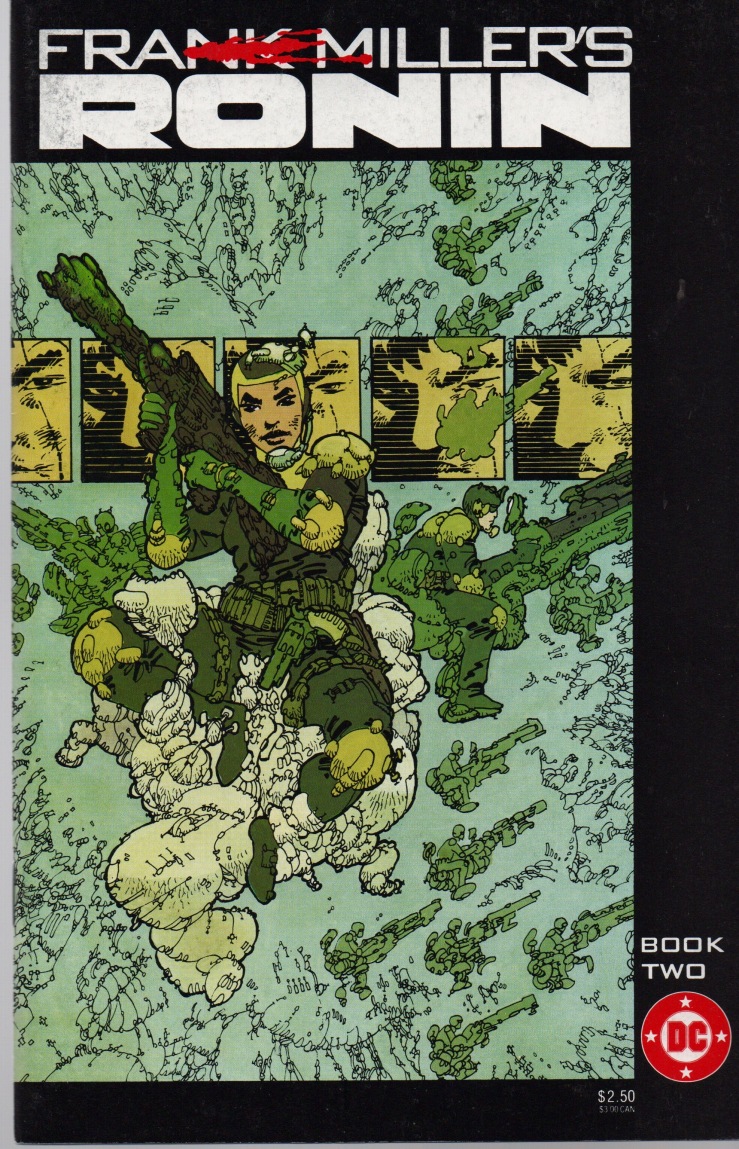 Before Frank Miller became a cranky old fascist hack, he made some pretty good comic books. I’m pretty sure The Dark Knight Returns was the last really good thing he did, and that was thirty years ago, but my favorite Miller will likely always be Ronin. 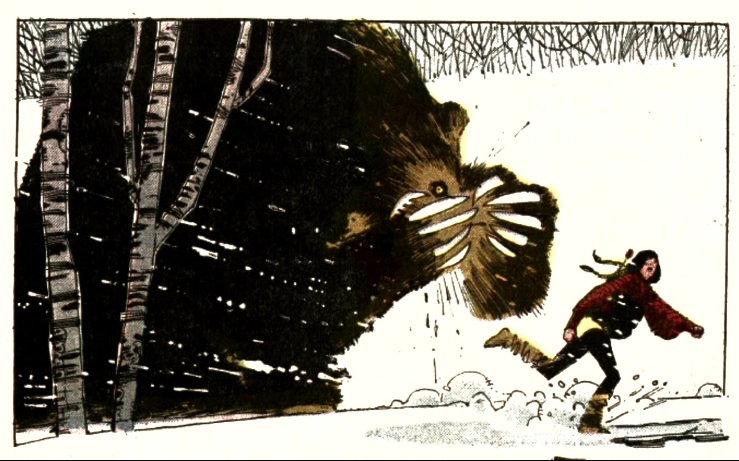 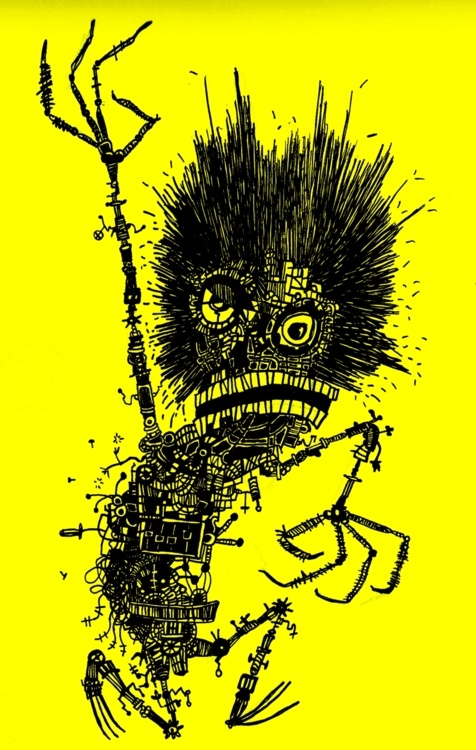 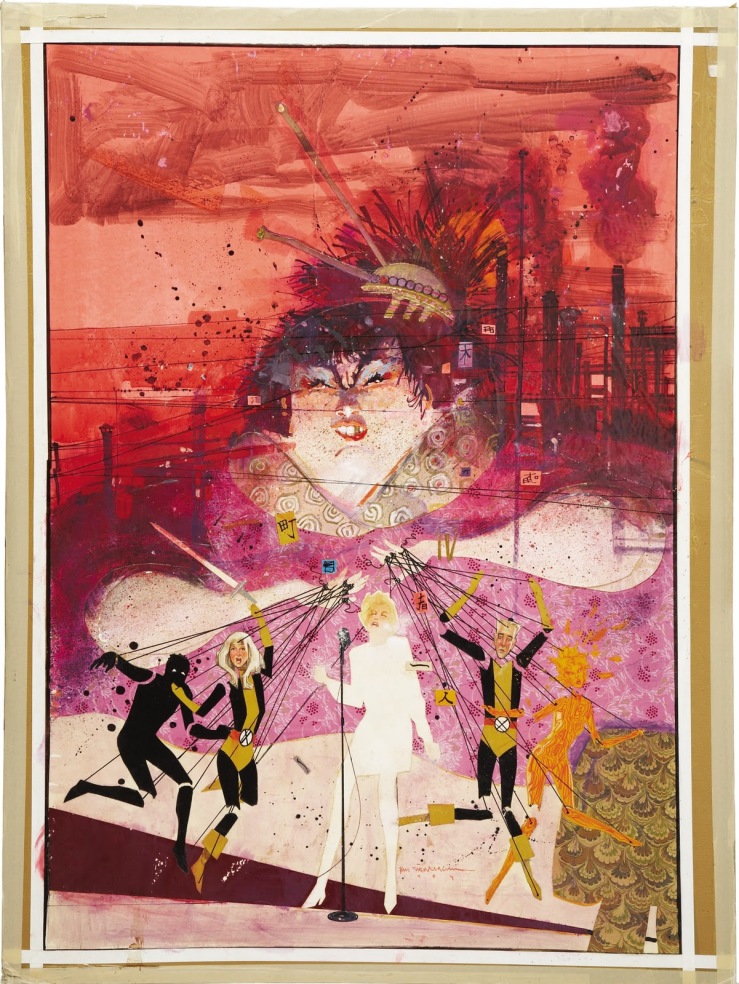 Last month, I kinda sorta reviewed the trailer for Moonrise Kingdom, the new film from Wes Anderson. Moonrise Kingdom has all the hallmarks  of an Anderson joint: an idealistically romantic protagonist who strives to fit the world to his skewed view of it; an overtly hermetic setting (crammed like a Russian nesting doll with even more hermetic settings); a fetish for staginess; a fetish for once useful objects that are now obsolete; the usual cast of characters; etc.

Anyway, one commenter on that post suggested that Anderson adapt V.C. Andrews’s lurid gothic incest romance Flowers in the Attic—and I couldn’t agree more. Andrews’s story grotesquely enshrines the hermetic world of forbidden love that Anderson repeatedly engages in (see the incestuous, or at least Oedipally-displaced romances of The Royal Tennenbaums and Rushmore). The Flowers suggestion (and another comment suggesting a DeLillo adaptation) got me to thinking about other stories I’d love to see Anderson take on.

(Those who hate to see a silly, ridiculous, fanboyish, and entirely hypothetical post should exit anon).

(Oh, and let’s get this one out of the way too: Matt Bucher has already linked Tennenbaums to David Foster Wallace’s Infinite Jest).

While Anderson has authored most of his own scripts (with cowriters like Owen Wilson or Roman Coppola), he showed he could do fine work with people’s stories on Roald Dahl’s The Fantastic Mr. Fox. I’d love to see him do something with Shel Silverstein or Edward Gorey as well, perhaps as a series of animated shorts of some kind. Like Dahl, Silverstein and Gorey deftly explore the dark undercurrent of childhood in a way that’s simultaneously charming and meaningful.

I’d probably be happy with any Wes Anderson superhero movie, but I’d love to see him do a big screen live action version of The New Mutants, a title that ran in the 1980s that focused on teens who were basically X-Men junior. Anderson would be right at home in Charles Xavier’s School for Gifted Youngsters, and the types of missions these teenagers took on were not nearly as intense as the X-Men’s, allowing for a smaller, more emotional film, than, say, Bryan Singer’s bombastic nonsense. Bill Murray for Professor X?

While I’m on big-budget franchise type characters: James Bond. A Bond film would give Anderson plenty of opportunity to play with design and style, as well as humor; Anderson also showed a sense for old-fashioned adventure and action in The Life Aquatic. Owen Wilson as Bond? (As a side note, I should point out that in general I’d love to see the Bond franchise branch out to a series of stylized one-offs, featuring different actors playing Bond, and  helmed by different directors like Spike Lee and Quentin Tarantino).

How about Twain’s The Adventures of Tom Sawyer (not Huck Finn, people)? Maybe as a mini-series on HBO?

Anderson has always been deeply entrenched in J.D. Salinger territory, and although he arguably already did so in Tennenbaums, a film that somehow organizes the lives of the Glass family would be pretty cool.

Harold Brodkey’s overlooked masterpiece First Love and Other Sorrows may be a collection of short stories, but they share a common theme that resonates with Anderson’s aesthetic. Brodkey’s decaying families (which all seem to share a misplaced sense of privilege) would be fertile ground for Anderson (and their midcentury settings would make for some snappy outfits).

Maybe Anderson could highlight some of the humor in Bret Easton Ellis’s Less Than Zero. (Okay, maybe not, but I’d love to see what he’d do with that milieu. And speaking of that milieu—).

I’d love to see the failure that would be Anderson’s take on Fitzgerald’s The Great Gatsby (suggestion: use Jim Henson-style puppets).

And: A Nabokov biopic, preferably one that focuses on his lepidoptery. Could Bill Murray play Nabokov? This question is rhetorical.

Anderson’s films have been repeatedly criticized for their racial insensitivity, but in spite of this (or, perhaps, because of this), I’d like to see his take on Kipling’s The Jungle Book.

Speaking of imperialism: Another Tintin film. And while he’s at it: Lil’ Orphan Annie.

Faulkner’s a bit too gritty, too dirty (not to mention too Southern) for Anderson, but he would probably do a great feature length adaptation of “A Rose for Emily.” Decay, incest, the crumbling of an old value system.

And: It’s about time someone made that Night Court movie, right? Okay, maybe not.