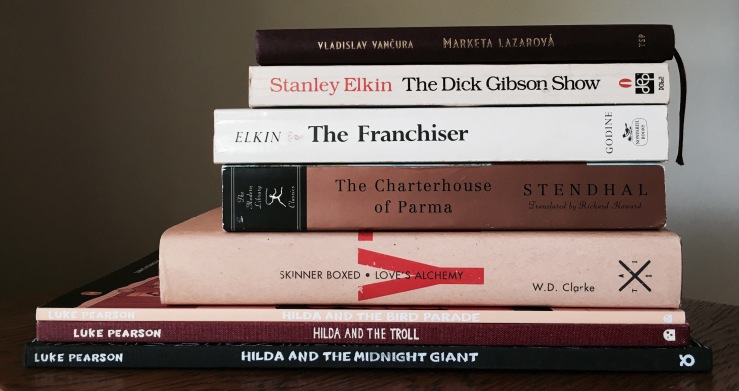 From bottom to top:

I had to go hunt through the house for the trio of Hildafolk comics by Luke Pearson because my kids keep swapping them around. We’ve read them a bunch of times now and they are very good and sweet and charming and you can get them from Nobrow. Hilda is going to be a Netflix series, by the way, which I told my kids and they were psyched. (They ten went on Netflix and looked for it. I had to explain production schedules).

W.D. Clarke’s White Mythology (which may or may not take its title from Derrida’s essay of the same name) is actually two novellas, Skinner Boxed and Love’s Alchemy. I finished the first novella before July 4th; Skinner Boxed is about psychiatrist Dr. Ed, who juggles a bunch of maguffins including a detached (and missing) wife, a returned bastard son, and a clinical anti-depressant trial. The novella begins with epigrams from Gravity’s Rainbow and A Christmas Carol, the latter of which it (somewhat perhaps ironically) follows. I finished the second novella Love’s Alchemy yesterday. Its tone is not as zany as that of Skinner Boxed, but both stories require the reader to put together seemingly disconnected events for the plot to “resolve” (if resolve is the right word). Good stuff.

I started the Howard translation of The Charterhouse of Parma by Stendhal. I’m in Chapter 3 right now. We’ll see how it goes this time. For now, I’ll continue to trust Italo Calvino. From his “Guide for New Readers of Stendhal’s Charterhouse“:

…many young people will be smitten right from the opening pages, and will be instantly convinced that this has to be the best novel ever written, recognising it as the novel they had always wanted to read and which will act as the benchmark for all the other novels they will read in later life. (I’m talking particularly about the opening chapters; as you get into it, you will find that it is a different novel, or several novels each different from the other, all of which will require you to modify your involvement in the plot; whatever happens, the brilliance of the opening will continue to influence you.)

I finished Stanley Elkin’s The Franchiser and then the novel that chronologically preceded it (and arguably birthed it), The Dick Gibson Show. I need to write a whole Thing on these two novels, but I enjoyed them, and can’t believe it took me so long to read Elkin (although I’m glad I read Pynchon, Gaddis, and Gass first). I preferred the riffing polyglossia of TDGS a bit more than The Franchiser, which occasionally seemed to let its satire tip over into a kind of bathetic melancholy. Both novels diagnose an obsession of nostalgia (or, more directly: an obsession of obsession) that continues to grip America.

Yesterday I picked up Vladislav Vančura’s novel Marketa Lazarova, new in a sharp English translation by Carleton Bulkin from Twisted Spoon Press. Twisted Spoon had sent me the book a few weeks ago, and I’d meant to read it over the week of July Fourth but drank too many beers instead. Anyway, I picked it up yesterday and read the first two chapters (50 pages—the first third, that is) gripped in wonder and laughter, and a bit of happy shock even. A strange and often violent tale of multiple kidnappings and medieval intrigues, Marketa Lazarova reminds me of Le Morte D’Arthur, Nanni Balestrini’s Sandokan (both in its evocations of brutality and in its marvelous poetic prose), Aleksei German’s film Hard to Be a God, Bergman’s film The Virgin Spring, Bolaño’s sweetly ironic narrators, and yes, hell, Game of Thrones. I’d rather be reading this book right now than writing about it in this silly blog post, actually. And no, I haven’t seen the František Vláčil film adaptation—yet.

They drove up to the Broadmoor, a pink Monaco castle at the foot of the Rockies, and he showed her the hotel in a proprietary way, taking her through the nifty Regency public rooms with their beautiful sofas, the striped, silken upholstery like tasteful flags. He showed her huge tiaras of chandelier, soft plush carpets. “Yes,” she said, “carpets were our first floors, our first highways.”

“We call the rug in the hall a ‘runner.’ It’s where the runners or messengers waited in the days of kings and emperors.”

“I never made the connection.”

“It’s an insight. Chandeliers must have come in with the development of lens astronomy at the beginning of the seventeenth century. I should think it was an attempt to mimic rather than parody the order of the heavens, to bring the solar system indoors.”

“Well, where, to simple people, would the universe seem to go during the daylight hours, Ben?”

“But chandeliers give light.”

“Not during the daytime. The chandelier is a complex invention—a sculpture of the invisible stars by day, a pragmatic mechanism by night. But a much less daring device finally than carpeting.”

“Because carpeting—think of Oriental rugs—was always primarily ornamental and decorative. It was a deliberate expression of what ground—our first flooring, remember, and incidentally we have to regard tile, too, as a type of carpeting—ought to be in a perfect world. Order, symmetry, design. And since rugs came in before lens telescopy, how could they know? Oh, carpeting’s much more daring. A leap of will.”

“Men will the laws of nature.”

From Stanley Elkin’s 1976 novel The Franchiser.

For twenty years now Berryman’s line I conclude now I have no inner resources has been plinking around the inside of my dumb skull. The line is plinking like crazy lately, as I shuffle final exam essays into some kind of order (what order?) that might align with my ability to offer the student, the writer, some meaningful note, some suggestion for improvement, some revelatory remark. Plink plink plink. No inner resources.

It is bad to start with a complaint so I will dress up the preceding paragraph (I dress it mentally) as an apologia. (Why the hell did I decide to write about books online?!).

I’ve been reading some really great books lately, folks. People, yes, you, listen. It’s not true that I have no inner resources. I am unstuck as a reader. I’m all gummed up with what I’ve read. Well-fed. And yet I go to scribble out a, like, review and plink plink plink. Nothing.

But like I said, the reading’s been really good. From the bottom up:

Let me strongly recommend American Candide by Mahendra Singh. I recommend this book for people who enjoy laughing at tragedies that should otherwise make them weep. You can and should purchase this book from Rosarium.

Above American Candide in the stack so lazily pictured above is Yuri Herrera’s neon noir novella The Transmigration of Bodies, which I also highly recommend. I managed a few words on it here.

If you were to describe Henri Michaux’s Miserable Miracle 1956 book to me, I might politely decline with a small gesture of my hand. It’s about a guy who takes mescaline and writes about the experience and he draws these pictures and then he later takes “Indian hemp” and compares it— you might say to me, you, knowing as you know that I dig weird books, but I would cut you off at with an em dash, polite but firm, Not interested in drug novels these days (and besides dude, you know that Aldous Huxley did kinda the same thing at kinda the same time). And then you, having the book with you might press it into my hand, declaring, No, look—

—and I would say Thanks and consume the book in two sittings.

And so after a few years of false starts, I finally broke through the second chapter of Stanley Elkin’s satire The Franchiser. The many years of recommendations, exhortations (and scoldings) to read The fucking Franchiser were correct and good and now appreciated, as I work my way into the novel’s rich fat middle—but I admit it was Mr. William Gass who finally sold me on a commitment. I read his introduction published elsewhere—in A Temple of Texts—and that was that.

Thanks to Jon for sending me Ursula K. Le Guin’s essay collection The Language of the Night. The collection collects the collective introductions to Le Guin’s so-called Hainish collection, which I read this winter, and wrote about here. Not one of my editions featured the reflections Le Guin (or more likely her editors) called “Introductions” in later essays, and reading the Hainish intros is, in a very slight sense, like rereading those books. Lovely.

Last and never least: Tom Clark’s The Last Gas Station and Other Stories. I’ve thought often of Clark’s poems as stories pretending to be poems so maybe these are poems pretending to be stories. Or maybe I have no idea what the fuck I’m talking about. (Plink plink plink). I read most of them except for the longest one, “Incident at Basecamp,” which I will save save save for the future, an old habit, maybe a bad habit, that, to read all but one story in a collection, to maybe keep the collection afresh somehow or not wholly discovered—eh? Plink plink plink. Wag.

“How crowded is the universe,” his godfather said and moved the plasma arm vaguely. “How stuffed to bursting with its cargo of crap. Consider, Ben. You could have been a pencil or the metal band that holds the eraser to the wood, the wire of lead that runs through it. The black N in ‘Number 2’ stamped along one of its six sides. Or one of its six sides. Or the thin paint on another. You might have been a vowel on a typewriter or a number on a telephone dial or a consonant in books. There are thousands of languages, millions of typewriters, billions of books. You might have been the oxygen I breathe or the air stirred by this sentence. It is a miracle that one is not one of these things, a miracle that one is not a thing at all, that one is animal rather than mineral or vegetable, and a higher animal rather than a lower. You could have been a dot on a die in a child’s Monopoly set. There are twenty-one dots on each die, forty-two in a pair. Good God, Ben, think of all the dice in the world. End to end they’d stretch to the sun. Then there are the rich, the blooded with their red heritage like a thoroughbred’s silks. You might have been a stitch in those silks, a stitch in any of the trillions of vestments, pennants, gloves, blankets, and flags that have existed till now. Let me ask you something. How many people live? Consider the size of their wardrobe over the years. A button you could be, a pocket in pants, a figure on print.

“—I was discussing the rich. There are many wealthy. More than you think. I’m not just talking beneficiaries either, next of kin, in-laws, distant cousins, the King’s mishpocheh, the Emperor’s. But the rich man himself, the wage earner, the founder. Fly in an airplane in a straight line across one state. You couldn’t count the mansions or limousines, you couldn’t count the swimming pools. So many, Ben. You’re not one of them, and not one of the family, and still you exist. I am talking the long shot of existence, the odds no gambler in the world would take, that you would ever come to life as a person, a boy called Ben Flesh.

From Stanley Elkin’s 1975 novel The Franchiser. After a few false starts, I finally got into the rhythm and voices in this strange and very funny novel of Ben Flesh, who “patrolled America” as, well, a franchiser. It was when Ben’s (fairy)godfather goes on a rant about the, uh, miracle of existence that I fell for the novel.