BOMB has published an excerpt from filmmaker Alejandro Jodorowsky’s new memoir Where the Bird Sings Best. An excerpt of the excerpt:

In those good old days, Salvador Arcavi, the first of a long series of Salvadors—traditionally all his descendants had the same name—though respectful of the Holy Book, decided he was not to going to be a prisoner to its letters. Following the prophecy Jacob made to his son (“Your hand will be on the neck of your enemy. Your father’s sons will bow down to you. Judah is a young lion.”), he became a lion tamer. His way to draw nearer to God was to study those beasts and to live an itinerant life, giving performances in which his union with his animals surpassed the limits of reality and reached the miraculous. The lions jumped through flaming hoops, balanced on the tight rope, danced on their hind legs, climbed up on one another to form a pyramid, spelled out the name of a spectator by choosing wooden letters, and, the greatest test, accepted within their jaws without hurting it the head of the tamer, then dragged him through the sawdust to draw a six-pointed star.

My ancestor had a simple method for making the beasts love him: he never forced them to do anything, and he made their training into a game. Whenever they wanted to eat, he fed them, and if they decided not to eat, he did not insist. If they wanted to sleep, he let them, and if they were rutting, he let them fornicate without distraction. He adopted the rhythm of the animals with care and tenderness. He let his hair grow into a mane, he ate raw meat, and he slept naked in the cage embracing his lions. 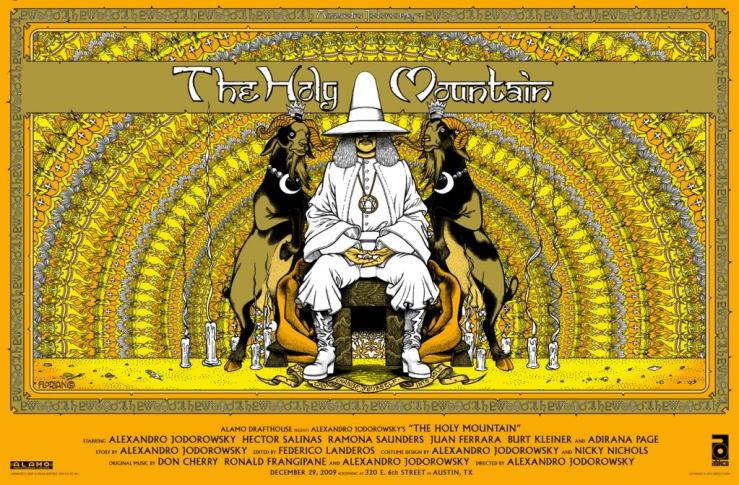 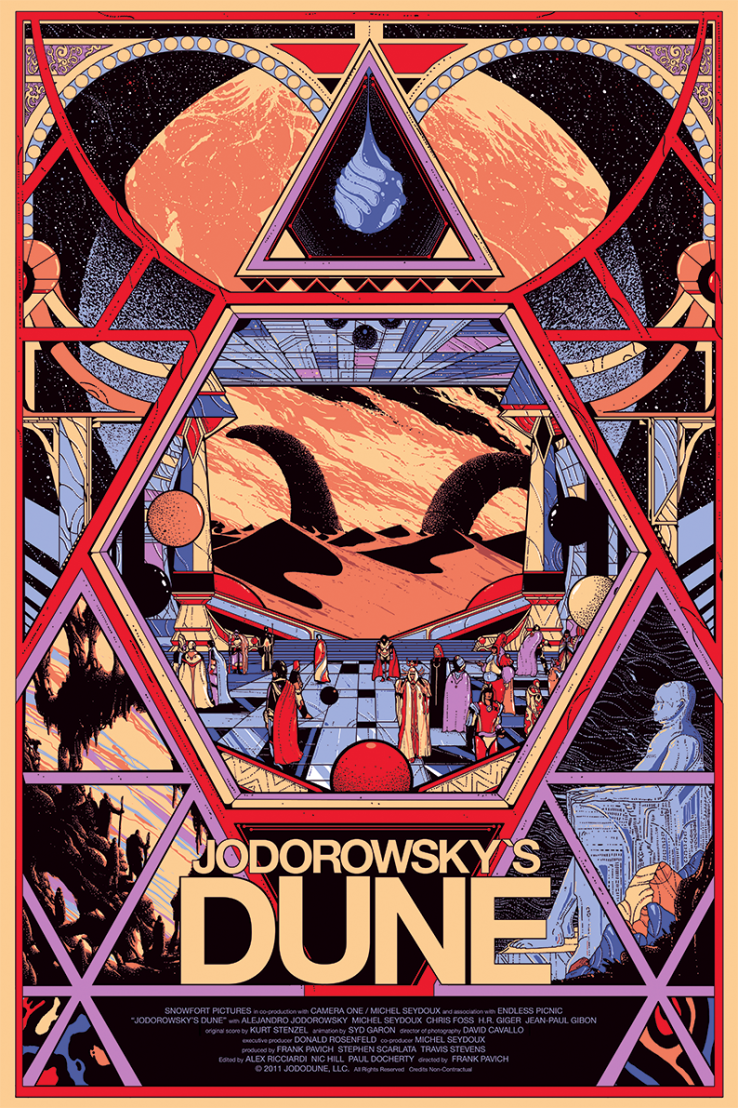 Fans of Alejandro Jodorowsky and will likely already be familiar with the story that unfolds in Jodorowsky’s Dune, a new documentary by Frank Pavich. The short version: After the success of his midnight cult films El Topo and The Holy Mountain, Jodorowsky moves to a castle in France to turn Frank Herbert’s sci-fi novel Dune into a film. Jodorowky put together a group of “spiritual warriors” to aid him in this quest, including the core team of Dan O’Bannon (who went on to create Alien), H.R. Giger, and the French artist Jean Giraud, aka Moebius, whose character designs and storyboards are the concrete manifestations of Jodorowsky’s vision. Jodorowsky also sought out Orson Welles, Salvador Dali, Pink Floyd, and Mick Jagger, among others. The project resulted in a tome the size of several phonebooks, including paintings, designs, technical solutions, and a storyboard by Moebius—but no film. Studios shied away from Jodorowsky, daunted in no small part by the film’s proposed fourteen hour running time. Dino De Laurentiis eventually bought the film rights and handed the project to David Lynch, resulting in 1984’s admirable failure Dune. 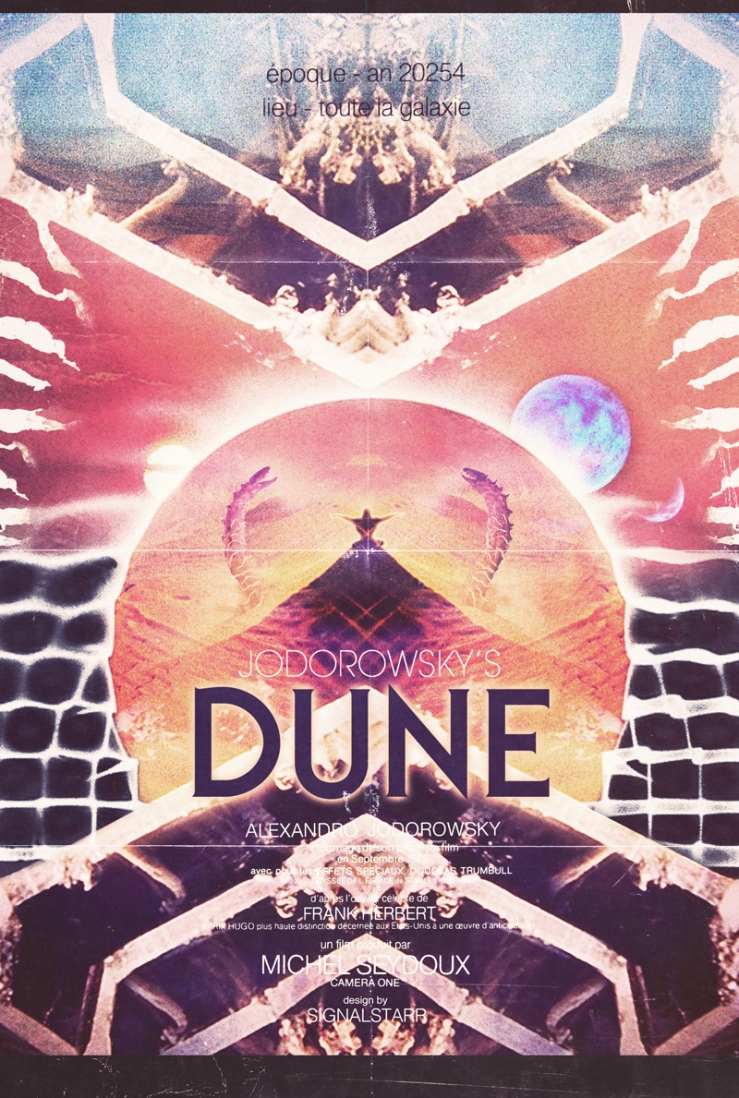 Jodorowsky’s Dune enriches and enhances the mythic status of Jodo (as he’s affectionately called by half the interviewees) and his non-film. Most of this enhancing comes from Jodo himself, whose shaman-presence radiates through the screen, charming the camera and the viewer. Here is someone spinning his own legend, telling stories he’s told a million times before, it seems, but weaving them into a more definitive tapestry—one that covers over half-truths, poses, and outright fraudulence. Like any great con-man, Jodo believes in his own bullshit and makes his audience want to believe it as well. His little stories—promising to buy off Orson Welles with a personal chef and plenty of wine, snapping at Pink Floyd while they wolf down hamburgers, a fateful across-the-room meeting with Mick Jagger, dueling with Dali—these anecdotes are the real life-force of the film. 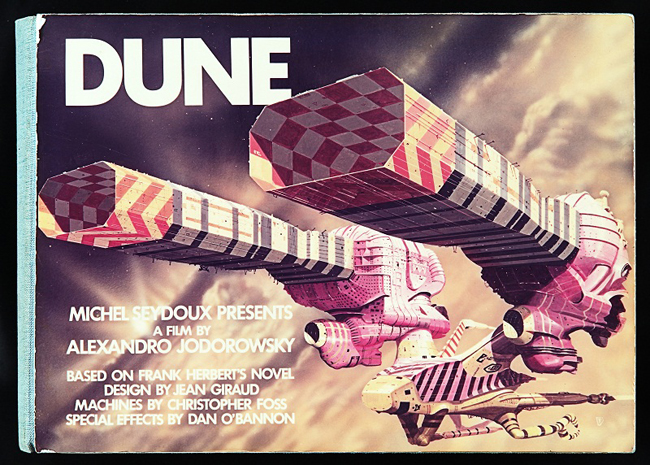 The other talking heads (and occasional disembodied voices) in the documentary offer a more nuanced, reality-based perspective, although it’s always clear that Jodo’s core team of “spiritual warriors” were willing to do whatever he asked of them (including Jodo’s son, who was to play the starring role of Paul Atreides—he had to endure several years of intense martial arts training). Jodorowsky’s influence on H.R. Giger and O’Bannon is especially clear, and the film makes a strong case that many of the concepts that landed in Jodo’s Dune-film-tome eventually showed up all over subsequent sci-fi and fantasy films. 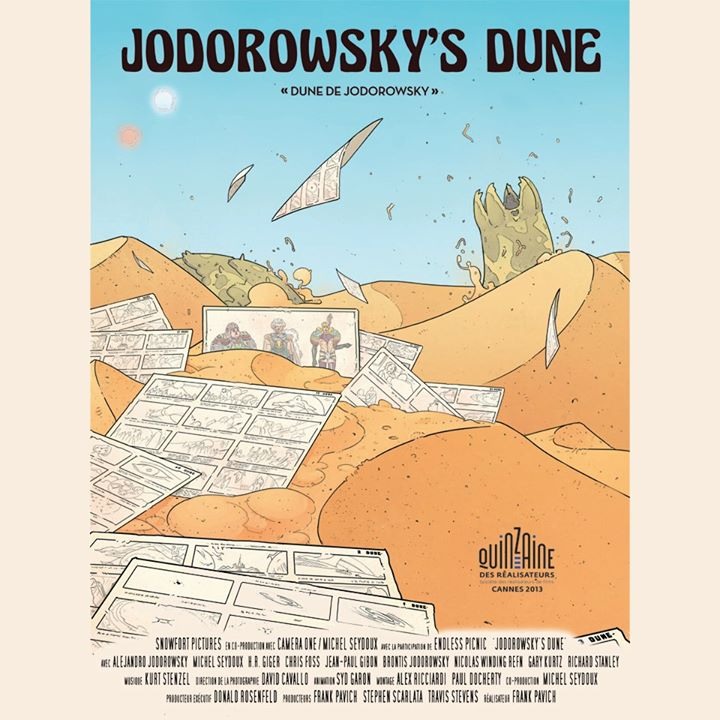 Moebius is sorely missing here. He’s repeatedly (and correctly) credited as a genius, but his overall influence on the project is understated, and unless I blinked and missed it, there is no footage of him in the film—not even a voiceover (conflicting film rights?).

Perhaps what’s most significantly missing from the film is Frank Herbert. Early on, Jodorowsky admits that he hadn’t read Dune, just had the plot summarized by a friend. As the film progresses, it becomes evident that Jodorowsky probably never bothered to read the book. “I was raping Frank Herbert…but with love,” he declares at one point. Of course, it’s Jodorowsky’s Dune—not Herbert’s Dune.

The film also avoids spending much time on Lynch’s Dune, which is probably for the better. Still, there’s a wonderful moment near the end when Jodorowsky shares his thoughts on Lynch’s take (spoiler: He agreed with pretty much every other critic). 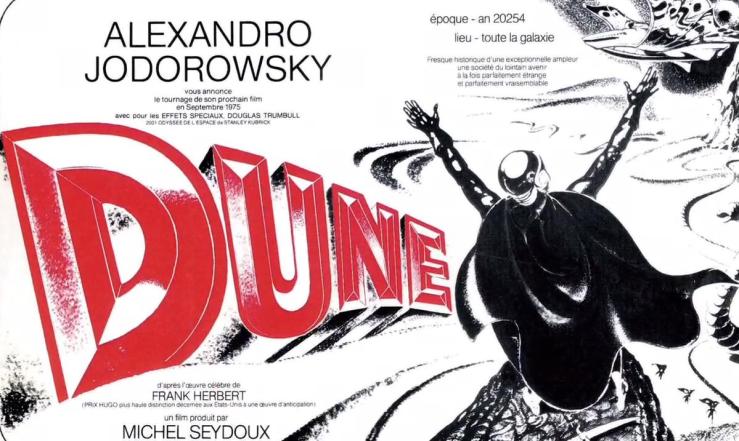 Jodorowsky is clearly still angry that the film was never made. Like a magician practiced in misdirection, he spends much of the film hiding his wounded ego. His performance conveys the appearance—but not the spirit—of candor. In a rare moment that feels honest though, he grasps the tome he made with his spiritual warriors and expresses how much he would like somebody—anybody—to make the film.

Do we actually want Jodorowsky’s Dune? Isn’t it somehow better for the myth to exist, the chimera, the idealization, the-could-have-been? The filmmakers of Jodorowsky’s Dune offer us a version or a template or a guide. They do a wonderful job of synthesizing disparate materials into a unified audiovisual experience. Animation and original music bring the storyboards and concept art into vivid life, and Jodo’s voice commands and directs the viewer’s imagination. And this is the real joy of Jodorowsky’s Dune: A chance for the viewer to imagine, along with its shaman-author, the film that never happened. 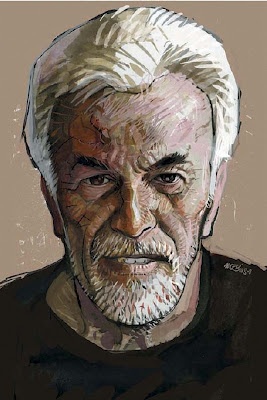 The thing is, I grew up as a foreigner.  Look, my father was a Jew who tried to pass for a Russian.  My mother was half-Russian, because a Cossack raped her mother, and she tried to pass for a Jew.  So, I was Chilean and not Chilean, because I was the son of immigrants.  I was trying to pass for a Chilean, but never completely.  I was never anything.  Therefore, the only exile I know is the exile from myself.  Because I was never myself.  The nostalgia I would have to get back to myself, what am I?  But not what am I as nationality.  What am I as a spirit without limits.  I have limits.  So, each day I try more and more to go toward the anonymous which is precisely the impersonal.  To try to be an impersonal person.  I don’t think in terms of cities now.  I think of the planet.  I don’t think in terms of nationality.  I think of human beings.

From a 1995 interview with Alejandro Jodorowsky by Jason Weiss (who was kind enough to forward a link to me).

AVC: For a long time, you were involved with developing Dune into a feature film, before the project fell through. Did you ever see David Lynch’s Dune?

AJ: Yes, I’ve seen it. I was very scared when I saw it, because Dune was for me very important in my life. I was very sad I could not do it. When I saw that David Lynch would do it, I was very scared, because I admire him as a moviemaker, and I thought he would do well. But when I see the picture, I realize he never understood this picture. It’s not a David Lynch picture. It’s the producer who made that picture, no? Who made this horror. For David Lynch, it was a job. A commercial job. It never was that for me.

Jodorowsky’s version of Dune had entered pre-production, including early art from Jean Giraud (French comics artist Moebius). You can see some of Giraud’s character designs and storyboards here. 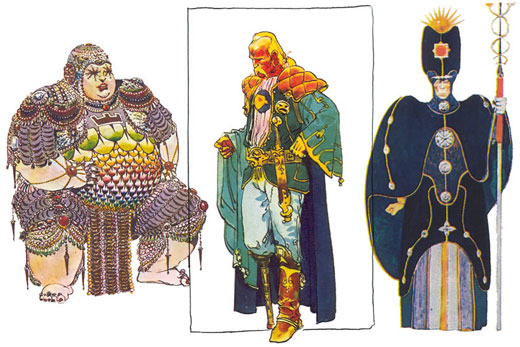 Jodorowsky famously wanted Salvador Dali to play the Emperor and Mick Jagger to play Feyd Rautha (a role that went to Sting in Lynch’s version).