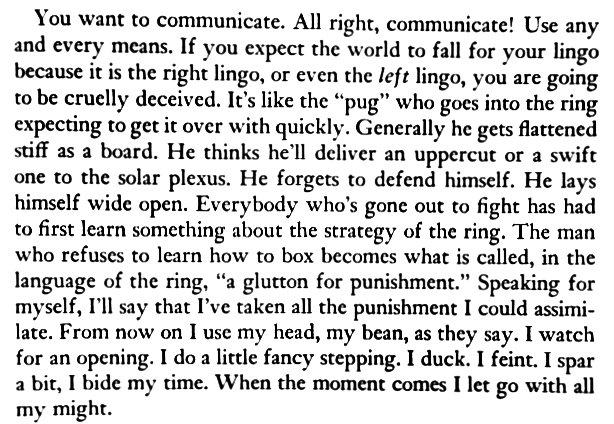 There is nothing more disenchanting to man than to be shown the springs and mechanism of any art.  All our arts and occupations lie wholly on the surface; it is on the surface that we perceive their beauty, fitness, and significance; and to pry below is to be appalled by their emptiness and shocked by the coarseness of the strings and pulleys.  In a similar way, psychology itself, when pushed to any nicety, discovers an abhorrent baldness, but rather from the fault of our analysis than from any poverty native to the mind.  And perhaps in æsthetics the reason is the same: those disclosures which seem fatal to the dignity of art seem so perhaps only in the proportion of our ignorance; and those conscious and unconscious artifices which it seems unworthy of the serious artist to employ were yet, if we had the power to trace them to their springs, indications of a delicacy of the sense finer than we conceive, and hints of ancient harmonies in nature.  This ignorance at least is largely irremediable.  We shall never learn the affinities of beauty, for they lie too deep in nature and too far back in the mysterious history of man.  The amateur, in consequence, will always grudgingly receive details of method, which can be stated but never can wholly be explained; nay, on the principle laid down in Hudibras, that

‘Still the less they understand,
The more they admire the sleight-of-hand,’

many are conscious at each new disclosure of a diminution in the ardour of their pleasure.  I must therefore warn that well-known character, the general reader, that I am here embarked upon a most distasteful business: taking down the picture from the wall and looking on the back; and, like the inquiring child, pulling the musical cart to pieces.

1.  Choice of Words.—The art of literature stands apart from among its sisters, because the material in which the literary artist works is the dialect of life; hence, on the one hand, a strange freshness and immediacy of address to the public mind, which is ready prepared to understand it; but hence, on the other, a singular limitation.  The sister arts enjoy the use of a plastic and ductile material, like the modeller’s clay; literature alone is condemned to work in mosaic with finite and quite rigid words.  You have seen these blocks, dear to the nursery: this one a pillar, that a pediment, a third a window or a vase.  It is with blocks of just such arbitrary size and figure that the literary architect is condemned to design the palace of his art.  Nor is this all; for since these blocks, or words, are the acknowledged currency of our daily affairs, there are here possible none of those suppressions by which other arts obtain relief, continuity, and vigour: no hieroglyphic touch, no smoothed impasto, no inscrutable shadow, as in painting; no blank wall, as in architecture; but every word, phrase, sentence, and paragraph must move in a logical progression, and convey a definite conventional import.

Now the first merit which attracts in the pages of a good writer, or the talk of a brilliant conversationalist, is the apt choice and contrast of the words employed.  It is, indeed, a strange art to take these blocks, rudely conceived for the purpose of the market or the bar, and by tact of application touch them to the finest meanings and distinctions, restore to them their primal energy, wittily shift them to another issue, or make of them a drum to rouse the passions.  But though this form of merit is without doubt the most sensible and seizing, it is far from being equally present in all writers.  The effect of words in Shakespeare, their singular justice, significance, and poetic charm, is different, indeed, from the effect of words in Addison or Fielding.  Or, to take an example nearer home, the words in Carlyle seem electrified into an energy of lineament, like the faces of men furiously moved; whilst the words in Macaulay, apt enough to convey his meaning, harmonious enough in sound, yet glide from the memory like undistinguished elements in a general effect.  But the first class of writers have no monopoly of literary merit.  There is a sense in which Addison is superior to Carlyle; a sense in which Cicero is better than Tacitus, in which Voltaire excels Montaigne: it certainly lies not in the choice of words; it lies not in the interest or value of the matter; it lies not in force of intellect, of poetry, or of humour.  The three first are but infants to the three second; and yet each, in a particular point of literary art, excels his superior in the whole.  What is that point? END_OF_DOCUMENT_TOKEN_TO_BE_REPLACED

In the fall of 2001—only a few months before his too-early death—W.G. Sebald taught a fiction workshop at the University of East Anglia. Two of the students from the workshop, David Lambert and Robert McGill have revisited their notes from that workshop and have compiled Sebald’s writing advice into a fascinating document, posted at Richard Skinner’s blog.

On Reading and Intertextuality

From William H. Gass’s essay “The Concept of Character in Fiction.”