For a few months I’ve been slowly unloading boxes from my grandmother’s old house at my beloved used bookstore, browsing a bit, and coming back with books I don’t need.

Last Friday I found a hardback first edition of Barthelme’s Forty Stories, which is cool (it’s much more handsome and plain than the paperback Penguin Contemporary Fiction edition I have). I’ve been re-reading Barthelme’s Sixty Stories and writing blog posts about them that no one reads for a few weeks now.

A fairy tale run amok, The Taiga Syndrome follows an unnamed Ex-Detective as she searches for a couple who has fled to the far reaches of the earth. A betrayed husband is convinced by a brief telegram that his second ex-wife wants him to track her down—that she wants to be found. He hires the Ex-Detective, who sets out with a translator into a snowy, hostile forest where strange things happen and translation betrays both sense and one’s senses. Tales of Hansel and Gretel and Little Red Riding Hood haunt the Ex-Detective’s quest into a territory overrun with the primitive excesses of Capitalism—accumulation and expulsion, corruption and cruelty—though the lessons of her journey are more experiential than moral: that just as love can fly away, sometimes unloving flies away as well. That sometimes leaving everything behind is the only thing left to do.

I picked up Samuel R. Delany’s novel Babel-17 too, maybe in part of a continued attempt to get into his stuff, despite stall outs, shrugs, and, Hey, that was okays, and maybe just because of this cover: 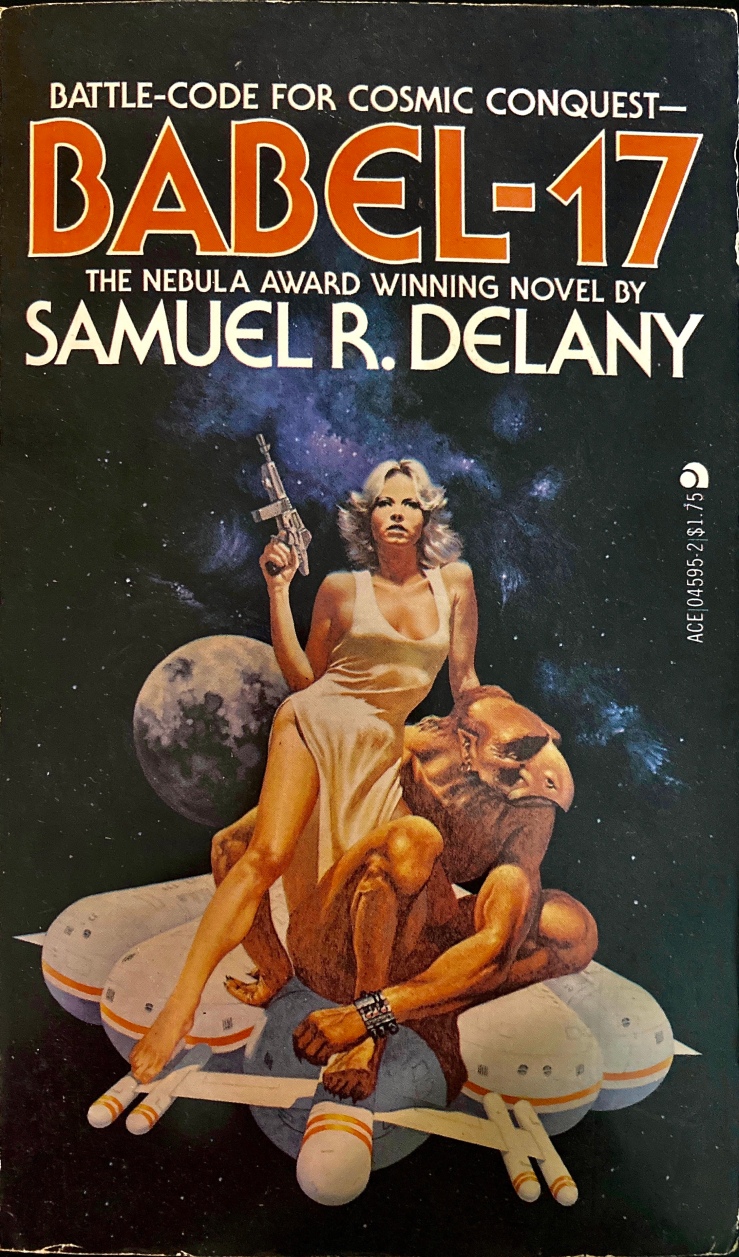 The book’s Wikipedia entry notes that, “Rush drummer and lyricist Neil Peart noted that Babel-17 was one of his early literary influences, and was an important part of the crafting of the band’s hugely successful 2112 album.”

Well there you go.

Purged some shelves and brought a box of old books to my favorite spot earlier this week. I was looking for books by William Melvin Kelley and Clarence Major but no luck. I picked up yet another Muriel Spark title (I am still hungry for this flavor), and also picked up Samuel Delany’s Nova. I failed Delany’s cult novel Dhalgren, but maybe this earlier novel will work for me. Or I will work for it. Or…you know. Also: Got a bunch of art books today from a neighbor leaving the country. Good for her. (That’s my boy Coyote in the upper left.)

As always: I’m sure it was my fault, and not the book’s fault, that I abandoned it.

(Except when it was the book’s fault).

And also: “Abandoned” doesn’t necessarily mean that I won’t come back to some of these books. (One of them even ended up on a list I made earlier this year of the books I’ve started the most times without ever finishing (and I finished one of those books this year, by the way)).

That big guy down on the bottom there, Arno Schmidt’s Bottom’s Dream (Eng. trans. by John Woods)?—I didn’t so much abandon it as I was told to put it away before we served Thanksgiving dinner at our house. There really isn’t a place for me to read the damn thing besides the dining room table. I’m sure I’ll dip into it more and I’m pretty sure I’ll never finish it in this lifetime. But I haven’t abandoned it forever. Earlier this year I wrote about the anxiety Bottom’s Dream produces in me.

Louis Armand’s The Combinations had the misfortune to show up as I was in the middle of a third reading of Gravity’s Rainbow. I read the first two chapters of Armand’s 888 page opus, then some other stuff showed up at the house in the mail, and then The Combinations got pushed to the back of the reading stack. The novel still interests me, but I’m not sure if I have the stamina right now.

Most of my reading experiences have as much to do with the time and the place that I read the book as they do with the form and content of the book. This year was not the time or the place for me to read Elizabeth Hardwick’s Sleepless Nights, a strange book I really, really, really wanted to love, but abandoned maybe 35 pages in.

I actually read a large portion of Peter Biskind’s history of the New Hollywood movement of the 1970s, Easy Riders, Raging Bulls. I broke down and finally bought it this summer after multiple viewings of William Friedkin’s film Sorcerer and two trips through Michael Cimino’s Heaven’s Gate. Biskind’s style is insufferable—gossipy and tawdry—and he swings wildly from venerating the book’s heroes (Bogdanovich, Coppola, Nichols, Scorsese, Malick, De Palma) to tearing them down (um, yeah, they were assholes). But there is an index which is of some use (although in reading Easy Riders, Raging Bulls you’re more likely to find out about a director’s drug problems or sex problems or money problems than you are to find out about, like, filmmaking). The worst part of Biskind’s book though is its repetitive insistence that not only did the Baby Boomers save Hollywood filmmaking, but also that the Boomers’ films were the last real outsider art ever to come out of Hollywood. Yeesh.

The first several stories in James Purdy’s short story collection 63: Dream Palace made me feel very, very sad, so I shelved it.

I read the first 258 pages of Samuel Delany’s novel Dhalgren. The book is 801 pages long and I couldn’t see it improving any. The book might be as great as everyone says it is, but it was mostly a boring mess (pages and pages of a character moving furniture around). On page 258, a character declares “There’s no reason why all art should appeal to all people.” I took that as a sign to ditch.

End with two limes: I’ve tried reading Thomas Bernhard’s The Limeworks too many times. I tried twice this year (once in the summer when it was simply too hot to read Thomas Bernhard). I read Bernhard’s Woodcutters though, and it is amazing.

And: I was reading John Hawkes’s The Lime Twig on Election Day, 2016 and haven’t been able to pick it up since then.

On that page, the visiting poet (Visiting Poet?)—he’s visiting the post-apocalyptic city of Bellona, which is I guess the central character of Dhalgren (I guess?)—on that page, Ernest Newboy (go ahead and groan at that name), declares:

There’s no reason why all art should appeal to all people.

I took that as a sign that I could go ahead and quit Dhalgren.

Delany’s cult novel initially appealed to me, but: No.

I’m trying, right now, to think of a novel I’ve wanted to like more but didn’t like than Dhalgren. (Thomas Disch’s 334, maybe, which Dhalgren resembles? Ballard’s Millenium People, which suggests that somewhere out there there’s a better Delany novel I need to read—like I read the wrong one, the famous one?).

I wanted to like Dhalgren because it’s weird and messy and post-apocalyptic and discursive and shambling and tripping and plotless and vibe vibe vibe…but mostly I found it boring. And the prose was often, uh, bad.

(I just read William Gibson’s foreword to the thing, in which he declares it a “prose-city…a literary singularity…executed by the most remarkable prose stylist to have emerged from the culture of American science fiction.” Nah. (Gibson’s intro has this real awful Baby Boomer you-had-to-be-there-man tone to it too)).

There are bits and pieces of Dhalgren that were interesting enough to make me keep wading through the rubbish: tree sex, hologram gangs, the unnamed apocalypse, the specter of violence, the drugs, the weapons…but to give you an idea of this novel’s rhythm, the central protagonist, Kid, spends a sizable chunk of the novel’s third chapter moving furniture from one apartment to another.

The Kid also wants to be a poet, and Delany spends a lot of time dipping into our boy’s notebook. It’s bad stuff, cringeworthy, and not in an Isn’t-he-a-bad-writer? way. Delany’s own prose veers hippy dippy too—a mirror. (Mirrors and lenses and prisms and recursion images twist through the 250 pages I read. Reality’s an illusion, man. Or not. Or memory. Or something).

I’ve had every kind of warning that Delany’s novel is plotless and will refuse to cohere (Gibson: “Dhalgren does not answer”). I fucking love those kinds of novels. But they have to have something else: Good sentences, one after another. Humor that’s actually, uh, funny. A point of feeling or message beyond the kind of apocalypse vibe I absorbed by reading comics (and comix) when I was 11, 12, 13. Less furniture moving.

Anyway, I’m unconvinced that anything wonderful’s going to pop out in the next 550 or so pages. And I’m fine, at this point, of being wrong, and ready to move on to something else.

I still feel that style is important for reading pleasure, and sex is important for pleasure in life. Each appeases a different type of desire. And while I find nothing shameful in taking direct erotic pleasure from reading or writing, I don’t think they entail a necessary relation. The processes you have me describing are contingent psychological processes. Neither marks one end nor the other of any necessary or even philosophical relationship. Do I still feel the tug between the urge to put something into writing and the urge to fend it off? Less so as I get older. I shall always be able to come up with new fantasies. As long as there are people walking around in the street, as long as I have books to read and windows to look out of, I’m not going to use them up. I assume the universe will go on providing me with many more. The man I’ve lived quite happily with for twenty-two years provides me with much of my sexual satisfaction, physical and psychological. But, no, not all—thank Deus sive Natura, to borrow a phrase from Spinoza. Nor do I provide all his. What an unachievable responsibility!