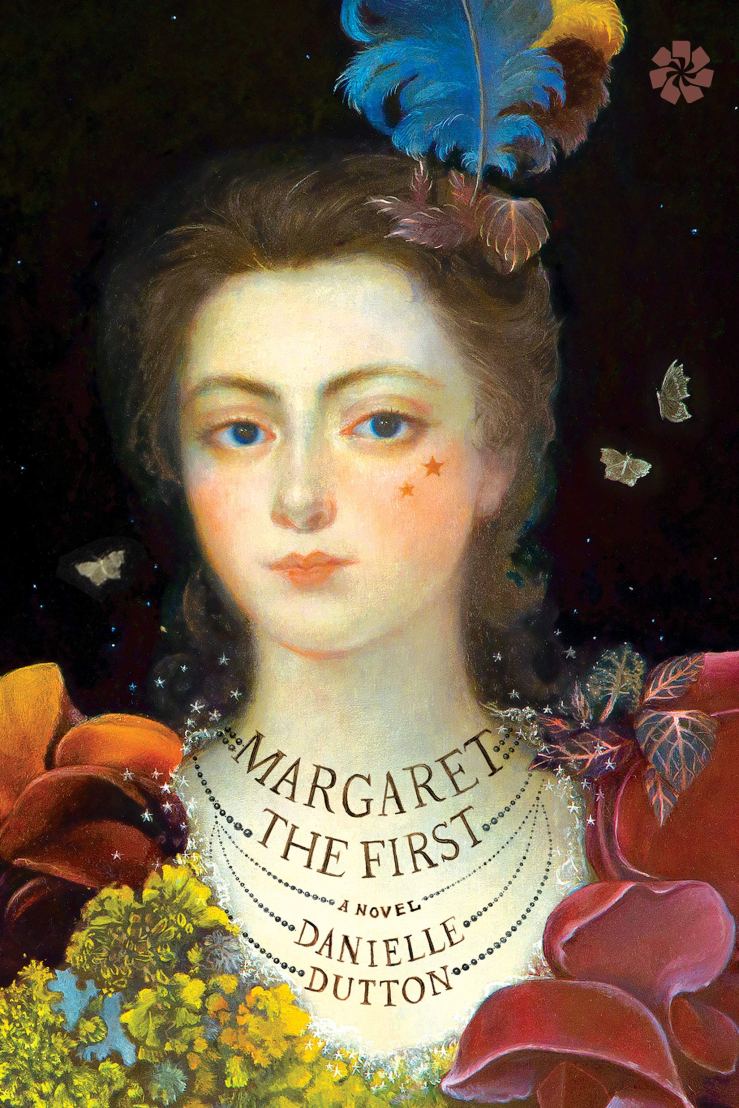 Margaret Lucas Cavendish, Duchess of Newcastle-upon-Tyne was born to a wealthy aristocratic family who took the royalist side in the English Civil War. She spent her teen years attending the exiled Queen Henrietta Maria as a handmaiden. She soon married William Cavendish, the Marquess of Newcastle (and a steadfast royalist), and lived with him in exile in Antwerp. During this time, she began writing and publishing strange volumes on various topics—science, fashion, language, wit, and the act of writing itself. Her eccentric writing mirrored her eccentric habits. Simultaneously shy and fame-hungry, often depressed or elated and manic, Cavendish earned and maintained a notorious reputation over her lifetime.

Danielle Dutton somehow condenses Cavendish’s starbright life into a slim 160 pages in her novel Margaret the First. This imaginative near-biography borrows from Cavendish’s own writings as well as an essay on Cavendish by Virginia Woolf.  Woolf thought Cavendish a cautionary tale. In A Room of One’s Own, Woolf describes her as a brilliant but uneducated woman who “frittered her time away scribbling nonsense and plunging ever deeper into obscurity and folly.” Dutton captures that reputation early in the novel: “Mad Madge,” goes the cry among a crowd of onlookers at the novel’s outset (the crowd includes the diarist Samuel Pepys). However, Dutton is far more sympathetic toward Margaret, conjuring for us a natural composer. Consider these lines from Margaret the First’s opening paragraph:

She made the world her book, took a piece of coal and marked a blank white wall. Later, she made sixteen smaller books: untitled, sewn with yarn. Her girlhood heroes were Shakespeare, Ovid, Caesar. She wrote them in beside thinking-rocks and humming-shoes and her favorite sister, Catherine, who starred in all but five. Snow fell fast as she sat by the nursery fire; ink to paper, then she sewed. The last book told a tale of hasty gloom, teeming with many shades of green: emerald, viridian, a mossy black. In it we meet a miniature princess who lives in a seashell castle and sleeps in sheets woven from the eyelids of doves.

Dutton roped me in with “tale of hasty gloom,” but the images in that last sentence—sheets woven from the eyelids of doves!—propelled my reading on.

We see here Cavendish as a creator of both books and her own world. Dutton’s narrator notes Cavendish—or shall I use Margaret here?—Dutton’s narrator notes that our protagonist not only writes her books, but sews them. The image of creation as fashion—as literally fashioning objects and ideas—repeats throughout Margaret the First. Margaret tells her patient older husband William that “dressing is the poetry of women.” She finds near-epiphanic inspiration in a masquerade costume worn by Christina, Queen of Sweden, who dresses as an Amazon warrior, baring her breasts to the entire court. Later she wonders, “why must grammar be like a prison for the mind? Might not language be as a closet full of gowns? Of a generally similar cut, with a hole for the head and neck to pass, but filled with difference and a variety of trimmings so that we don’t grow bored?”

Critics of Cavendish attacked her spelling and grammar; Woolf declared her “crack-brained and bird-witted.” Dutton’s portrait though gives us something closer to Emily Dickinson or William Blake. Margaret’s an eccentric who turns her eccentricity into a strange new art that resisted grammar that would be “a prison for the mind.”

And yet Dutton is never too-beholden to her subject. We are never told that Margaret is a genius; rather, Dutton attunes us to Margaret’s own singular perceptions—we feel flashes of genius, but also feel Margaret’s frustrated inability to harness that genius into a form that seventeenth-century England can recognize. She is always at the margin of the circle, too eccentric to orbit neatly with the intellectual luminaries whom she encounters.

We also feel the tinges of Margaret’s melancholic mental instability. Alone in a carriage, she retreats into her mind’s eye:

I found myself in an unknown universe, whirling far into space. African servants, dogs in hats, platonic ideals, sparkling conversation, and ivy-coated quadrangles with womanizing captains, dueling earls, actors. I met Father Cyprien de Gamache, her majesty’s wily confessor; William, a poet, who claimed to be Shakespeare’s son; and a giggling dwarf called Jeffry, who’d been presented to the queen in a pie. I met the ladies-in-waiting, too, who hardly looked my way, busy as they were, bickering over who went where and when, who wore what and when, who fetched what and why, who said what and to whom, and who gave her the right to say that.

Tellingly, the cluttered images in Margaret’s fantasy dissolve into the too-banal reality of the grammar of manners: who can wear what, who can say what, and so on. To cop a phrase from Blake, those “mind-forg’d manacles” are hard to break. Indeed, mind-forg’d manacles tend to break those who resist them. “Much Madness is divinest Sense,” Emily Dickinson noted, but also pointed out that those who resist the grammar of manners are “straightway dangerous -/ And handled with a Chain.”

Margaret avoids the chain, and if the world is a bit too much for her to bear at time, she fashions it into Something Else. This is the joy of Margaret the First. Dutton could have crafted the tale as a tragedy, but instead she gives us something else—something rich, generative, imagistic, occasionally unsettling, and ultimately deeply endearing. Highly recommended.