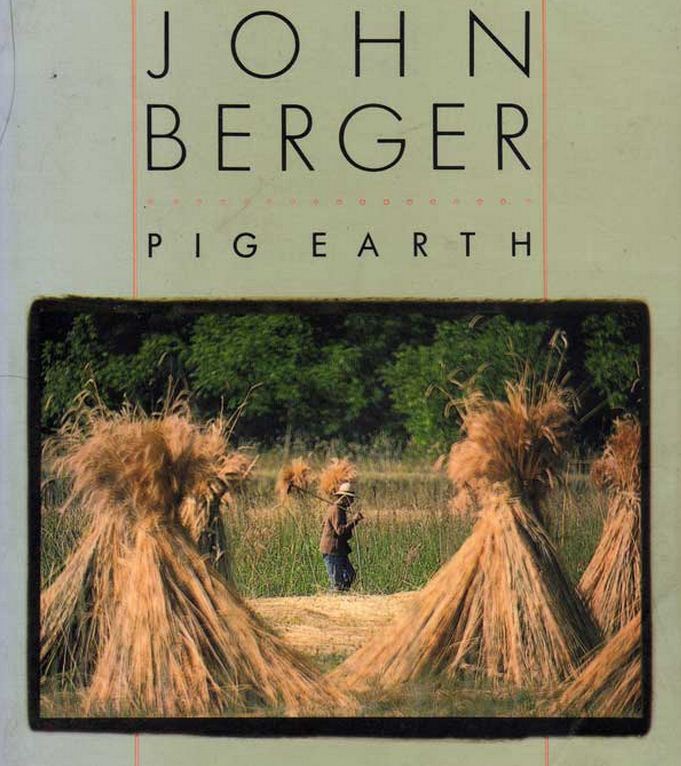 People exaggerate the changes in nature so as to make nature seem lighter. Nature resists change. If something changes, nature waits to see whether the change can continue, and it it can’t, it crushes it with all its weight!  Ten thousand years ago the trout in the stream would have been exactly the same as today.

Stasis and disruption and the relation between people and their natural and urban surroundings are the themes John Berger writes about in his 1979 collection of essays, poems and short stories, Pig Earth.  Having moved from England, where he enjoyed considerable renown as an art critic and fiction writer, to the peasant villages of the French Alps, Berger settled into his role as an active participant in rural life, not only turning hay but observing and documenting the disappearance of a way of a once-pervasive mode of life.  Pig Earth was one result of his labors, the first book of a trilogy that took some fifteen-odd years to complete, a moving but not uncritical account of humanity’s struggle to conquer nature by symbiosis.

Maybe symbiosis isn’t the proper term if we agree that humanity is part of nature’s whole, but Berger juxtaposes the frailty of humanity with the earth’s uncaring and often violent strength.  Survival for the family of the subsistence farmer depends upon that family’s ability to tend to the needs of the plant and animal world (as well as more than a little bit of luck).  In the collection’s first true story, “A Calf Remembered,” a baby cow is delivered on a dark winter’s night. Here, Berger stresses the protections that nature and man have designed to ensure the survival of a young, vulnerable animal:  mucus, barn, salt, and sense.  The human spends his night in the barn protecting his property because it provides him not only with sustenance in the forms of milk and meat, but also companionship and a sense of duty.  When daily living requires acts that might mean life or death, the conscious and the instinct converge.

He sat on a milking stool in the dark.  With his head in his hands, his breathing was indistinguishable from that of the cows. The stable itself was like the inside of an animal.  Breath, water, cud were entering it:  wind, piss, shit were leaving.

Pig Earth is a book worth studying as people attempt to make sense of a world transitioning from one type of living to another and fuss over the sources of their own limited strength and vitality. Berger may not have been looking to pioneer a slow-living locavore lifestyle, but his subjects worry about their increasing isolation from the circles of power and industry.  They fret over the pointlessness of passing their knowledge to their children who need entirely different skills to survive in the rapidly encroaching urban wage economy.  In “The Value of Money” a father refuses a tractor, branded “The Liberator” by the manufacturer, that his son has purchased for him because it will render his faithful work-horse obsolete.  This same farmer kidnaps local tax officials because they want to confiscate the products of his labor without compensation for value that he exclusively created.  Unable to make them understand their wrongdoing, he sets them free because “you can only take revenge on those who are your own.”

The final story, “The Three Lives of Lucy Cabrol,” is the lengthiest and perhaps most poignant narrative in the book. It follows the life of a bright, tenacious, physically stunted woman as she grows from young girl to town outcast.  While Berger admired much of the life in the peasant village, he would fail in his duty as critic and chronicler if he ignored its darker sides. Berger often sets the title character’s pluck against the resignation and superstition endemic to village life. When life requires struggle, most people choose to hoard.  When poor choices may lead to death or family hardship, capitulation to those in power, whether those rulers be the town’s big man or Nazi collaborators, can often seem the only obvious choice.  Lucy shows us that cowardice, no matter the circumstances, only seems easy. Pig Earth is highly recommended.