Blood Meridian is a blood-soaked, bloodthirsty bastard of a book, and certainly the most violent piece of literature I’ve read outside of the Bible and certain Greek tragedies. Cormac McCarthy’s 1985 novel passes itself off as a Western–and it is a Western, to be sure–but more than anything, it’s a brutal horror story.

Set predominantly in the 1850s, Blood Meridian chronicles the westward journey of a protagonist we know only as “the kid.” After a few false starts (including getting shot, robbed, arrested, and surviving a Comanche massacre) the kid eventually meets up with John Joel Glanton‘s “expedition”–a group of men of mixed backgrounds hired by Mexican authorities to kill–and scalp–the nomadic Apache that prey upon Mexican villages. However, led by the nefarious, larger-than-life Judge Holden, Glanton’s gang quickly descends into a relentless robbing, raping, and killing spree; they savagely massacre peaceful Indian settlements along with the Mexican villages they were contracted to protect.

I could keep summarizing the book, but I don’t see the point, honestly–a mere description of the plot could never do real justice to the weight of this book. The narrative is taut and fast-paced–in fact, at points the action is so radically condensed that I had to go back and re-read sections–and there’s no shortage of the “men doing men stuff” that McCarthy is so good at detailing–but it’s really the combination of the book’s evocative imagery and philosophical pondering that hook the reader. 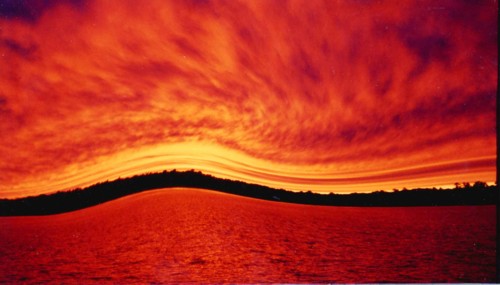 Most of that philosophical pondering comes from the Judge, who waxes heavy on everything from space aliens to metallurgy. In his parables and aphorisms, the Judge comes across as part-Mephistophelean, part-Nietzschean, all dark wisdom and irreverent chaos. I found myself re-reading the Judge’s speeches several times and chewing them over, trying to digest them; for me, they were the best part of a great book.

Blood Meridian, like most excellent things, is simply not for everyone, and I don’t mean that in any snobbish, elitist sense. Any reader turned off by its freewheeling violence would be justified, and I’m sure plenty of folks out there would take issue with its ambiguous conclusion. Depictions of genocidal mania that seem to end inconclusively are not for everyone, particularly when they are rife with archaisms, untranslated Spanish, and McCarthy’s signature, apostrophe-free punctuation. I had two false starts with the novel, including one where, at about exactly half way through, I realized I had to go back and start the novel again. I owed it that much. And it was worth it.

Blood Meridian is literally stunning; perhaps the best analogy I can think of is going to see a really, really good band that plays really, really brutal and strange music that sorta melts your face off. After the show you’re sweaty and exhilarated and even unnerved; your ears are ringing and your chest is pounding. And then the band packs up, and the house lights go on, and they pump in music from a CD, of all things, and the music just sounds tinny and pale and blanched of life after the raw power you’ve witnessed. Reading anything else right after finishing Cormac McCarthy’s Blood Meridian, or the Evening Redness in the West is sort of like that. Highly recommended.