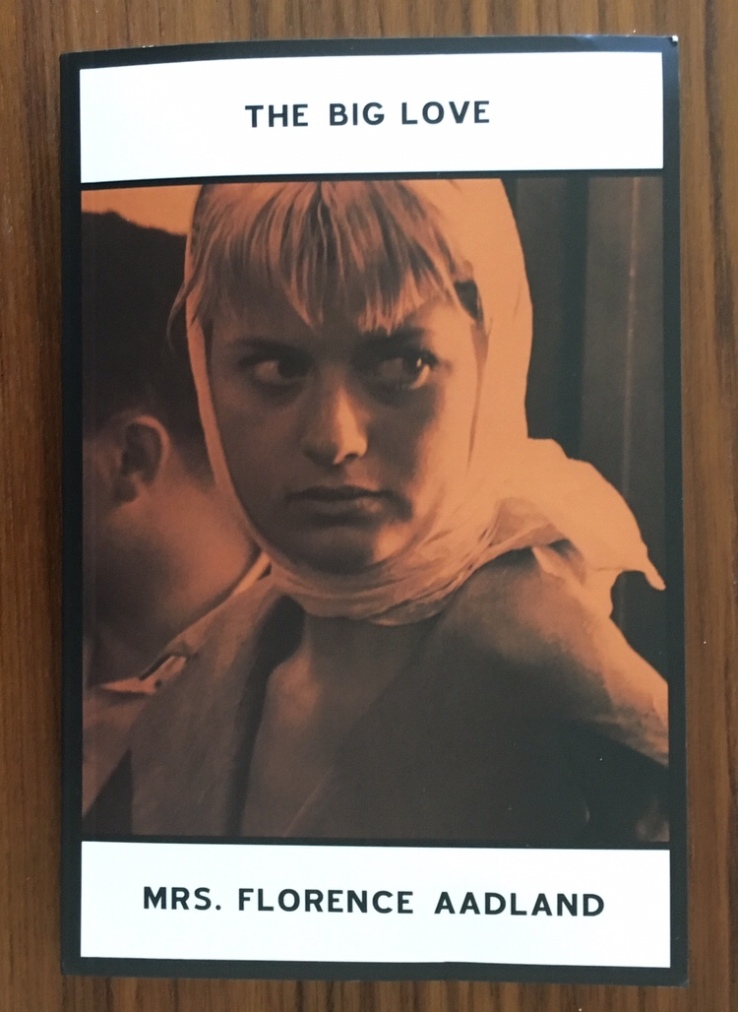 This one looks like a fascinating case of memoir-as-fiction. Florence Aadland’s The Big Love is new from Spurl. Here’s the back cover:

The Big Love is a Hollywood nightmare. It tells the story of Errol Flynn – a fading, alcoholic movie star – and the underage dancer-actress Beverly Aadland. The narrator? Beverly Aadland’s fame-worshiping mother Mrs. Florence Aadland, who spurs the relationship on. There is nothing subtle or sympathetic about this memoir: It is outrageous, grotesque, surreal, notorious – an intimate look at Hollywood exploitation and decay.

On the one hand, The Big Love depicts the deterioration of Errol Flynn, an actor who is quickly losing relevance after years of playing irresistible swashbucklers in films such as Captain Blood (1935) and The Adventures of Robin Hood (1938). He is riddled with medical problems, drinking himself to death. On the other hand, there is Mrs. Florence Aadland, also an alcoholic, an uncultured stage mother psychotically pushing her daughter Beverly forward even at the cost of her own marriage.

A bizarre, seedy time capsule of the 1950s, The Big Love is the long-lost literary sister of Barbara Payton’s I Am Not Ashamed. After languishing out of print for years, it is ready to shock brand new audiences with its absurd humor, villainous characters, and sickly dissipation.

Mrs. Florence Aadland was born on September 21, 1909, in Van Zandt County, Texas. She moved to Southern California and subsequently lost her right foot in a car accident. She married bartender Herbert Aadland and gave birth to her daughter Beverly on September 16, 1942, in Los Angeles. The affair between her adolescent daughter and actor Errol Flynn became tabloid news with his death from a heart attack on October 14, 1959. Her account of the relationship between her daughter and Errol Flynn, The Big Love, was “told to” writer Tedd Thomey and originally published in 1961. Mrs. Aadland died from alcohol-related causes in a Los Angeles hospital on May 10, 1965, at the age of fifty-five.