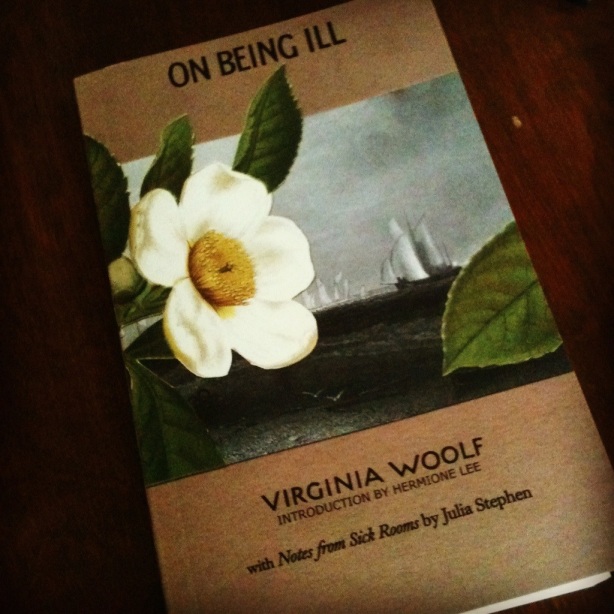 The kind people of Paris Press were good enough to send me a reader copy of their 10th anniversary edition of Virginia Woolf’s essay “On Being Ill,” which they’ve collected with “Notes from Sick Rooms,” an essay by Julia Stephen—Woolf’s mother. Paris Press’s blurb:

Published together for the first time, Woolf and Stephen create a literary conversation between parent and child, patient and care giver, from the vantage points each experience in the world of illness. Originally published by Paris Press in 2002, this new edition doubles the length of the original book and includes a new introduction to Notes from Sick Rooms by eminent Woolf scholar Mark Hussey, and a new afterword by Rita Charon, founder and director of the Narrative Medicine program at Columbia University, along with the original introduction to On Being Ill by Hermione Lee, Woolf’s biographer.

The story of the body’s life, and the part the body has to play in our lives, is one of Virginia Woolf’s great subjects. Far from being an ethereal, chill, disembodied writer, she is always transforming thoughts and feelings and ideas into bodily metaphors. She writes with acute – often extremely troubling – precision about how the body mediates and controls our life stories. Body parts are strewn all over her pages. Rage and embarrassment are felt in the thighs; a headache can turn into a whole autobiography; dressing up the body is an epic ordeal; and a clenched fist, feet in a pair of boots, the flash of a dress or the fingertip feel of a creature in a salt-water pool, can speak volumes.

Nowhere is her attention to body parts more eloquent and intense than in the essay “On Being Ill”. It is one of Woolf’s most daring, strange and original short pieces of writing, and it has more subjects than its title suggests. Like the clouds that its sick watcher, “lying recumbent”, sees changing shapes and ringing curtains up and down, this is a shape-changing essay.

Woolf announces her theme in a long, winding opening sentence that showcases some of the “shape-shifting” Lee alludes to:

Considering how common illness is, how tremendous the spiritual change that it brings, how astonishing, when the lights of health go down, the undiscovered countries that are then disclosed, what wastes and deserts of the soul a slight attack of influenza brings to view, what precipices and lawns sprinkled with bright flowers a little rise of temperature reveals, what ancient and obdurate oaks are uprooted in us by the act of sickness, how we go down in the pit of death and feel the waters of annihilation close above our heads and wake thinking to find ourselves in the presence of the angels and the harpers when we have a tooth out and come to the surface in the dentist’s arm-chair and confuse his “Rinse the mouth-rinse the mouth” with the greeting of the Deity stooping from the floor of Heaven to welcome us – when we think of this, as we are so frequently forced to think of it, it becomes strange indeed that illness has not taken its place with love and battle and jealousy among the prime themes of literature. 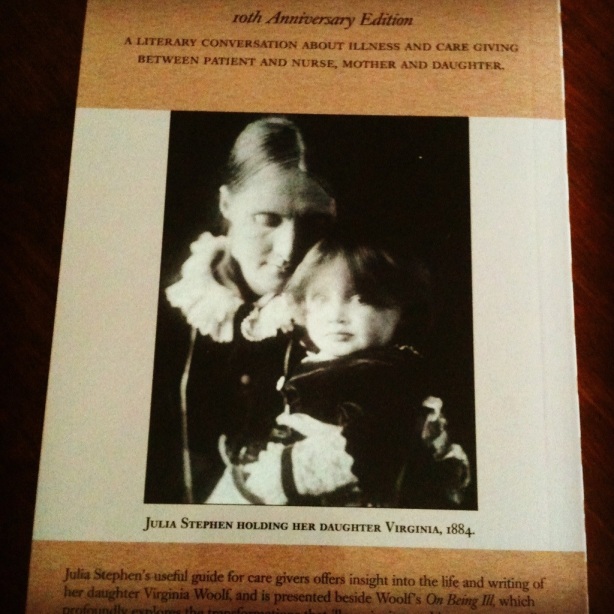 And what of Stephen’s essay? It’s a practical, concrete, and mostly pragmatic approach to caring for sick people. Some parts compel more than others, as when Stephen discusses the absurd flights of fancy that might afflict the ill. In his introduction to “Notes from Sick Rooms,” Mark Hussey tries to amplify connections between the two texts that are either obvious (the texts share a common subject) or speculative (Stephen’s essay “foreshadows the wit and sharp observation that is characteristic of her famous daughter’s style”).  Hussey’s comments are best when they provide basic context and don’t try to force the reader into making connections. There’s also an afterward by Rita Charon, an internist, who again tries to synthesize the two texts. I suppose context is important, but there’s a sense of inflation here that I’m not entirely sure either essay (Woolf’s or Stephen’s) necessarily merits.