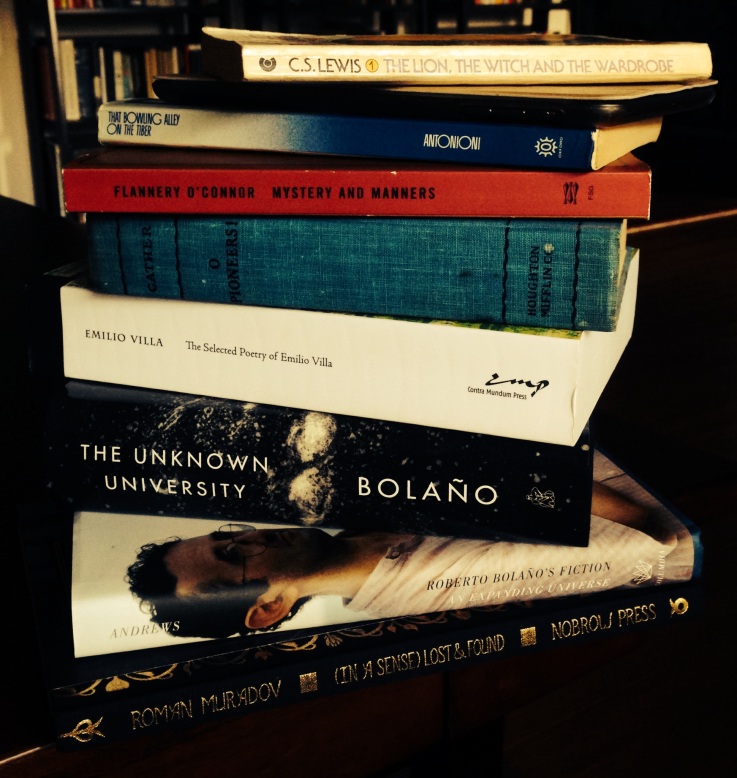 Ran out of time this week before I could write about anything I’ve been reading. So a quick riff, from top to bottom, in the pic above:

The Lion, the Witch, and the Wardrobe, C.S. Lewis

I’ve been reading this at night with my seven-year-old daughter. I’ve read it maybe a thousand times now. Lewis is not the best prose stylist, but he fuses together bits of pagan and Christian myth better than the best.

The Possibility of an Island, Michel Houellebecq

My least-favorite Houellebecq so far—has some wonderful rants at times, but Houellebecq keeps embedding these terrible pop culture references (following his hero Bret Easton Ellis’s lead?) that usually dull the edge he’s been sharpening. And the narrator’s spite at this point is almost unbearable—reading it makes me feel like Gandalfdore drinking that poisonous potion in Harry Potter and the League of Bad Mentors—just sucking down venom.

Great stuff. A little over two-thirds finished. Wrote about is some here.

I might regret that I never wrote a Big Fat Review of Lanark, Gray’s bizarre cult novel. The book is a weird chimera: It starts as a weird sci-fi/fantasy trip—closer to Kafka’s The Castle than genre-conventional fare though, to be clear. Then it shifts into this modernist Künstlerroman that seems to want to be a Scottish answer to Joyce’s Portrait. Then there’s a short story inserted in the middle, a return to the dystopian fantasy (heavy streaks of Logan’s Run and Zardoz and Soylent Green—very ’70s!), and, right before its (purposefully) dissatisfying conclusion, an essay by a version of the author, who defensively critiques his novel for characters and readers alike. Gray wants to have written the Great Scottish Epic. I’m not sure if he did, but Lanark has moments that are better than anything I’ve read all year—even if the end result doesn’t hang together so well.

The Bowling Alley on the Tiber, Michelangelo Antonioni

Sketches and figments that Antonioni never turned into films. Not sure if he intended to.

There’s a tendency in American fiction to posit the American Dream as a masculine escapist fantasy. This version of the Dream is perhaps best expressed in the last lines of The Adventures of Huckleberry Finn, when Huck declares: “But I reckon I got to light out for the territory ahead of the rest, because Aunt Sally she’s going to adopt me and sivilize me, and I can’t stand it. I been there before.” Always more territory, always more space outside of the (maternal) civilizing body. Cather answers to that version of the Dream in her character Alexandra Bergson, who cultivates the land and claims her own agency through commerce and agriculture.

The Selected Poetry of Emilio Villa, translated by Dominic Siracusa

What a strange and wonderful book! I wrote about it here. Confounding.

Okay, so I wrote about the first section in detail here. More or less finished it. Bolaño’s best poems are basically prose (that’s not a knock).

The plot of Muradov’s debut graphic novel floats like a dream-fog in surreal, rich art as the ludic dialogue refuses to direct the reader to a stable referent. Great stuff.