Book shelves series #4, fourth Sunday of 2012: In which we finally leave the master bedroom and check out the books in my children’s rooms.

In the previous weeks, I illustrated that my kids — a girl and a boy, 4 and 1, respectively (tack on a “half” to each of those numbers if you care to) — my kids leave books all over the house. Their books are everywhere. They are as bad as I am. I indicated at the beginning of this year-long series that the documentation would never be stable or absolute; that books float through my house, come and go like bad house guests or silly ghosts—this is probably more true of the children’s books in this house than any other kind of book.

This week, I photograph the book shelves in my kids’ rooms, starting with my daughter’s. This is her big bookshelf: 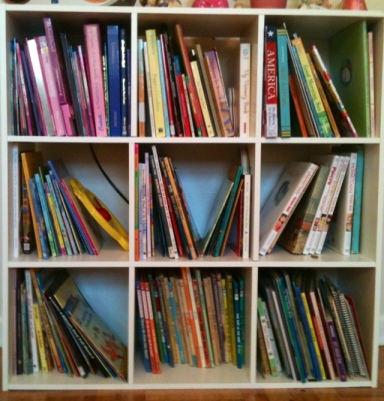 I did not photograph the big pile of books that set to the left. A close up of any of these shelves would reveal a mix of classics—stuff that my wife and I read and cherished as kids—and newer stuff as well. Here’s a shelf, sort of at random—it’s unusually well-organized:

There’s a lot of Studio Ghibli books here; most narrativize Hayao Miyazaki’s films (we’re big fans in this house). My daughter loves these. The bible was my bible; the blue-spined book is this:

You might also note a book version of Jim Henson’s creepy classic The Dark Crystal; this was mine as a kid and it disturbed the hell out of me, so I gave it to my daughter, of course: 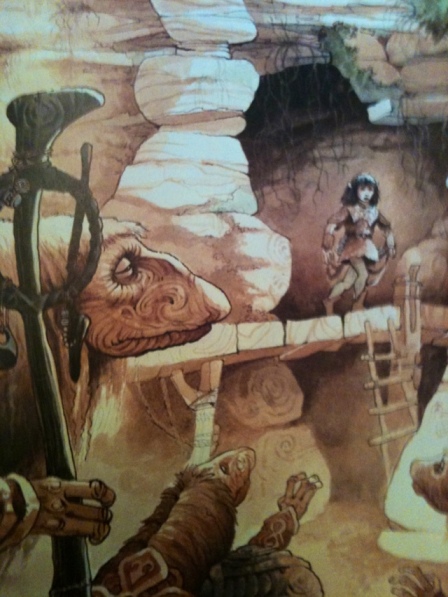 The Studio Ghibli books combine beautiful stills of the film with narrative prose and comic book speech bubbles. From the standpoint of a fan of the films, they’re really interesting because they explicate some of the ambiguity. Our daughter loves them and asks for them (too much!):

Another shelf from another book shelf—the only shelf with books on it in this piece of furniture, actually. Not interesting, but I said I’d photograph all book shelves as part of this project:

Before my wife and I married, we lived in Tokyo for a while; we bought a bunch of these board books at a 100 yen shop. Here’s one:

The book shelf in my son’s room—lots of board books, Eric Carle, stuff like that. He likes trains and dogs: 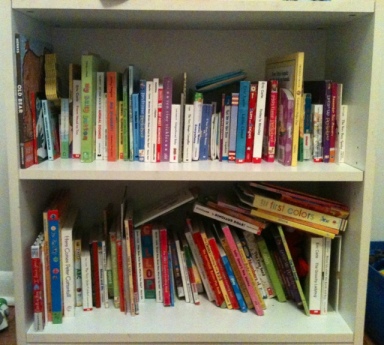 So, I covered both of the kid’s rooms in one post in the hopes of getting to more interesting volumes in the next few weeks. On deck: the den/kitchen space, featuring cookbooks, art books, and travel volumes.