Clarice Lispector’s 1977 novella The Hour of the Star is a superb collection of sentences.

2. But what do I mean by this ridiculous statement? I mean isn’t that what all or most writing amounts to–a “collection of sentences”?

What I mean then is that Lispector’s sentences prickle and tweak and glare, launch off in strange angles from each other as if they were building out narratives in disparate, separate tones, moods, colors.

3. Another way to say this: the writing is strange, marvelous, uncanny. The good weird.

4. Or maybe I should let Lispector’s narrator say it:

Remember that, no matter what I write, my basic material is the word. So this story will consist of words that form phrases from which there emanates a secret meaning that exceeds both words and phrases.

(Our narrator repeatedly invokes the power of “the word,” but I’ll linger on the way those words string together in sentences).

5. And yes, our narrator is a “he.” Clarice Lispector the ventriloquist. Early in the book the narrator says that the tale could only come from “a man for a woman would weep her heart out.”

6. I’ll be frank: I don’t know how to unpack all the ventriloquizing here, the layering between Lispector and her narrator Rodrigo S.M., who relates the sad tale of  Macabéa (a typist!), indigent slum-dweller, no talent and no beauty.

7. Narrator Rodrigo S.M. seems unsure himself how to unpack the tale. He spends almost the first fifth of the book dithering over actually how to begin to start to commence:

I suspect that this lengthy preamble is intended to conceal the poverty of my story, for I am apprehensive.

And a page or two later:

I am scared of starting. I do not even know the girl’s name. It goes without saying that this story drives me to despair because it is too straightforward. What I propose to narrate sounds easy and within everyone’s grasp. But its elaboration is extremely difficult. I must render clear something that is almost obliterated and can scarcely be deciphered. With stiff, contaminated fingers I must touch the invisible in its own squalor.

8. (I promise to pick back up on that squalor and whatever invisible might be at the end of this riff).

9. The Hour of the Star: The story is thin, the plot is a shell, a threadbare ancient trope, as brave Rodrigo S.M. repeatedly tells us.

10. The plot is archetypal even. The orphan girl in the big city. Cinderella who imagines the ball, or tries to imagine the ball. Etc.

11. So here’s a proper plot summary, c/o translator Giovanni Pontiero (who surely deserves large praise heaped at his feet (or a location of his choice) for his poetic translation):

The nucleus of the narrative centres on the misfortunes of Macabéa, a humble girl from a region plagued by drought and poverty, whose future is determined by her inexperience, her ugliness and her total anonymity. Macabéa’s speech and dress betray her origins. An orphaned child from the backwoods of Alagoas, who was brought up by the forbidding aunt in Maceió before making her way to the slums of Acre Street in the heart of Rio de Janeiro’s red-light district. Gauche and rachitic, Macabéa has poverty and ill-health written all over her: a creature conditioned from birth and already singled out as one of the world’s inevitable losers.

Her humdrum existence can be summarized in few words: Macabéa is an appallingly bad typist, she is a virgin, and her favorite drink is Coca-Cola. She is a perfect foil for a bullying employer, a philandering boy friend, and her workmate Glória, who has all the attributes Macabéa sadly lacks.

12. A dozen things that The Hour of the Star may or may not be about: Poverty, storytelling, lies, illusions, abjection, resistance, agency, self, class, power, romance, fate.

13. But let’s get back to those words the narrator is braggin’ on:

Another angle at approaching The Hour of the Star: Its page of thirteen alternate titles, which act as a prose-poem descriptor for the novella: 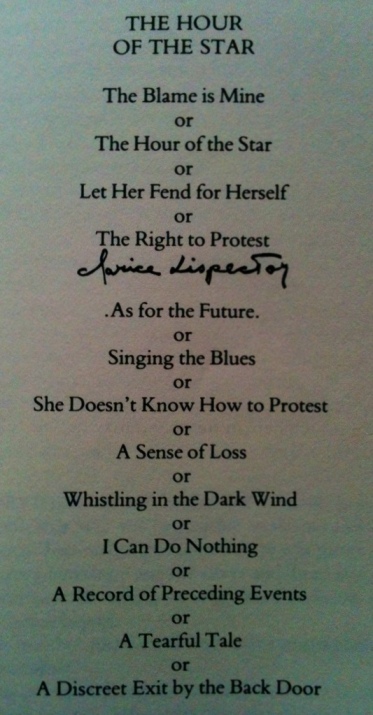 For quite different reasons they had wandered into a butcher’s shop. Macabéa only had to smell raw meat in order to convince herself that she had eaten. What attracted Olímpico, on the other hand, was the sight of a butcher at work with his sharp knife.

15.  Macabéa, our primary, and Olímpico a distant second. But also Rodrigo S.M. (and a few others):

The story—I have decided with an illusion of free will—should have some seven characters, and obviously I am one of the more important.

17. So maybe in one of his (her) parenthetical intrusions (but how can they be intrusions?). From late in the novella:

(But what about me? Here I am telling a story about events that have never happened to me or to anyone known to me. I am amazed at my own perception of the truth. Can it be that it’s my painful task to perceive in the flesh truths that no one wants to face? If I know almost everything about Macabéa, it’s because I once caught a glimpse of this girl with the sallow complexion from the North-east. Her expression revealed everything about her . . .)

18. But I want to say something about how funny this novella, but I don’t know how to say it, or I’m not sure how to illustrate it, how to support such a claim with text—how does one support a feeling, a vibe, a phantom idea? Is The Hour of the Star actually funny? Or am I a sick man? Why did I chuckle so much?

19. I think, re: 18, I think that it must be a mild streak of sadism, or an identification with the narrator’s flawed empathy, his raw presentation of a pathetic, abject heroine, a heroine whose heroism can only manifests in strange eruptions of self-possession, minor triumphs of the barest self-assertions.

At this point, I must record one happy event. One distressing Sunday without mandioca, the girl experienced a strange happiness: at the quayside, she saw a rainbow. She felt something close to ecstasy and tried to retain the vision: if only she could see once more the display of fireworks she had seen as a child in Maceió. She wanted more, for it is true that when one extends a helping hand to the lower orders, they want everything else.; the man on the street dreams greedily of having everything. He has no right to anything but he wants everything. Wouldn’t you agree? There were no means within my power to produce that golden rain achieved with fireworks.

Should I divulge that she adored soldiers? She was mad about them. Whenever she caught sight of a soldier, she would think, trembling with excitement: is he going to murder me?

Can you feel the shifts here? A distressing Sunday, a hungry Sunday (“without mandioca”); its strange happiness; an ecstasy that repeats a childhood vision; the desire for more, to rise above one’s allotment (The Right to Protest, or, She Doesn’t Know How to Protest); the limits of words, of language. An unexpected, seemingly irrelevant anecdote. A rare dip into our heroine’s consciousness.

21. There’s a certain absurdity here, a methodical absurdity, of course. There’s a rhythmic certainty to the prose—a sense of aesthetic uniformity—but the content jars against it, the meaning spikes out in subtly incongruous jags that form some other shape. Folks say folks say Lispector echoes Kafka in this way. (I’m reminded of Robert Walser’s sentences too).

22. But I’ve shared enough to give you a sense of Lispector’s style, a taste anyway, right?

What about the book’s claim, its viewpoint, its thesis?

23. Okay, so it’s right there upfront in the  book’s fifth paragraph, delivered early enough when the reader is suitably perplexed, looking for some kind of narrative inroad, not looking necessarily for a theme or a message or what have you:

Even as I write this I feel ashamed at pouncing on you with a narrative that is so open and explicit. A narrative, however from which blood surging with life might flow only to coagulate into lumps of trembling jelly. Will this story become my own coagulation one day? Who can tell? If there is any truth in it—and clearly the story is true even though invented—let everyone see it reflected in himself for we are all one and the same person . . .

24. Let’s not misunderstand the last sentiment as some hippy-dippy bullshit: Let’s go back to: “I must touch the invisible in its own squalor.”

25. That squalor is the abject, the filth, the not-me, the other, signified most strongly in waste, blood, filth, vomit, the corpse.

26. The gesture of The Hour of the Star is to make visible—in sentences, in words, in language—the invisible in its own squalor.

7 thoughts on “I Riff on Clarice Lispector’s Novella The Hour of the Star, a Strange Work of Pity, Humor, Terror, and Abjection”