Except when it’s not, of course.

I thought I was recording the dreams
I was having; I have realized that it was
not long before I began having dreams
only in order to write them.

These dreams—overdreamed, overworked,
overwritten—what could I then
expect of them, if not to make them into
texts, a bundle of texts left as an o)ering
at the gates of that “royal road” I still
must travel with my eyes open?

3. La Boutique Obscure is new in English translation by Daniel Levin Becker, published by the good people at Melville House.

5. I’ve been slowly reading the essays and riffs and lists collected in Perec’s Species of Spaces and Other Pieces over the past few years. There’s something wonderful about picking the book up at random and finding some little quip or note (or entire essay) that illuminates some fascinating aspect of what we might initially take to be a dull topic.

7. Many of the elements that we see in Dream No. 24 / “Cats” run throughout the collection: Friends, doors, streets, houses, apartments, disasters, performances, lists, etc. etc. Note also Perec’s refusal to analyze or contextualize or otherwise attempt to make meaning out of the dream.

8. My favorite pieces in the collection are the ones that convey more plot—adventures, chases, fragments of films and plays—but there’s also pleasure in Perec’s shortest pieces, which often resemble imagist poems—like “The stone bridge”: 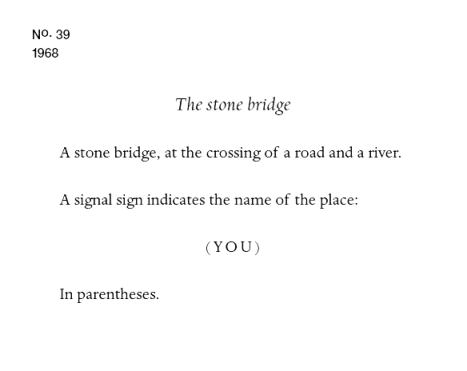 9. A good review, a responsible review, might try to situate Perec’s dream journal against his role as Oulipo gamesmaster, or set the entries against Perec’s biography, or maybe compare it to other dream journals. Or maybe even try to tackle it as a novel, or a novelish book.

10. But I’m more interested in the aesthetic experience of reading La Boutique Obscure. The book is fun, distracting, and divergent. Perec’s refusal to interpret his dreams leaves plenty of space for the reader to make his own connection—and if need be, interpretations—but to be clear, the same banal anxieties that inform our own dreams are what Perec traces the contours of in La Boutique Obscure. The book’s greatest strength is its imagery, its evocation of place, space, movement. To fault it for lacking depth would be to entirely miss the point.

11. Reading La Boutique Obscure provides another nagging reminder that I have yet to read Life A User’s Manual.

12. Finally: Roman Muradov’s response to the book is better than any review: 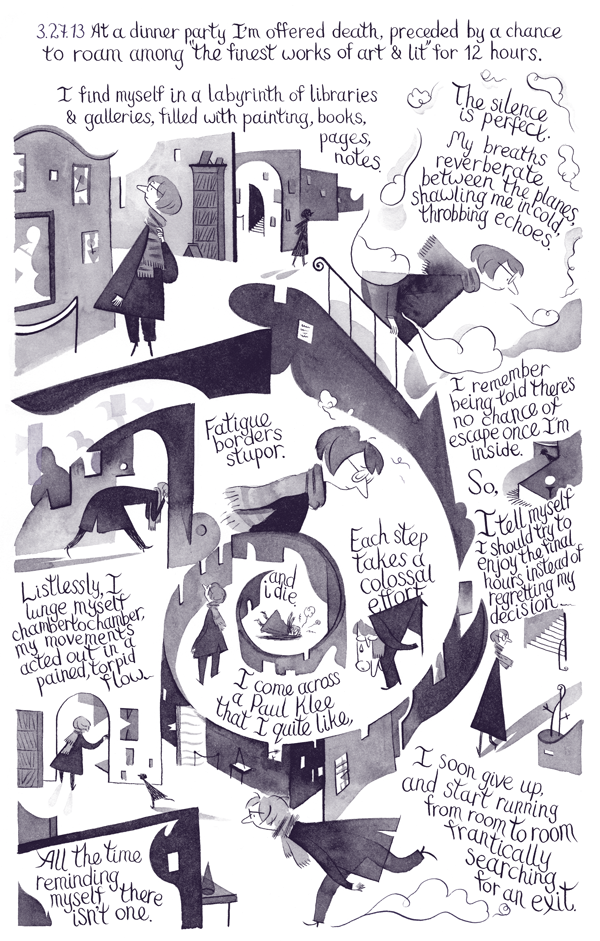 1 thought on “Something on Georges Perec’s La Boutique Obscure”