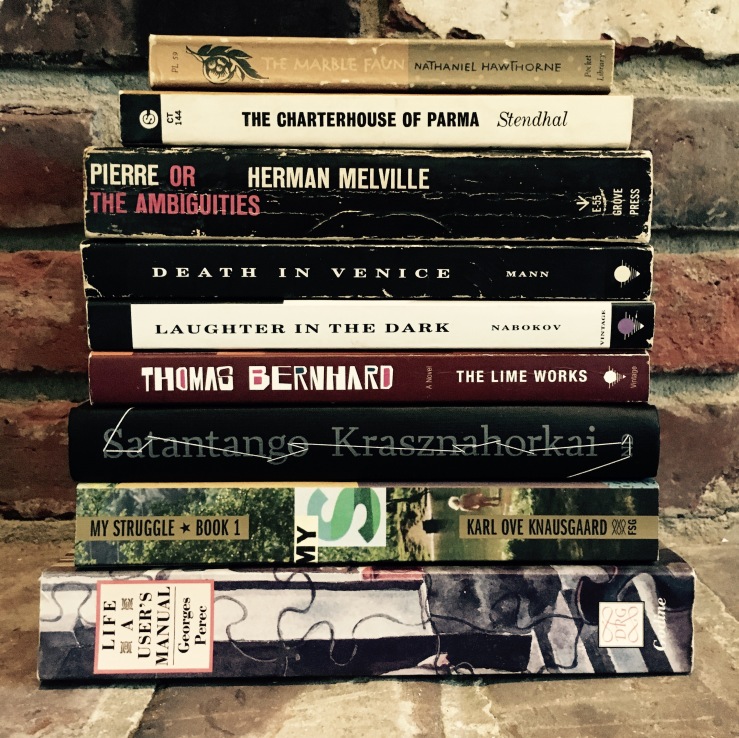 What book have you started the most times without ever finishing?

I asked this question on Twitter a few days ago (and then asked it a few more times, probably annoying some of the nice people who follow me), and I’ll write a bit about some of the responses later this week. I’m hoping too that some of this blog’s readers will share the novel (or novels) they’ve opened the most times without actually ever finishing.

I got to dwelling on the question a bit after talking with two friends, separately, over the past few weeks, both of whom were having a tough time with Gravity’s Rainbow. Up until last year, Gravity’s Rainbow would easily have been my first answer to this question. How many times did I try to read it between 1997 and 2015? Probably like, what, once a year? At least? And while I don’t think Gravity’s Rainbow is the best starting place for Pynchon, the book is endlessly rewarding, and fits nicely into a little mental shelf comprised of books I made plenty of false starts on before finally finishing (Moby-Dick, Ulysses, Infinite Jest…titles that cropped up on Twitter in answer to my silly question).

Gravity’s Rainbow impacted me so much that I immediately reread it. But I don’t think I would’ve gotten there if I hadn’t read more Pynchon first—and honestly, if I didn’t trust certain critics, if I didn’t trust the book’s reputation. But what about all the books I keep cracking open but can’t quite crack into? Am I missing something? I’m probably missing something.

I rounded up most of the novels I could think of that I’ve tried to read at least four times (conspicuously absent is Dostoevsky’s The Idiot, which I’ve tried to read, hell, what four times? Five including an audiobook?)—I’ll riff a little on them. (As an aside: There are certain books I’ll probably never “finish,” that I have no aim of finishing, which I’m not riffing on here—I’ll write about them separately. The include Tristram Shandy, The Anatomy of Melancholy, Don Quixote, and Finnegans Wake).

Nathaniel Hawthorne is one of my favorite writers, yet I can’t get past Ch. 6 of The Marble Faun. His pal Melville’s Moby-Dick is easily one of my favorite books, one that I return to again and again, and yet I can’t seem to get through Pierre without skimming. I “read” the book in grad school, but I didn’t really read it. I’m fairly determined to read both of these, if only to ameliorate my shame as a would-be completist.

Stendhal’s The Charterhouse of Parma is another book I’m determined to finish (at some point, not now! Not today!—is there another translation besides the Moncrieff?!). If the bookmark in the edition above is true, I made it to page 43 on my last attempt (stopping in the middle of a chapter—never a good sign).

By my wholly unscientific calculations, Thomas Mann’s Death in Venice is the book I’ve started and quit the most times. It’s not even a novel. It’s barely a novella. I should be able to finish it. Maybe it’s a stamina issue. Maybe if I could just sit and read it in one go…

I’ll never finish Nabokov’s Laughter in the Dark, but I tried to finish it repeatedly because I, uh, took it from a bookstore without, uh, purchasing it first—the only time I ever did such a thing. When I was a kid. A stupid kid. I confessed (on this blog, years ago—not to the store. The store is gone).

I think I might have read too much Thomas Bernhard too fast, because I keep stalling out on The Lime Works. To be fair, it’s almost impossible for me to read Bernhard in hot or warm weather, and I live in Florida, so the Thomas-Bernhard-reading-weather window is slim. Next winter.

Watching Tarr’s film adaptation of Laszlo Krasznahorkai’s Satantango was difficult enough. (No, I did not do it one sitting). I tried. I tried. I doubt I’ll ever try again.

My Struggle, Book 1. Again, I tried, I tried. Several times. I can’t get down with Knausgaard.

I’m sure I’m forgetting plenty of titles (I’m really great at not finishing novels)—but these are the ones that stand out in recent years.

By way of closing: I’m almost finished with Stanley Elkin’s 1975 novel The Franchiser, which would’ve been on this list just a few months ago.

And again, I’d love to hear what novel (or novels) you’ve started the most times without finishing (yet!).

Except when it’s not, of course.

I thought I was recording the dreams
I was having; I have realized that it was
not long before I began having dreams
only in order to write them.

These dreams—overdreamed, overworked,
overwritten—what could I then
expect of them, if not to make them into
texts, a bundle of texts left as an o)ering
at the gates of that “royal road” I still
must travel with my eyes open?

3. La Boutique Obscure is new in English translation by Daniel Levin Becker, published by the good people at Melville House.

5. I’ve been slowly reading the essays and riffs and lists collected in Perec’s Species of Spaces and Other Pieces over the past few years. There’s something wonderful about picking the book up at random and finding some little quip or note (or entire essay) that illuminates some fascinating aspect of what we might initially take to be a dull topic.

7. Many of the elements that we see in Dream No. 24 / “Cats” run throughout the collection: Friends, doors, streets, houses, apartments, disasters, performances, lists, etc. etc. Note also Perec’s refusal to analyze or contextualize or otherwise attempt to make meaning out of the dream.

8. My favorite pieces in the collection are the ones that convey more plot—adventures, chases, fragments of films and plays—but there’s also pleasure in Perec’s shortest pieces, which often resemble imagist poems—like “The stone bridge”:

9. A good review, a responsible review, might try to situate Perec’s dream journal against his role as Oulipo gamesmaster, or set the entries against Perec’s biography, or maybe compare it to other dream journals. Or maybe even try to tackle it as a novel, or a novelish book.

10. But I’m more interested in the aesthetic experience of reading La Boutique Obscure. The book is fun, distracting, and divergent. Perec’s refusal to interpret his dreams leaves plenty of space for the reader to make his own connection—and if need be, interpretations—but to be clear, the same banal anxieties that inform our own dreams are what Perec traces the contours of in La Boutique Obscure. The book’s greatest strength is its imagery, its evocation of place, space, movement. To fault it for lacking depth would be to entirely miss the point.

11. Reading La Boutique Obscure provides another nagging reminder that I have yet to read Life A User’s Manual.

12. Finally: Roman Muradov’s response to the book is better than any review: 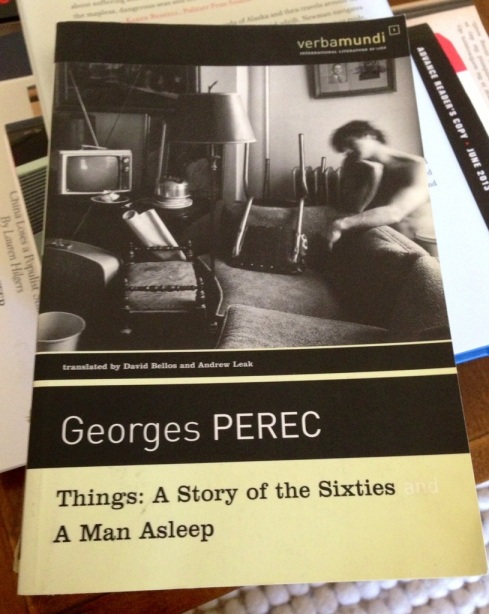 I picked up Georges Perec’s twofer Things and A Man Asleep last Friday at the used bookstore. I was there looking for something else. The Perec was not even shelved under “P.” I found it laid on a table. The good people at Melville House also sent me a copy of Perec’s La Boutique Obscure last week, which I do not photograph here because it is an ebook. I read a big chunk of Obscure this week and will do some kind of write-up sometime soon, but here’s David Auerbach’s review at the LA Review of Books in the meantime.