Once upon a time, young people who were lucky enough to have the leisure to read what they wanted gravitated toward texts like Little Women, The Adventures of Tom Sawyer, and Great Expectations. These books weren’t necessarily written for or marketed to teenagers, but they found (and continue to find) a hungry audience in adolescents. The rise of the modern publishing industry saw a way to feed these voracious young readers, and Young Adult–YA–has since solidified into its own genre, complete with its own set of conventions and tropes, found in fantasies, romances, adventures, and sci-fi novels alike. YA tends to enlarge themes that predominate literature as a whole–alienation, isolation, shame, transformation, and (of course) identity. The best YA literature speaks to adolescent fear, channels it into thought experiments and fantasies that help teens to cope with their changing identities. However, YA, like any genre, puts a writer at risk of being ghettoized, of having her own work thrown in with a good many bad books. In recent years, established writers like Sherman Alexie and Nick Hornby have purposefully written YA books and worked to have their books marketed as such, but perhaps many writers don’t want to be pigeonholed into a genre by having their books directed squarely at teens.

I was thinking about this problem today when I read Michiko Kakutani’s somewhat negative review of Laurence Gonzales’s new novel Lucy in the The New York Times. I received a review copy of Lucy back in March and breezed through it in a few afternoons. It’s an enjoyable read with a preposterous plot that somehow doesn’t come across as a gimmick. The eponymous Lucy, you see, is a genetic experiment, a humanzee born of a bonobo and raised in the middle of the jungle by a (not so) mad scientist named Stone until the age of 14, when insurgents murder her erstwhile dad/creator. Lucy is summarily adopted by another scientist, Jenny Lowe, who takes her to Americaland where she learns to be a normal teen. That is, until her super-chimp powers are revealed to the good American people, who come after her, mob-persecution style. Kakutani insists on reading Gonzales’s work as a Frankenstein story, and picks at it for not explaining its science as well as Michael Crichton’s Jurassic Park. What Kakutani is failing to see is that the novel is not really about scientific hubris–it’s about how hard it is to be a teenager; specifically, it’s about how hard it is to be a teenage girl with a teenage girl body. Kakutani, apparently mistaking books for gravy, also takes Lucy to task for being “lumpy.” If Lucy lacks the finesse, explication, or subtlety that Kakutani would like it to have, then perhaps that is because she misunderstands its audience (to be fair though, Kakutani seems to frequently forget that not all books should be written to her taste).

Again at The New York Times, Tom DeHaven made a similar, if less boorish mistake, earlier this summer in his review of Simon Rich’s début novel Elliot Allagash. Here’s his lede:

If I were in the eighth grade, I’m pretty sure I’d love Simon Rich’s first novel, “Elliot Allagash.” I might even press it on my friends. (“It’s about this 13-year-old evil genius who does whatever he wants because he’s, like, a billionaire. And it’s funny. And short.”) But since more than 45 years have passed since I took up space in a middle school, I simply like it, very much — while wishing this flippant little parable about the puerility of greed had a deeper, sharper bite.

DeHaven wishes Rich’s book had a “deeper, sharper bite” — like Kakutani’s quibble with Gonzales, he wants the kind of acuity that ultimately is not best suited for the eighth and ninth grade boys who will love this book, who will press it on their friends. In my own review of Elliot Allagash, I wrote: “I don’t think that Elliot Allagash is being promoted directly as a Young Adult novel, but it will have a ready audience in the same smart crowd who dig funny, bright novels like C.D. Payne’s Youth in Revolt and Sherman Alexie’s The Absolutely True Diary of a Part-Time Indian .” But even though Elliot Allagash and Lucy aren’t being promoted by their respective publishers Random House and Knopf as YA, that doesn’t mean that they don’t have a potential audience of young adults–and it seems impossible to me that seasoned critics like Kakutani and DeHaven could be ignorant of that. Older readers might enjoy Lucy or Elliot Allagash but young readers might love them; critics shouldn’t condescend authors for not overreaching. A pretentious book is a sin and neither of these books is pretentious. 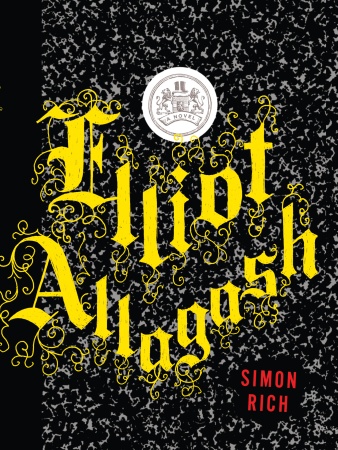 Poor Seymour Herson, protagonist of Simon Rich’s début novel, Elliot Allagash. Overweight, unpopular, and often bullied, he becomes yet another target when Elliot Allagash shows up as a new student in his school. Not that Elliot bullies Seymour. Instead, Elliot targets Seymour as part of a weird Pygmalionesque experiment to manipulate the social hierarchies of Glendale, the middling Manhattan private school the two attend. Why is billionaire Elliot attending such a low-rent school? Simple: He’s been kicked out of every other school in New York at one point, and Glendale needs his father’s largesse. Elliot, bored evil genius that he is, spies Seymour sitting all alone and quickly singles him out as his chief puppet in a Machiavellian scheme, one that soon pays off for Seymour as well. Under Elliot’s supervision (or manipulation), Seymour sheds his weight, becomes a figurative and literal baller, and soon earns (or, uh finagles) the respect of his peers and teachers. In time though, Elliot’s creation craves autonomy–and turns on him.

Although Elliot repeatedly insists that his work with Seymour is a mere experiment to occupy his interest during his tenure in the hell that is Glendale, it becomes clear that he genuinely craves Seymour’s friendship, and, at times, he even admires aspects of his puppet. “You’re lucky you can still experience pleasure,” he tells Seymour early in their relationship, “I’ve become accustomed to a level of decadence so extreme that to go without luxury for even a minute fills me with a powerful rage.” The line is a great example of Rich at his best in Elliot Allagash–cartoonish comedy that tips into pathos. The roots of Elliot’s decadence are revealed a few pages later when we meet his awful, awful father Terry, a billionaire monster of the Mongomery Burns school. In a scene both funny and painful, Terry explains to an artistic genius that, not only will no one besides Terry ever see the paintings he’s commissioned from the artist, but that those paintings, along with the rest of his “Personal Museum” will be destroyed when he dies. The artist cries and pleads to renege the Faustian bargain he’s struck with his patron; Terry counters with a chilling (and hilarious) story about making a Pulitzer Prize-winning author write a “profoundly beautiful novel . . . in longhand” in front of him. “I read his book in a single sitting and then burned it in my fireplace,” he tells the shocked artist. Talk about decadence. While the scene is both funny and dreadful, the relationship between Terry and his son is downright sad. He attaches a note to a gift that he gives to Seymour when he and Elliot visit Seymour and his parents (they all play Monopoly in a scene of awkward comedy). The note says: “Dear Seymour, Thank you for spending so much time with my strange, strange boy. What is it like? You must remind me to ask you sometime.”

Terry’s note about his son is just one of many instances in this novel that speaks to the alienation that many adolescents feel. These themes match nicely with Rich’s tight, descriptive writing, which moves quickly, propelled by snappy dialogue (and plenty of punchlines, both verbal and visual). I don’t think that Elliot Allagash is being promoted directly as a Young Adult novel, but it will have a ready audience in the same smart crowd who dig funny, bright novels like C.D. Payne’s Youth in Revolt and Sherman Alexie’s The Absolutely True Diary of a Part-Time Indian. Recommended.

Elliot Allagash is available today in hardback from Random House. 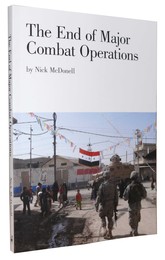 Loved loved loved Nick McDonell’s collection of reportage on the US Army in Iraq, The End of Major Combat Operations. It’s not the sort of thing that I’d normally pick up, so I’m glad that it showed up as half of McSweeney’s 34. Embedded with the 1st Cavalry, McDonell offers a series of tightly-drawn close-ups of the soldiers in Iraq, their interpreters, and ordinary folks trying to make a life in Baghdad. Great stuff. You can read an excerpt now at Salon.

Deirdre Madden’s novel Molly Fox’s Birthday takes place over the course of just one summer day in Dublin, Ireland. Perhaps that sounds a bit familiar, but Madden can’t be accused of trying to riff off Ulysses–even if her book is funny and erudite. Molly Fox, a famous stage actor, is abroad for a few months; in the interim her playwright friend, the unnamed narrator, takes residence in her home. The book opens with a strange dream sequence, full of joy and mystery, which ushers in a host of questions about the intertwined past of the narrator, Molly, and a TV art critic named Andrew. Madden’s book is a sustained investigation into how our friendships endure–and change–over the course of all the masks we wear. Molly Fox’s Birthday, a Picador trade paperback original, is new in the US this month.

Earlier this week I got a review copy of Elliot Allagash by 25-year old SNL writer Simon Rich. Now, normally I’d say all kinds of nasty things about Rich simply because he’s a debut novelist who’s younger than I am and, let’s face it, I’m a jealous hater. But Elliot Allagash‘s initial pages are charming and quite funny and seem to impel further reading, so I’ll probably just do that (i.e., you know, read it) instead of making snap judgments. Here’s one of the better book trailers in recent memory, starring SNL-er Bill Hader and Simon Rich (who apparently borrowed his father’s ill-fitting suit for the occasion):

Elliot Allagash is available May 25, 2010 from Random House.