They spent an hour at an express-train station with the stationmaster, going over the details of the rebuilding project. It was lunchtime, so they ordered in bentos and ate together in the stationmaster’s office. Afterward they chatted over tea. The stationmaster, a friendly, heavyset middle-aged man, told them some fascinating stories about things he’d experienced in his career. Tsukuru loved going to sites and hearing these kinds of stories. The topic turned to lost property, more specifically to the huge amount of lost-and-found items left behind on trains and in stations, and the unusual, strange items among them—the ashes of cremated people, wigs, prosthetic legs, the manuscript of a novel (the stationmaster read a little bit of it and found it dull), a neatly wrapped, bloodstained shirt in a box, a live pit viper, forty color photos of women’s vaginas, a large wooden gong, the kind Buddhist priests strike as they chant sutras …

“Sometimes you’re not sure what to do with them,” the stationmaster said. “A friend of mine who runs another station turned in a Boston bag once that had a dead fetus inside. Thankfully, I’ve never had that kind of experience myself. But once, when I was a stationmaster at another station, someone brought in two fingers preserved in formaldehyde.”

“Yes, it sure was. Two small fingers floating in liquid, kept in what looked like a small mayonnaise jar, all inside a pretty cloth bag. Looked like a child’s fingers severed at the base. Naturally we contacted the police, since we thought it might be connected to a crime. The police came over immediately and took the jar away.”

The stationmaster drank a sip of tea.

“A week later the same police officer who’d taken the fingers stopped by. He questioned the station employee who’d found the jar in the restroom again. I was present for the questioning. According to the officer, the fingers in the jar weren’t those of a child. The forensics lab determined that they belonged to an adult. The reason they were so small was that they were sixth, vestigial fingers. The officer said that sometimes people have extra fingers. Most of the time the parents want to get rid of the deformity, so they have the fingers amputated when the child’s still a baby, but there are some people who, as adults, still have all six fingers. The ones that were found were an example—the fingers of an adult who had had them surgically removed, then preserved in formaldehyde. The lab estimated the fingers to be those of a man, age mid-twenties to mid-thirties, though they couldn’t tell how long it had been since the fingers had been amputated. I can’t imagine how they’d come to be forgotten, or perhaps thrown away, in the station restroom. But it doesn’t seem that they were connected to any crime. In the end the police kept them, and no one ever came forward to claim them. For all I know, they may still be in a police warehouse somewhere.”

“That’s a weird story,” Tsukuru said. “Why would he keep those sixth fingers until he became an adult and then suddenly decide to amputate them?”

“It’s a mystery. It got me interested in the phenomenon, though, and I started looking into it. The technical term is hyperdactyly, and there have been lots of famous people who’ve had it. It’s unclear whether it’s true or not, but there was some evidence that Hideyoshi Toyotomi, the famous leader of the Sengoku period, had two thumbs. There are plenty of other examples. There was a famous pianist who had the condition, a novelist, an artist, a baseball player. In fiction, Hannibal Lecter of The Silence of the Lambs had six fingers. It’s not all that unusual, and genetically it’s a dominant trait. There are variations among different races, but in general, one out of every five hundred people is born with six fingers. As I said, though, the vast majority of their parents have the extra fingers amputated before their children’s first birthdays, when kids begin to develop fine-motor skills. So we hardly ever run across someone with the condition. It was the same for me. Until that jar was found in the station, I’d never even heard of such a thing.”

From Haruki Murakami’s latest novel Colorless Tsukuru Tazaki and His Years of Pilgrimage. 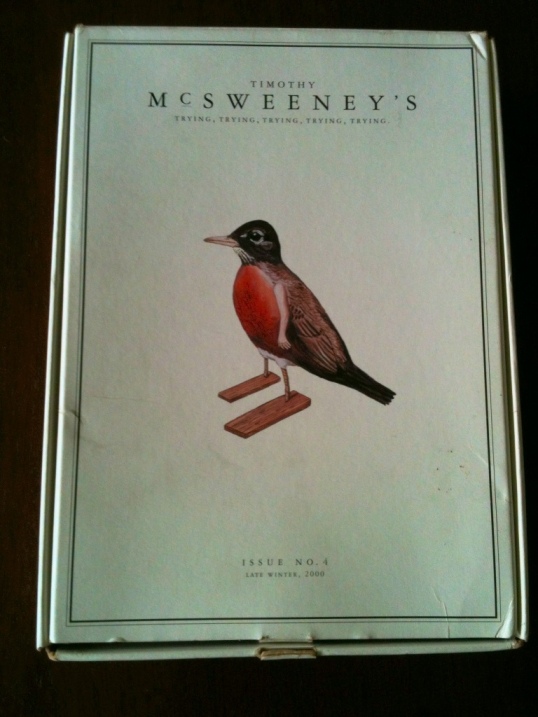 The novelist John Warner (The Funny Man), in an act of incredible kindness, sent me a copy of McSweeney’s #4, which he helped to put out years ago. In one of our emails, John offers the following:

It could be the best issue ever, a kind of platonic ideal of the McSweeney’s aesthetic before people started saying that things had a McSweeney’s aesthetic, a more innocent time if you will. My memory is that we were selling them at a live event at the Ethiopian Diamond restaurant in Chicago that we set up to help promote Neal Pollack’s book, and somehow the leftovers wound up in my trunk and I’ve been hauling them place to place ever since. . .

It’s a sort of fun artifact of the early/carefree days of McSweeney’s before Dave was DAVE, and the whole thing was still very haphazard. 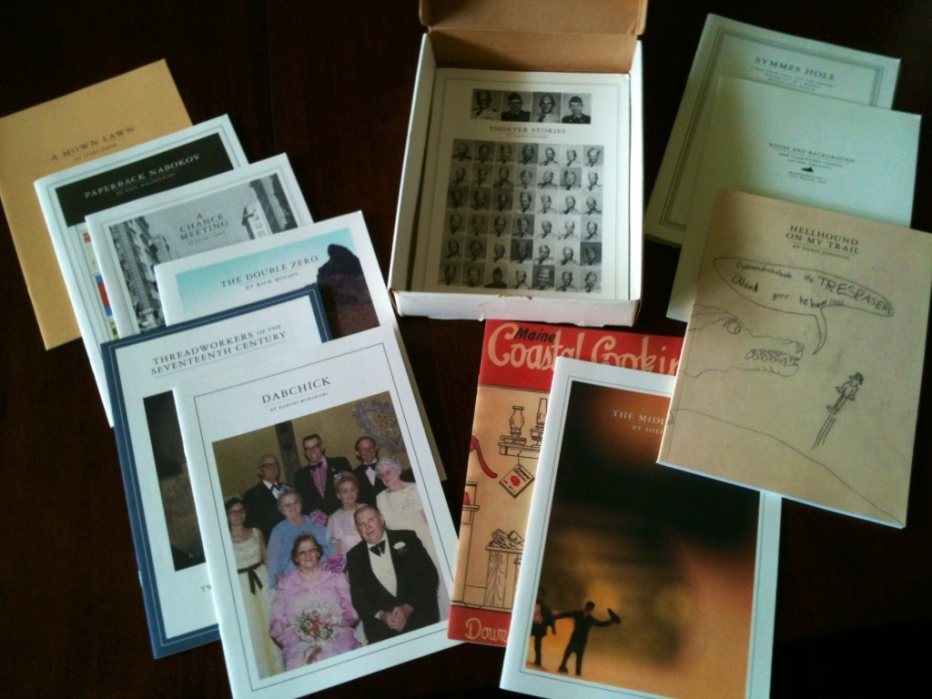 There are also many short stories, including “On the Set” by John Warner, his second published story:

To read something hilarious and absurd and ultimately kind of touching, read John’s interview with critic Kevin Morris, who hated The Funny Man.

At Koenji Station, Tengo boarded the Chuo Line inbound rapid-service train. The car was empty. He had nothing planned that day. Wherever he went and whatever he did (or didn’t do) was entirely up to him. It was ten o’clock on a windless summer morning, and the sun was beating down. The train passed Shinjuku, Yotsuya, Ochanomizu, and arrived at Tokyo Central Station, the end of the line. Everyone got off, and Tengo followed suit. Then he sat on a bench and gave some thought to where he should go. “I can go anywhere I decide to,” he told himself. “It looks as if it’s going to be a hot day. I could go to the seashore.” He raised his head and studied the platform guide.

At that point, he realized what he had been doing all along.

Fun fact: I used to live in Shin-Koenji, right near Koenji, and I took the Chuou to work every day.