Woolf, I think, became a great critic, not simply a “great reviewer.” The Collected Essays, which are still being edited, is the most substantial body of criticism in English this century. They belong in the tradition of Johnson, Coleridge, Arnold, and Henry James. This is the tradition of poet-critics, until the modern era, when novelists like Woolf and James join it. That is, her essays and reviews are a writer’s criticism, written in the language of art, which is the language of metaphor. The writer-critic, or poet-critic, has a competitive proximity to the writers she discusses. The competition is registered verbally. The writer-critic is always showing a little plumage to the writer under discussion. If the writer-critic appears to generalize, it is because literature is what she does, and one is always generalizing about oneself.

In his essay “Shakespeare in Bloom,” critic James Wood performs one of the strangest, most backhanded (and yet earnest) defenses I’ve ever read of Harold Bloom‘s aesthetic reaction to (what Bloom has called) “The School of Resentment” — deconstruction, Marxism, gender and queer theory, postcolonial theory, all that good stuff. Wood comes out strong, arguing, that in his prolific output, Bloom “has kidnapped the whole of the English literature and has been releasing his hostages, one by one, over a lifetime, on his own spirited terms.” Wood suggests that “this ceaselessness has produced some hurried, fantastical, and repetitive work,” before going on to throw around words like “garrulous” and “shallow.” Wood then takes Bloom to task over his famous (and improbable) claim that “Shakespeare invented us,” situating the claim against Bloom’s own most famous theory, the anxiety of influence. Wood says–

In truth, Bloom’s word invention is an enthusiastic Wildean necessary exaggeration. It is Bloom’s way of registering our almost religious sense that we live in Shakespeare’s shadow and that he does not simply represent human beings but brings new life, more life, into the world. . . . Bloom’s determination to honor Shakespeare’s godly primacy is a kind of secular theology.

The second section of Wood’s essay should be required reading for all English majors (or anyone serious about literary criticism). Here, Wood provides a wonderfully succinct overview of the history of literary criticism, connecting Freudian analysis and the New Critics to the various theories that Bloom would come to call the “The School of Resentment.”

As we bring up the term again, we should note that we consider it a bit pejorative and utterly reactionary, and, to borrow from (and perhaps misapply) Wood, shallow. Wood points out that “Deconstruction brings a generalized suspicion to bear on language and in particular on metaphor (or ‘rhetoric’), which it suspects of hiding something–namely, its own metaphoricity.” In short, literature always metaphorizes, and thus hides, some other impulse, one always politicized. Wood continues: “Political criticism, including cultural materialism, converts Freud’s analytical suspicions into political ones. . . . The poem is read as if it were covering something up, as if it were an alibi that is rather too fluent to be entirely trusted.” It must be interrogated to reveal its secret, the secret prejudices of its age. Wood continues, after a page or two–

This is a long way around to Bloom, but it may explain the venom and desperation of his attacks. For although deconstruction did not intend to, it has produced mutant modes of reading that, when combined with leftish political guilt or ressentiment, seem to threaten the existence of literature as a discipline.

Wood espouses some common sense here uncommon in literary criticism, taking a long view that recognizes–and attempts to step outside of–the fact that it’s not all academic when it comes to how we read our books. History and politics matter, but so does our passion, our love for our books (as silly as that may sound). He defends Bloom’s work even as he calls it an overreaction. He credits deconstruction as having “produced some brilliance and many distinguished readings (no one could deny the acuities of Derrida, of Paul de Man, of Barbara Johnson).” Wood’s essay “Shakespeare in Bloom” is the kind of thing that students and aspiring critics alike should read before they feel the need to draw arms. You can read it in the second printing (the first in a decade) of Wood’s essay collection The Broken Estate, which debuts in June, 2010 from Picador.

I’m coming to the end of Hilary Mantel’s brilliant treatment of the Tudor saga, Wolf Hall. Sign of a great book: when it’s finished, I will miss her characters, particularly her hero Thomas Cromwell, presented here as a self-made harbinger of the Renaissance, a complicated protagonist who was loyal to his benefactor Cardinal Wolsey even though he despised the abuses of the Church. Mantel’s Cromwell reminds us that the adjective “Machiavellian” need not be a pejorative, applied only to evil Iago or crooked Richard III. The Cromwell of Wolf Hall presages a more egalitarian–modern–extension of power. Cromwell here is not simply pragmatic (although he is pragmatic), he also has a purpose: he sees the coming changes of Europe, the rise of the mercantile class signaling economic power over monarchial authority. Yet he’s loyal to Henry VIII, and even the scheming Boleyns. “Arrange your face” is one of the book’s constant mantras; another is “Choose your prince.” Mantel’s Cromwell is intelligent and admirable; the sorrows of the loss of his wife and daughter tinge his life but do not dominate it; he can be cruel when the situation merits it but would rather not be. I doubt that many people wanted yet another telling of the Tudor drama–but aren’t we always looking for a great book? Wolf Hall demonstrates that it’s not the subject that matters but the quality of the writing. Highly recommended. 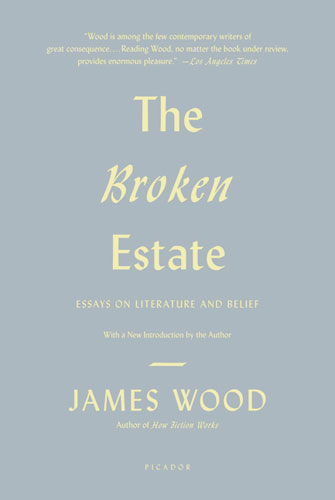 Cromwell’s greatest foil in Wolf Hall is Thomas More, who is also the subject of the first essay in James Wood’s collection The Broken Estate. I got my review copy in the mail late last week, so it was pure serendipity that I should read “Sir Thomas More: A Man for One Season” after a full day of listening to Wolf Hall (did I neglect to mention that I listened to the audio book? Sorry). Wood is harsher on More than Mantel; whereas she lets us despise him within the logic and framework of the Tudor court, Wood aims to find a contemporary secular standard from which to judge him. He finds license to do so through the work of John Stuart Mill, citing the influential essay On Liberty. Wood writes:

So it is enough for secular criticism to argue that More should have acted differently, and in asserting only this, secular criticism gives birth to itself. It is enough for the secularist to say that there are categories and modes of being which possess a transhistorical and universal status equivalent to sainthood’s, and by which it is therefore permissible to judge More’s actions.

I think in some ways Mantel’s work performs a kind of transhistorical secularist critique of More, albeit one that steps outside of historical or literary criticism or philosophy, one that remains in the logical limits of historical fiction. Mantel does not ask her Thomases to be something that we in the 21st century want them to be, but by centering on Cromwell, she engenders a sharp critique of More’s hypocrisy, a hypocrisy endemic to his time. Cromwell is a humanist (who does not know that he is a humanist, perhaps) and his complicated view of More forms the thrust of any critique we might choose to find in Wolf Hall. Cromwell admires More’s erudition but despises his arrogance; he respects More as a family man but resents his attitudes toward women. In Mantel’s London, Cromwell works to save More’s life not because he wants to avoid creating a martyr, but because he feels genuine compassion and pity for the man’s family. More’s selfishness is all the more apparent in light of this. Further reflection Wood’s book to come; this second printing (the first in a decade) of Wood’s essays debuts in June, 2010 from the good folks at Picador.