Prometheus, a big summer popcorn flick is the latest from Ridley Scott, the visionary auteur who gave us Kingdom of Heaven, Body of Lies, Robin Hood, and G.I. Jane.  Okay, forgive the sarcasm—Scott is also responsible for some fine films, including Blade Runner and Alien, which Prometheus is most decidedly a prequel to, despite the early incoherent maybe-it-is-maybe-it-isn’t buzz from the studio. I list some of Scott’s recent (and not-so-recent) films as a reminder of what many film fans might be happy to overlook: Ridley Scott may have a keen sense of style and a competent grasp on storytelling and emotion, but he’s essentially a hired gun who happens to make better-than-average genre flicks. Prometheus is another entry in his middling non-canon.

At the end of the 21st century, two archaeologists find a series of apparent star maps at ancient sites. Positing these maps as an invitation from “Engineers” — clearly, an alien species who created human life (how they make this inductive leap is never made quite clear) — the archaeologists head to the outer limits of the universe in the spaceship Prometheus. Along for the ride are a host of expendables, a skeptical Captain Janek (Idris Elba), ice-queen/corporate rep Vickers (Charlize Theron), and David (Michael Fassbender), an android who has apparently mastered Proto-Indo-European, the language these alien astronauts presumably speak (again, why this should be is never explicated). The Prometheus’s crew follow the star maps to an Earth-like moon and land near a giant temple, where they discover the remains of the Engineers, as well as some vases filled with black ooze. Being reasonable folks, they break quarantine and bring samples back on the Prometheus (recall now how Ripley tries so hard to prevent Dallas from bringing Kane back aboard the Nostromo in Alien). All proverbial hell breaks loose, and Prometheus begins to rack up a predictable body count as it slowly settles on archaeologist Shaw (played by an excellent Noomi Rapace) as its heroine.

Along the way, Prometheus gloms clumsily on to questions about creation and origin, but these questions lack real depth. The filmmakers rely heavily on clichés, hackneyed dialogue, and overdetermined images to present their creation theme, and the effect is largely divorced from the visceral spirituality we might otherwise associate with such a grand subject. Fassbender’s android is perhaps the clearest symbol of creation, a robot boy with daddy issues. (David’s creator Weyland, portrayed by Guy Pearce, foots the bill for space exploration because, of course, he’s searching for immortality. Quick aside: Why in the fuck is Pearce, a man in his forties, cast as a dying elderly man?). While Fassbender does a marvelous job as David the android, his performance retreads familiar territory (nods to Data and HAL 9000). David’s motivations are never entirely clear, and while some may argue this makes for a more interesting film, the lack of clarity is ultimately part of the film’s deflections. In Prometheus, the refusal to telegraph clear meaning isn’t subtle ambiguity, it’s the mark of empty spectacle, of filmmakers who aren’t entirely sure if they have a thesis or not. 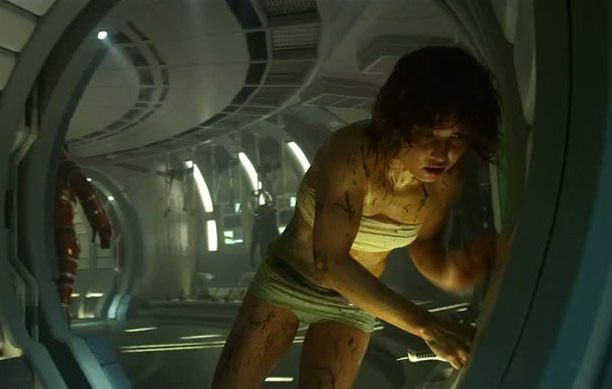 This isn’t to say that there aren’t some fantastic moments in Prometheus. The film is beautiful, the designs impeccable, and Noomi Rapace’s Shaw emerges as an enthralling heroine, a final girl to rival Ripley. The film is at its finest when it focuses its energies on Shaw, as in a bizarre alien-abortion scene, probably the most thrilling segment of Prometheus. However, most of the marginal plots fail to coalesce. Charlize Theron’s Vickers could just as easily have been written out of the film, for example. Also, we’re told at the beginning that there are 17 crew members on Prometheus, but the body count here is so nebulous that it becomes impossible to keep track of who’s dead and who’s alive, let alone care. Ultimately, it’s the mishmash of mythologies that muddies Prometheus: Is this Pandora’s Box? Pinocchio? The Fountain of Youth? Genesis? The Book of Revelation?

Prometheus is all contours and surfaces, roomy, spacious, and slick. Near the end of the film, when one character, dying, announces “There is nothing . . .” it feels like a fairly concise summary of the film’s spiritual program. I suppose I’ve devoted so many words to Prometheus simply because I fear that it’s one of those popcorn flicks like Avatar or Inception that people will try to pretend are deep or meaningful or clever. In his glowing review, Roger Ebert suggests Prometheus is “all the more intriguing because it raises questions about the origin of human life and doesn’t have the answers.” Ebert’s analysis fails to leave out that the film doesn’t even try to answer—at best, it offers a smug shrug, a winking nihilism, pure cinematic spectacle as a substitution for meaning, gussied up in the robes of inquiry.

There is a moment though when Prometheus manages to synthesize its elegant bombast with the existential questions it wishes to pose. The end of the movie—yes, there are potential spoilers ahead—follows the same curve of self-annihilation that we see in Alien, with Ripley, final girl, safe but traumatized, a survivor who may now bear witness. In what I take to be the grandest shot in the film, a terrified Shaw gazes up at the alien spacecraft as it crashes down. The spacecraft recalls an ouroboros, the snake that eats its own tail, symbol of self-reflexivity, death-in-birth: it recalls too, both thematically and physically, the shapes of the reptilian aliens that haunt the rest of the Alien franchise. Watching the wreckage of ships, I was instantly reminded of the final chapter of Moby-Dick. In the epilogue, Ishamael tells us, “The Drama’s Done. Why then here does any one step forth? – Because one did survive the wreck.” The chapter begins with a quote from Job: “And I only am escaped alone to tell thee.” Whether or not Prometheus is actively alluding to Moby-Dick is beside the point. What both narratives do well is explore the capacity for survival, illustrating what it means to witness catastrophe on a cataclysmic scale. While Prometheus hardly explores its metaphysical questions with the depth or aplomb of Melville, it does tap into the same impulse that makes Alien such a great film, illustrating the Darwinian competition that underwrites existence.

If it seems I’ve been too hard on Prometheus, it was not my intention to declare it a bad or stupid or graceless film—again, it’s a good summer popcorn flick, filled with spectacle and thrills. I should point out that my wife and I caught the matinée, had a nice dinner, and then came home and watched Alien. Prometheus actually does a remarkable job of answering to some of the mysterious imagery that dominates the planetoid scenes in that film, but it ultimately suffers by comparison with Alien. Prometheus is too antiseptic and spacious, with none of the gritty, grimy, cramped corners that makes Scott’s earlier film so scary and paranoia-inducing. Prometheus also lacks the naturalistic performances and dialogue of Alien, which I suppose is more an issue of how much film has changed since the 1970s than anything else. On the whole though, Prometheus isn’t a bad summer flick—it just can’t live up to its marketing buzz, let alone its own metaphysical posturing.