1. Biblioklept has already published a review of Álvaro Mutis’s collection of novellas, The Adventures and Misadventures of Maqroll. I didn’t write that review—my friend Dave Cianci did—but the review prompted me to read the book—or rather, to read Maqroll: Three Novellas, which I found used, wrote about here, and passed on to a friend before getting the NYRB edition with all seven novellas.

2. So I read The Tramp Steamer’s Last Port of Call last week. At 66 pages (in a tiny font), it’s the shortest novella in the book. It’s also the first story where we don’t really get an adventure or misadventure of Maqroll, who more or less sits this one out. Instead, an unnamed narrator—a writer of mundane tracts but also poems—tells the story. And of course, because this is Mutis, there is a second storyteller embedded in this tale, a Basque sailor, captain of the titular steamer. The shifting, labyrinthine connections between the steamer, the narrator, the Basque sailor, and a Lebanese woman named Warda frame the plot of The Tramp Steamer’s Last Port of Call.

3. Even though Maqroll the Gaviero is on the margins of this tale, the text resonates with his weary, picaresque spirit. And even though his name doesn’t even appear until the novella’s second half, we nevertheless get one of the more lucid descriptions of our anti-hero thus far in the collection:

The other man, whose name he never understood clearly but who was also called Gaviero, was treated by Bashur with unreserved familiarity and listened to with the greatest attention in matters relating to commercial shipping and the operation of freighters in the most remote corners of the world. The Basque could not determine if Gaviero was a nickname, a surname, or simply a designation left over from the time he was a lookout in his youth. A man of few words, with a rather odd, corrosive sense of humor, he was extremely attentive and sensitive in his friendships, knowledgeable about the most unexpected professions, and, while not a womanize, very conscious of, one might say dependent on, a feminine presence.

an old friend whose confidences and tales I have been collecting for many years, considering them of some interest to those who enjoy hearing about the unusual, contrary lives of people who do not follow the common path of gray routine in an age of mindless conformity.

(The above citation is, of course, a wonderful metatextual review of Mutis’s big book).

The narrator doesn’t reveal that he knows the Gaviero though; he doesn’t wish to pollute the Basque captain’s story.

5. Back to fate and chance for a moment: “Chance is always suspect, and much that is fraudulent imitates it.” This might be the thesis statement of The Tramp Steamer’s Last Port of Call. Maybe.

6. The Tramp Steamer’s Last Port of Call, much like the novellas that precede it, is very much a study of heterogeneity, depicting of a world of shifting identities and ever-changing motivations and outcomes. Words like labyrinth, maze, and intertwine repeat in the text, whether Mutis is describing rivers or cultures or individuals. The text is larded with blends and syntheses, but I’ll grab one simple example, one of the rare times this particular novella returns to the Gaviero. Talking to the narrator, the Basque captain says:

I realized that my own provincial and national prejudices had kept me from seeing the enormous wealth of experience and the solid, warm humanity of this man, whose nationality I never learned, as I never learned the correct pronunciation of his name, which sounded vaguely Scottish but could also have been Turkish or Iranian. I found out later that he carried a Cypriot passport. But that doesn’t mean anything, because he himself hinted I should not put too much faith in its authenticity.

7. What is most authentic in the ever-shifting world Mutis depicts? I think it’s food. I can’t think of another writer who depicts scenes of gustation with such sybaritic pleasure. Mutis never neglects to describe a meal, even on a humble tugboat:

Each tug had two cabins for passengers, who shared with the captain the food prepared by two Jamaican women whose culinary talents we never tired of celebrating. The pork in plum sauce, the rice with coconut and fried plantains, the succulent stews made of river fish, and, and indispensable and always welcome complement to the meals, the miraculously refreshing pear juice with vodka that left us splendidly disposed to enjoy the constantly changing panorama of the river and its banks; thanks to the magic of that imponderable drink, everything took place in a velvety, contented distance that we never attempted to decipher.

8. Okay, authentic might not be right word. Everything in Mutis’s novella is authentic, true even when it’s not true. I suppose I mean stable. But: Our narrator warns us that if we try to replicate the pear and vodka drink we’ll fail, like all the others who try.

9. Let me try again: What is most authentic—I realize I’ve already employed the superlative; mea culpa—what is most authentic in the world that Mutis depicts is the strange intersections of pleasure and sorrow, the way these modes intertwine the labyrinths of our lives.

10. I realize that I’ve failed to summarize the plot. Do you want that—a plot summary? I don’t have it in me, and someone did it way better. I’ll close with a long excerpt from John Updike’s thorough, excellent review of The Adventures and Misadventures of Maqroll (in a 2003 issue of The New Yorker):

Possibly alert to the dangers of doting on his hero, Mutis next provides a tale in which Maqroll hardly appears, except as a cherished acquaintance of the principals. In “The Tramp Steamer’s Last Port of Call,” the shortest of the lot and one of the best, the narrator relates an experience he himself has had, in a voice close to what we know of Mutis’s own life: “I had to go to Helsinki to attend a meeting of directors of internal publications for various oil companies.” In Helsinki, he asks to be driven to the point from which he can see across the Gulf of Finland to St. Petersburg, a shimmering sight passingly eclipsed by the transit of a decrepit tramp steamer:

The captain’s bridge, and the row of cabins on the deck for crew members and occasional passengers, had been painted white a long time before. Now a coat of grime, oil, and urine gave them an indefinite color, the color of misery, of irreparable decadence, of desperate, incessant use. The chimerical freighter slipped through the water to the agonized gasp of its machinery and the irregular rhythm of driving rods that threatened at any moment to fall silent forever.

He sees the wretched, plucky ship, which fragmentary letters on its bow identify as the Halcyon, three more times—in Costa Rica, in Jamaica, and in the delta of the Orinoco River. Its apparition invades his dreams. While on another errand for the oil company, travelling downriver to a strike-threatened seaport refinery, he occupies one of the two cabins in a small tugboat; the other is occupied by a Basque sea captain called Jon Iturri, who, it turns out, was the captain of the ghostly tramp steamer, which broke up and sank in the Orinoco. Its owner, Iturri relates, was a Lebanese woman, a younger sister of Abdul Bashur, named Warda. At their first meeting, he says, he was stunned by her “almost Hellenic” beauty:

“Her blue-black hair was as dense as honey and fell to shoulders as straight as those of the kouros in the Athens Museum. Her narrow hips, curving gently into long, somewhat full legs, recalled statues of Venus in the Vatican Museum and gave her erect body a definitive femininity that immediately dispelled a certain boyish air. Large, firm breasts completed the effect of her hips.”

As he got to know her better, his admiration intensified: “Warda, when she was naked, acquired a kind of aura that emanated from the perfection of her body, the texture of her moist, elastic skin, and that face: seen from above, when we were in bed, it took on even more of the qualities of a Delphic vision.” But the lovestruck captain was fifty, and a non-Muslim, and Warda was twenty-four and, the longer she lived in Europe, ever more approving of the conservative ways of her native Lebanon. The tramp steamer, which she inherited from an uncle, was financing her European sojourn with its hard-won profits; she flew to Iturri’s ports of call and spent rapturous days in hotels with him, but their romance could last only as long as the fragile tramp steamer did. Warda’s perfect, elastic, symmetrical beauty was one with the listing, disintegrating body of the ship as it conveyed her aging lover from port to port. The story, Mutis tells us at the outset, “has something of the eternal legends that have bewitched us over the centuries”; he ends by assuring us that “there has been only one love story since the beginning of time.” Not a happy one.

From Alvaro Mutis’s novella The Snows of the Admiral, collected in The Adventures and Misadventures of Maqroll. 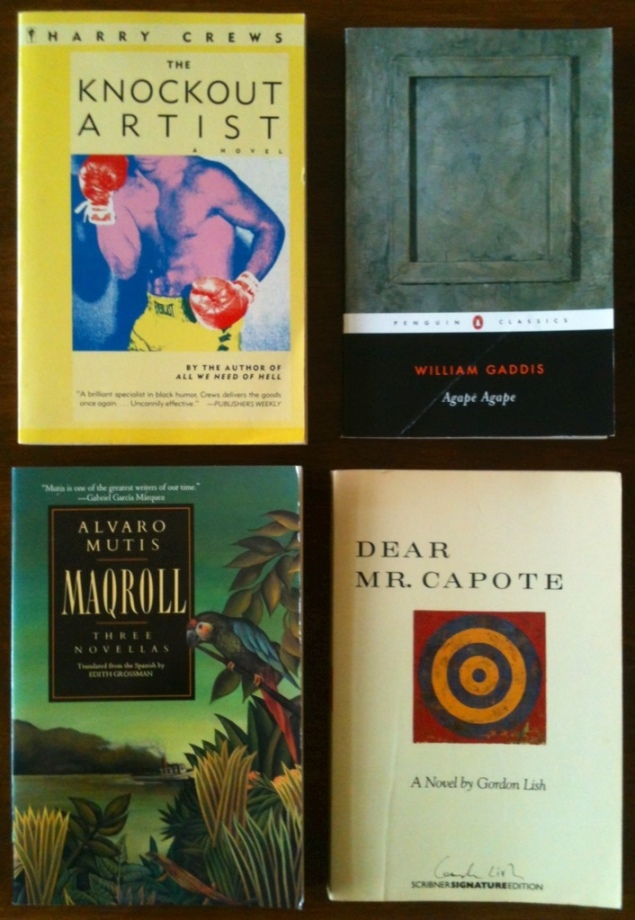 I picked up Harry Crews’s novel The Knockout Artist, which I hadn’t read, after his recent death. I was not the only person to pick up Crews books: the Crews section of my favorite used bookstore, once swollen is now depleted (the omnibus and collections all snapped up).

William Gaddis’s last novel Agapē Agape was my occasion (as if I needed one) for visiting said store; I ordered it after finishing The Recognitions. I managed to bend the cover badly in the first five minutes of ownership. I started it over the weekend and then got distracted by a friend calling me to meet at a bar. I started it again last night and got about a third of the way in. Full review on the horizon.

I have no idea why I picked up Lish’s novel other than the fact that Lish is awesome; it’s a first edition paperback and the cover is awesome. Maybe that’s why. I have no idea when I’ll get around to reading it. Compulsive behaviors.

The Mutis novel, or collection of novellas, is half of the book that Dave Cianci aka Noquar reviewed on this blog  a few months ago. I wanted the full version, which collects six novellas, but I’ll settle for this (it’s used; I have store credit, etc.). Anyway, Noquar’s review made me want to read it, so I’ve slated it for summer reading (May?).