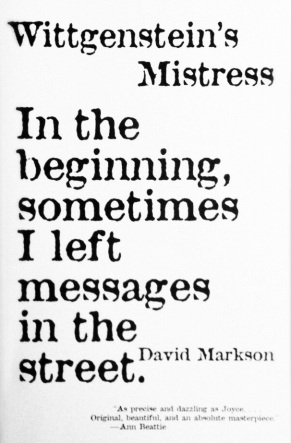 This is not a review.

This book was recommended to me.

I had read the reviews & after being unable for a few years to buy it secondhand, I bit the bullet & bought it new.

The beginning is intriguing.

The concept of the book is dead simple.

The idea is this: Kate is a painter; she is the last person on earth, maybe; she is alone in a house on the Long Island beach

Markson picks up Kate’s dialogue in media res and trusts the reader enough to piece together what the heck is going on: she is the last person left on earth and is making her way through it as best she can, telling us her story as she goes.

It is frustrating, repetitive, and does not offer much in the way of style and language.

No chapter breaks, no real paragraphs even.

This book received 54 rejections before finding a publisher. This I can believe.

Her little apercus are all about observation and remembrance, the real and the false, blah, blah.

The book was meandering, rambling & jumped all over the place.

Not that oddness is bad.

It never centers on anything.

It’s the type of book best discussed in groups, since it does bring up some interesting themes—the fragility of memory and sanity, the ineffectiveness of language, the impact of philosophy and literature.

There’s nothing for the reader to latch onto and follow, other than the voice.

What about the subtext?

Like Wittgenstein said, “Whereof we cannot speak, thereof we must be silent.”

I am mad. I am crazy. Yesterday I died but returned in time to write this.

A passage from Tom McCarthy’s essay “Transmission and the Individual Remix:”

It might be inferred, from what I’ve said, that any old remix will do. Not so: there are good and bad ones. Tristan Tzara cutting Shakespeare sonnets up and pulling their words from hats is an exercise in randomizing. William Burroughs and Brion Gysin mixing poems in with sliced-up pages of The New York Times is quite another matter: it is assiduous composition—composition understood in all its secondary nature: as reading, tracing, reconfiguring. Using the same technique, Gysin comes up with a few clumsy permutations along the lines of “Rub the Word Right Out . . . Word Right Rub the Out” and so on—whereas Burroughs generates such gorgeous sequences as:

Visit of memories. Only your dance and your voice house. On the suburban air improbable desertions . . . all harmonic pine for strife.

Why does Burroughs conjure so much more richness from the same source material? Because (unlike the painter Gysin, whose skill lies primarily in the domain of images), he has uploaded the right verbal remix software. He has read and memorized his Dante, his Shakespeare, his Eliot—to such an extent that his activity as a composer consists of giving himself over to their cadences and echoes, their pulses, codas, loops, the better that these may work their way, through him, The New York Times and any other body thrown into the mix, into an audibility that, booming and echoing in the here-and-now, transforms all the mix’s elements, and time itself.

This is what all good writers are doing, and always have been.