With the new Stephen Malkmus & Jicks album set to drop any day now, we thought we’d take a look at the history of SM’s ouvre via his past album covers. 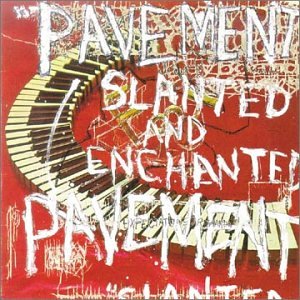 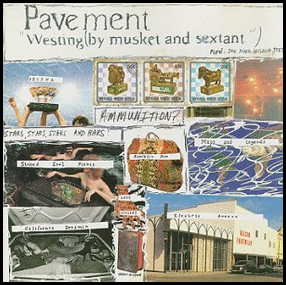 Westing by Musket and Sextant (1993): The first Pavement record I bought. On tape! From Camelot Music. Because they didn’t have Slanted and Enchanted. The DIY cover is riddled with seemingly cryptic messages that are actually references to songs and albums that Pavement liked (e.g. “Maps and Legends” by REM). Westing takes the DIY look of Slanted to the next level, and helps to inform not just the way Pavement albums and singles will look for the next few years, but also seems to codify the indie rock look in general (see also: Sebadoh). Key tracks: “Box Elder,” “Forklift,” “Debris Slide.” 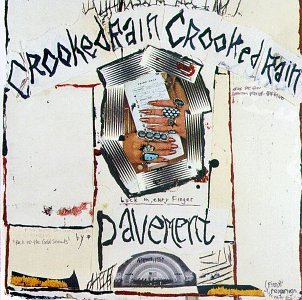 Crooked Rain, Crooked Rain (1994): This is the first album I remember anticipating coming out. “Luck on every finger”–more cryptology. Was the second song called “Ell Ess Two” or “Elevate Me Later,” or maybe it was “LS2”? Is that SM’s handwriting? An album about rock music. It didn’t leave my CD player for the next three years, and that is no exaggeration. Key tracks: The whole album is perfect. “Gold Soundz” works on any mixtape if you’re in a pinch though. My favorite track might be “Stop Breathin’,” which I think is about the Civil War. For years I thought that Pavement included the only bad track on Crooked Rain, “Hit the Plane Down,” as a kind of purposeful marring, like ancient artisans who included a flaw in their art so as not to displease the gods. Later I just realized that that was the Spiral Staircase track.
END_OF_DOCUMENT_TOKEN_TO_BE_REPLACED

So today Biblioklept turns a healthy one year old. When I wrote that very first post about A Raisin in the Sun, I had no inkling of the vast riches on my horizon. Ahhh…simple youth. Them were the days, etc. etc. etc.

I’ll celebrate this momentous occasion by recounting my recent trip to my favorite used book sellers, where I loaded up on more than I can possibly read in 2007. Eidetic readers may recall my last book buying spree: I’m happy to report I read 5.5 out of 7 of the books bought on that trip (I’m only counting half of The Portable Faulkner): that’s almost 79%! Not bad. Because that’s what reading’s all about: percentages and stats. Like baseball.

I’ve been dipping into the select chapters of FW included in The Portable Joyce for a few years now. I’m currently enrolled in a Joyce seminar but we won’t be reading more than a sentence or two of the book. My professor described it as a “vortex, a black hole from which no one returns.” He said this with a smile and meant it in good humor but maybe he has a point. The book is possibly probably incomprehensible unless you’re someone like, say, Terrence McKenna or L. Moholy-Nagy (whose graphic organizer for FW appears below) or Joseph Campbell. 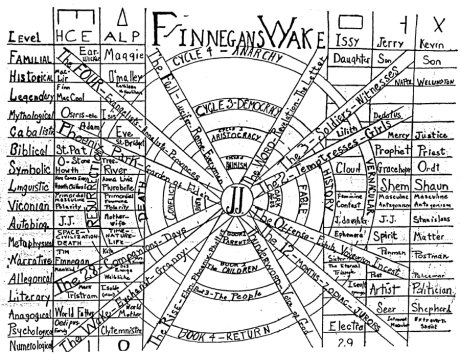 I recently listened to a series of lectures given by Joseph Campbell on Joyce; Campbell suggests that FW is the dream that happens after Molly and Leopold Bloom fall asleep at the end of Ulysses. Campbell also posits that Joyce has a final book planned that would finish the four book cycle that began with Portrait; he thinks that the book would be very simple and clear and probably short, and would be thematically based on the mother-as-ocean. Campbell’s lectures are brilliant, beautiful, human, and humorous, and best of all, they are enlightening. Besides explicating the book as a whole, he also guides his audience through select sentences of FW in ways that make you go “!!!” Brilliant stuff.

You and I both know that I will probably never read this book in its entirety. That’s okay. It’s a vortex of fun.

The Amazing Adventures of Kavalier and Clay, Michael Chabon 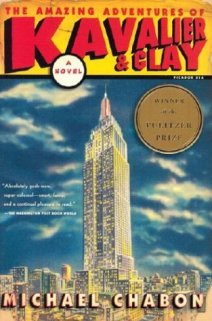 I almost bought this book in the central train station in Rome two summers ago; I bought Eugenides’s somewhat disappointing novel Middlesex instead, because my wife had more interest in it. I’ve actually started the book already (despite having a ton of Joyce and Joyce-related academic crap to read); it’s pretty good. I’ll probably finish it if I can keep up this pace. 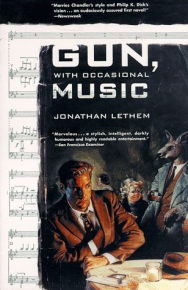 It’s no secret that we’re big fans of Mr. Lethem around the ‘klept. This is supposed to be a mystery novel involving memory-annihilating drugs and thug kangaroos. My plan is to read this over the Thanksgiving break. 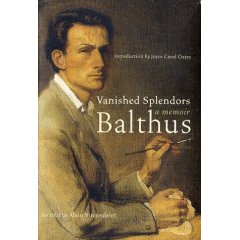 As with most of the books that I end up buying in labyrinthine used books stores, I found this by mistake. For some reason it was mixed in with children’s hardback picture books. Balthus is one of my favorite painters of all time, so of course I had to buy his memoir. The chapters are short, vague, and achronological, making this a book that you can just pick up and read at random (kinda like Finnegan’s Wake).

If I wasn’t so lazy I’d go heat up the ole scanner and show you some of the beautiful images in these “children’s books.” I find that lots of children’s “picture” books tend to be condescending or just plain stupid, and finding good ones is not easy. I spent over 40 minutes plumbing through dusty boxes before coming across these two. David Cunningham’s gentle and dark-hued watercolor depictions of a lake at night are deep and soothing, as is the simple text that accompanies the illustrations. Cowcher’s Whistling Thorn details the evolution of acacia, giraffes, and rhinos. Lovely stuff.

I never look at the used DVDs; I have a Netflix account, library card, and a program called DVDShrink, so if I want to own a DVD it’s a pretty simple operation. Still, there are rare cases where I want the packaging, usually music films like Sonic Youth’s Corporate Ghost DVD. Like the Balthus book, I happened across this two-disc Pavement film among the children’s books. I’d seen it before: the hour long documentary is really good, and the videos are excellent. The concerts…well, I dunno. I’m not really into that kind of thing, unless Martin Scorsese and The Band are involved.

I think that’s it for this recent trip.

Now, I would be remiss if I didn’t include a book theft in our birthday edition, so here goes.

There really isn’t much to this story, and I’m actually deeply ashamed of this one. No irony, no joke. Most of the book thefts I discuss on this site are books that I’ve borrowed and never returned or books that I’ve purloined that no one was going to read anyway. This one is a straight-up theft from an indie book store. Ouch.

When I was a young stupid college freshman (note the defensive tone)–it was my first semester in fact–I had to go to a certain Gainesville book store to buy my course texts. They seemed outrageously overpriced and I was outraged, despite the stipend the state of Florida was giving me as part of my scholarship to buy books (I thought of this as beer money). In order to “get even” with these high prices, I not-so-subtly swiped a copy of Nabokov’s Laughter in the Dark: I simply picked it up after I’d paid for my course texts, walked out of the store with it, got on my bicycle, road home, and never read it. That was about ten years ago. Mea culpa. I’ve never done anything like that since, and, like I said, I feel bad about it now, so bad that every time I pick up the book to give it a shot, a small shudder of shame creeps through me and I put it down.

So there you go: new books and a book theft. Here’s to another year of cranky commentary with elitist overtones.