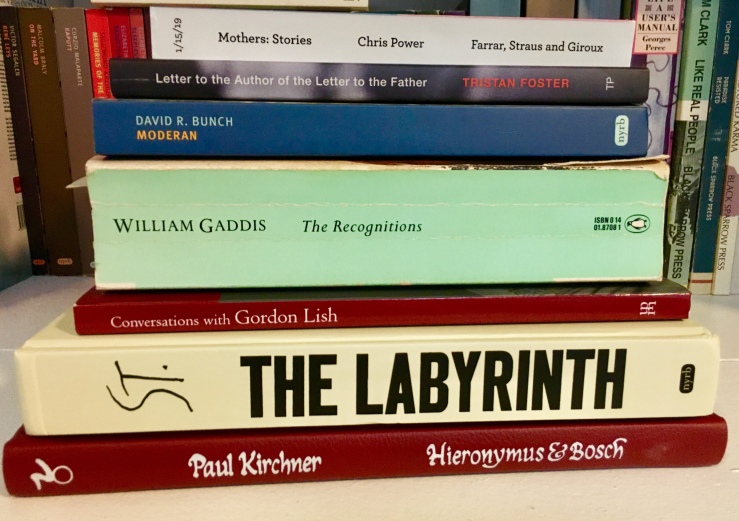 For the past few days I’ve felt as if I would never put one word after another again, that I would never put together a sentence, string together clauses and sling them out into the world. This previous statement is hyperbole and I am silly—but even simple emails have seemed the acme of wretched futility to compose. Chalk it up to a mild head cold; chalk it up to too many essays to grade; chalk it up to anxiety of (fear of) writing. But I feel like I used to want to feel like I needed to write, right? On 1 Oct. 2018 I wrote a silly post on this weblog called “Blog about October reading (and blogging) goals,” in which I set a goal to blog “every day, even about nothing,” which I failed to achieve.

I did actually achieve some of the reading goals expressed in that October goals blog though: I finished George Eliot’s Silas Marner; I made a bigger dent in Moderan, David R. Bunch’s cult dystopian novel; I finally read William Gaddis’s novel Carpenter’s Gothic; I actually returned and did not keep forever a book I borrowed from a friend; I did not gobble up Paul Kirchner’s Hieronymus & Bosch but rather limited myself to one or two cartoon strips a day (or sometimes, like, five).

I’ve read the first two stories in Chris Power’s debut collection Mothers and they are good (the collection is available in the US in January 2019; I should have a full review then).

David Bunch’s Moderan deserves a big proper essay. I’ve suggested that our zeitgeist surpasses the parodic powers of postmodernism’s toolkit, but Moderan anticipates and slices up Our Bad Times.

Part of my anxiety about writing comes from having failed three times now to write a proper review of Conversations with Gordon Lish, which is the kind of self-deconstructing performance of writing about writing that is difficult to describe or analyze; it’s the sort of thing you simply want the reader to read.

I started the audiobook of William Gaddis’s novel The Recognitions, and have ended up not only reading my Penguin edition in tandem—a sort of re-rereading—but have also been flirting with The Gaddis Tapes1 and Letters of William Gaddis.  (This summer I said I’d reread The Recognitions: is this that?). I don’t really know what I want from this material, and I certainly don’t suggest it as anything approaching ancillary or auxiliary “help” with Gaddis’s project—I mean, in his Paris Review interview Gaddis paraphrases his hero and explains why we shouldn’t look for keys to art in the artist:

I’d go back to The Recognitions where Wyatt asks what people want from the man they didn’t get from his work, because presumably that’s where he’s tried to distill this “life and personality and views” you speak of. What’s any artist but the dregs of his work: I gave that line to Wyatt thirty-odd years ago and as far as I’m concerned it’s still valid.

—but hey look I know what I just did—took my cue from the artist in explaining the artist’s art. So. Oh, hey, here’s a great little segment from a letter Gaddis to his mama (from Mexico City) in April, 1947:

Could you then do this?: Send, as soon as it is conveniently possible, to me at Wells-Fargo:

a pair of “levis”—those blue denim pants, if you can find a whole pair

the good machete, with bone handle and wide blade—and scabbard—if

this doesn’t distend package too much.

those two rather worn gabardine shirts, maroon and green.

Incidentally I hope you got my watch pawn ticket, so that won’t be lost.

PS My mustache is so white and successful I am starting a beard.

The same day I got The Labyrinth, a collection of mid-century cartooning by Saul Steinberg (new from NYRB, I read a passage in The Gaddis Tapes where Gaddis quotes his friend, Saul Steinberg. That same day my son, eight, went through the whole volume, and asked me what it was, how I was supposed to write about it, etc. Still not sure, but it’s great, heroic, etc. and I hope to post a review at The Comics Journal later this month. Here is Steinberg’s Quixote:

And I like to pretend this is his illustration of some Gaddis character at a party in The Recognitions (even if I recognize it is not):

Bottom of the stack is Paul Kirchner’s latest Hieronymus & Bosch, a sort of MAD Magazine take on eternal damnation that puts the scatology in eschatology. Great stuff.

Hope to do better than this in the next 29 days.

Adapt by Tim Harford. New from Picador. Their description:

In this groundbreaking book, Tim Harford, the Undercover Economist, shows us a new and inspiring approach to solving the most pressing problems in our lives. When faced with complex situations, we have all become accustomed to looking to our leaders to set out a plan of action and blaze a path to success. Harford argues that today’s challenges simply cannot be tackled with ready-made solutions and expert opinion; the world has become far too unpredictable and profoundly complex. Instead, we must adapt.

Deftly weaving together psychology, evolutionary biology, anthropology, physics, and economics, along with the compelling story of hard-won lessons learned in the field, Harford makes a passionate case for the importance of adaptive trial and error in tackling issues such as climate change, poverty, and financial crises—as well as in fostering innovation and creativity in our business and personal lives.

Taking us from corporate boardrooms to the deserts of Iraq, Adapt clearly explains the necessary ingredients for turning failure into success. It is a breakthrough handbook for surviving—and prospering— in our complex and ever-shifting world.

Let me admit biases up front: for the past few years, I’ve looked forward every Wednesday to Nathan Rabin’s regular column at the AV Club,“My Year of Flops,” where he reviews–and reappraises–some of the worst-received films of all time. I’m also a fan of Rabin’s other columns, “THEN! That’s What They Called Music!” and “Nashville or Bust,” as well as the general tone of the AV Club, which he no doubt helps set as its head writer. I also thought Rabin’s memoir The Big Rewind was pretty good. So, I’m probably not the most objective person to review Rabin’s new book My Year of Flops, which comprises 35 of Rabin’s past columns, 15 new entries, and interview snippets with some of the actors who had the (mis)fortune to turn up in these flops. I’ll do my best to assess how well these columns–most of which were written for the internet–hold up as a book.

So, what, exactly, constitutes a flop?  There are the biggies here, of course, infamous studio-busting career-killers like Heaven’s Gate, Battlefield Earth, and Ishtar;  the batshit crazy weirdfests that were destined to become cult classics, like Southland Tales, Howard the Duck, and The Apple; the disposable movies made to be forgotten, like Bratz: The Movie; there are forgotten and overlooked oddballs, like Robert Altman’s teen sex comedy, O.C. and Stiggs, and Gospel Road, where Johnny Cash tells the life story of Jesus. All of these films share disappointing (or non-existent) box office results as well as general critical disapproval (or at least bewilderment). As part of his revisionist project, Rabin ends each entry by declaring the re-appraised film a “Secret Success,” a “Fiasco,” or a “Failure.” Tellingly, most of the time Rabin finds his subject to be a “Fiasco.” He’s willing to take each film on its own terms; he’s also incredibly open to viewing each film in a way that transcends the trappings of its marketing to an intended audience.

Take, for example Tough Guys Don’t Dance, a film macho novelist Norman Mailer thought it would be a totally sound idea to not only write but direct. Rabin’s initial analysis derides the film for its cardboard characters, debased gimmickry, and embarrassing dialog. By the end of his reassessment, however, Rabin has given the would-be thriller a new life as “a darkly comic, horror-tinged melodrama about the emptiness of excess and the soul-crushing costs of pursuing endless pleasure.” His review rests not on a personal ironic vision, but rather on a willingness to see Mailer’s own ironic vision at work behind (and in front of) the camera.

In the same way, Rabin is able to put aside–even while acknowledging–the dreadful reputations surrounding films like Ishtar and Heaven’s Gate. Even though the latter film essentially destroyed both its studio and the maverick filmmaking style of the 1970s, Rabin finds in it more than a slight redemption–he finds a flawed masterpiece, a gorgeous treatise on Manifest Destiny that doesn’t deserve its reputation. Similarly, Rabin would have us believe that Istar actually is funny. Both of these entries are remarkable not just in their clear revisionist goal, but also for how instructive they are. In both write-ups, Rabin reveals much of how movies are made, and how movies are made flops–the ways that infighting, firings, and studio expectations can damn a film before it even premieres.

While My Year of Flops is instructive in its criticism, it’s also very entertaining. Rabin has a keen sense of satire, and if he occasionally tips into snark, it’s always earned (and if you have a problem with a writer being snarky at the expense of Battlefield Earth, well, you’re probably a prig anyway). A great illustration of how Rabin combines his sense of humor with his instructive criticism in his coinage of the term “Manic Pixie Dream Girl”–

Cameron Crowe is particularly guilty of employing the MPDG trope, but you can find her pretty much everywhere you look–at least in the domain of rom-coms. Rabin proposes the term in his first entry in the series (also the first entry in the book) a review of Crowe’s much maligned Elizabethtown. Rabin finds it to be a Fiasco. In a move that sums up both Rabin’s program and his generous spirit, Rabin concludes My Year of Flops by re-reassessing Elizabethtown–he now dubs it a Secret Success. While I don’t subscribe to the idea that a critic should-be a starry-eyed optimist who finds the best of all possible worlds in each work, I do think that it has become far too easy to outright dismiss someone’s hard work. We live in a hyper-mediated age that moves too fast: all propositions are disposable, including the arts. Rabin, in taking each work on its own terms, does a service to both criticism and creativity.

Rabin’s own columns might, of course, fall prey to this disposable age. Today’s columns and blog posts are meant to be consumed quickly; although the best might find a life of new clicks in cyberspace, most are tomorrow’s virtual bird-cage liners. The blog-book is thus a tenuous grasp at some permeability–or at least respectability. My Year of Flops is fun, energetic, and insightful, but it does not bear sustained reading. The entries are best consumed one at time, probably between other tasks (or other books). It’s a great book for the john. Still, in an ideal library, My Year of Flops would stand squarely along side any other work of film criticism (it’s certainly sharper than anything by Leonard Maltin or Gene Shalit). Ultimately, Rabin does here what all great critics do–he makes a case for the works he’s appraising. He makes you want to see his Secret Successes and even the Fiascos (and, at times, even the Failures). I’ll even forgive him for making me watch The Apple. Recommended.