. . . it’s not too difficult, very obviously, to keep ten or twenty or let’s say even a hundred books; but once you start to have 361, or a thousand, or three thousand, and especially when the total starts to increase every day or thereabouts, the problem arises, first of all of arranging all these books somewhere and then of being able to lay your hand on them one day when, for whatever reason, you either  want or need to read them at last or even to reread them.

—Georges Perec, from “Brief Notes on the Art and Manner of Arranging One’s Books” (1978)

I didn’t take a picture of the entire bookshelf, a humble little two-tier piece that abuts the corner of any room with corners. Actually, I did take a picture—a few—but they just looked awful. Like I said in the first installment of this series, it’s not my goal to present aesthetically pleasing portraits of bookshelves.

This corner bookshelf was my grandmother’s and I’ve had it for at least 10 years. The top shelf holds five books that rest there for entirely aesthetic purposes; looking at them now I realize that, with the exception of the Audubon volume in the middle and the Lewis Carroll on the end, I’ve never even bothered to flick through them. They look strange photographed here without the framed photographs, plants, and tchotchkes that attend most shelves in the house: 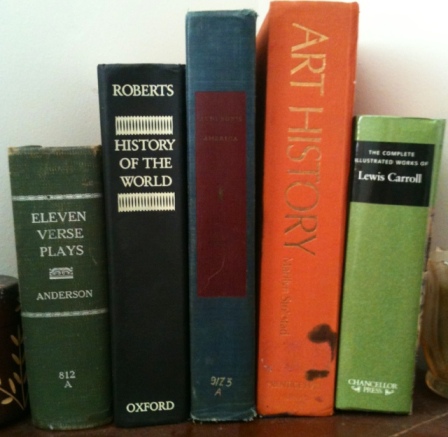 At one point, this entire piece of furniture was double shelved (is this a term? Do you know what I mean here?) with cheap mass market paperbacks, the kind of books that I bought and received for years. I rarely buy mass markets anymore; nor do I like hardbacks. I’m a trade paperback man. Still, some of the sci-fi/dystopian lit here was fundamental to my early reading habits, to the point where I even pick up newer volumes (like Philip Pullman’s books) in mass market paperback.

We also see here the first of many cameras scattered throughout the books in this house. This particular Polaroid is likely the least antiquated; I think it’s from 1999 or 2000. I took all these photos with an iPhone:

The shot is blurry, so you might not make out the cracked spines, but there are many Huxley books there (although it occurs to me now how odd it is that only one Vonnegut volume is there, when I know that I have so many more somewhere). Two noteworthy Huxleys: 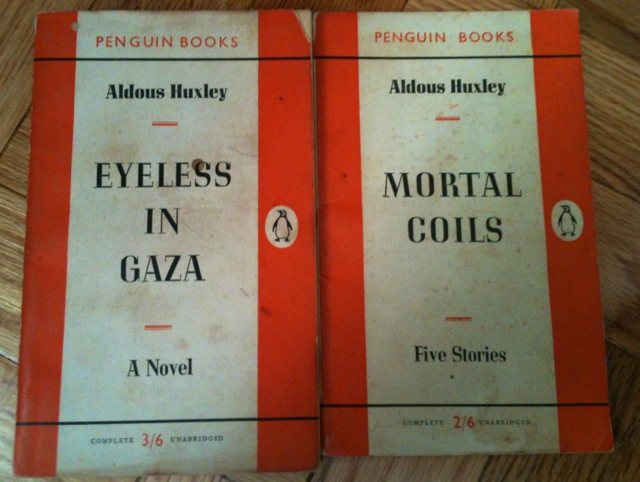 We have children. There are children’s books everywhere in the house, organized in no particular fashion. The drawing and painting books belonged to my grandmother, who was an amateur painter. I am fairly familiar with these books. 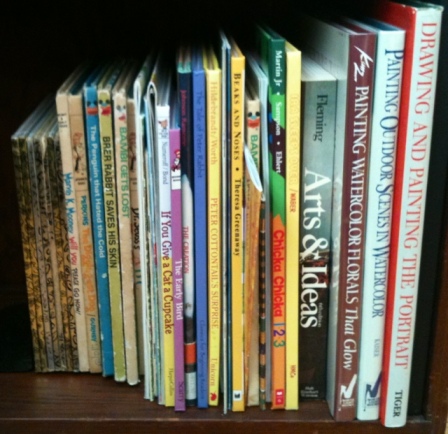 More kids books. They were probably stuffed here after piling up on the floor one night. The box is full of homemade dice and preserved insects: 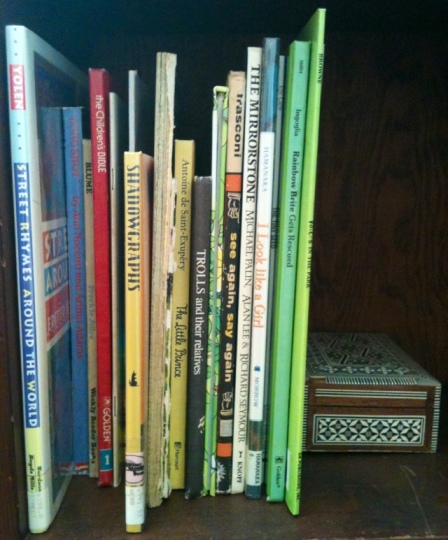 And more mass markets—sci-fi and fantasy. Many of these were, uh, “borrowed” and never returned, either from a school that I used to work for (The Left Hand of Darkness; Alas Babylon, the aforementioned Pullman volumes), or from dear friends (I’m looking at you, William Gibson books). There are probably 50 more books like this in a secret stash in the back of the house, out of sight: 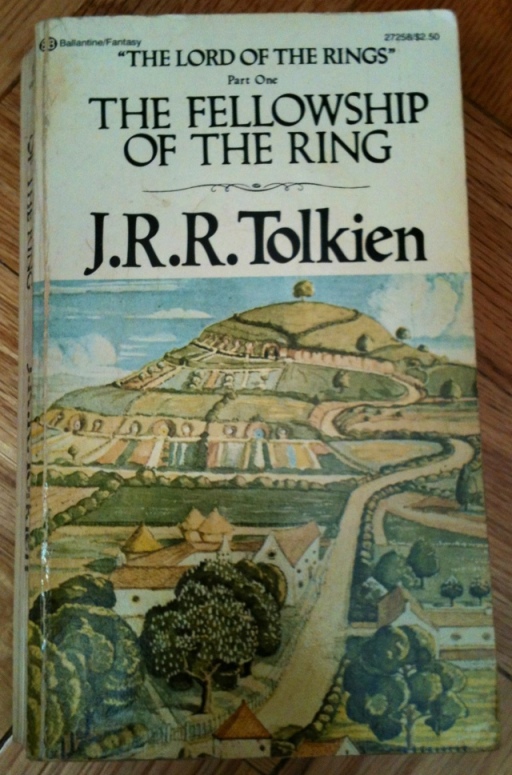 A dear friend lent me Gibson’s Neuromancer years ago; I know Gibson’s other early books (the first two trilogies) must be somewhere around the house, unless I passed them on, but I’ve always been fond of this book, which taught me how to read in some ways: 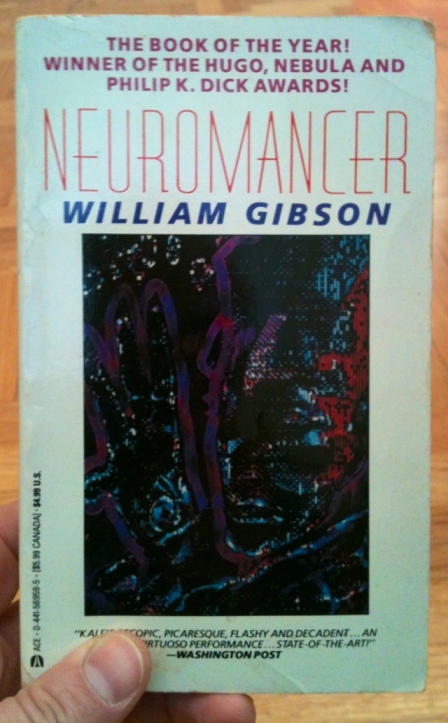 So we’ve made it out of my bedroom—I chose not to take a picture of my wife’s night stand, for her privacy, I suppose, although she might not have cared. (She doesn’t read this blog and is likely unaware of this weird project). There was a Hayao Miyazaki adaptation she was reading to our daughter there, and Hemingway’s novel The Garden of Eden, which I think she finished just the other night.

We read many, many books this year, but most of the books we read–especially the very best ones–were not published this year. And as usual, we’re always playing catch up. Case in point: we finally finished Roberto Bolaño’s much-lauded-in-2007 hit The Savage Detectives just last month, and despite feeling that it was kinda overrated we couldn’t help picking up his much-lauded-in-2008 hit 2666 at Green Apple Books in San Francisco this weekend (sidebar that will not surprise any San Francisco reader: San Francisco has the best book shops. Sick). So, we will spend at least the first part of 2009 getting through that massive tome.

Bar none, the best book we read in 2008 was Cormac McCarthy’s masterpiece Blood Meridian, published back in 1985. So good we read it twice, and so should you. We also loved loved loved Philip Pullman’s Nietzschean sci-fi trilogy His Dark Materials. Finally, we must highly recommend E.L. Doctorow’s novel Ragtime, which we finally got around to reading this year (last week, so, no review). This book is great, and you will wonder why you haven’t read it before now. A somewhat neglected classic. But. Let us move on. 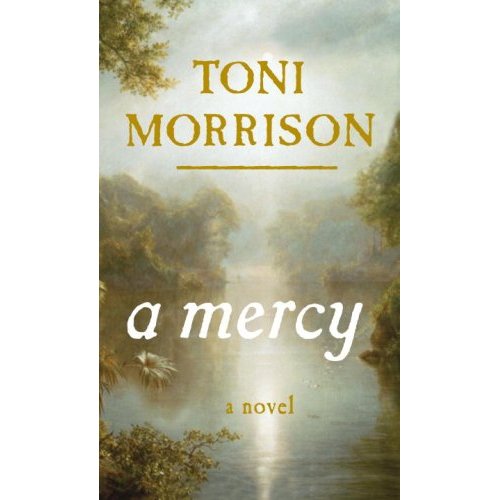 There were a couple of fantastic highlights in 2008, of course, most notably Toni Morrison’s A Mercy, a novel on which we cannot heap enough praise. In a time of overstuffed, overlong novels, A Mercy is rich and complex yet lean at just over 170 pages, and, as many critics and reviewers have pointed out, the novel serves as a touching counterpoint for her 1988 masterpiece Beloved. 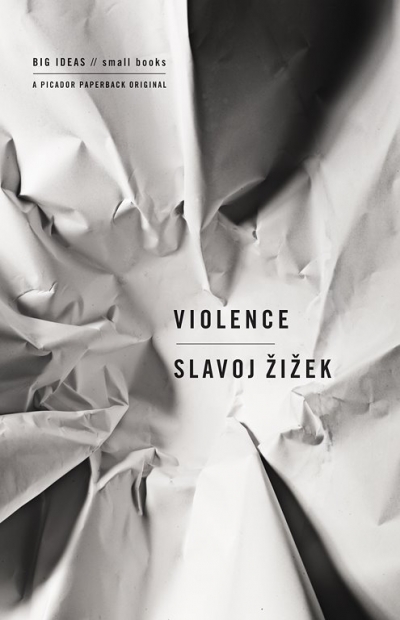 We also loved–and frequently returned to–Slavoj Žižek’s Violence, a work of cultural criticism that managed to be fun and infuriating and serious and frivolous at the same time. Too often reviewers fall back on hackneyed phrases like “thought provoking,” but Žižek’s work really is provoking, often to the point of confrontation. Like Plato, Nietzsche, and Derrida before him, Žižek is the gadfly, the upsetter, the spoiler. He has earned his haters.

The Paris Review Interviews, Volume III and The O. Henry Prize Stories collections were also sublime–great interviews, great stories, lovely tasty morsels. Ralph Ellison, William Carlos Williams, Stephen Millhauser–what’s not to love? We also really were digging Mark Reibstein and Ed Young’s sumptuous children’s book, Wabi Sabi. You’d think a book that included a haiku on each page would be cheesy or cloying or too precious, but no. Great stuff. 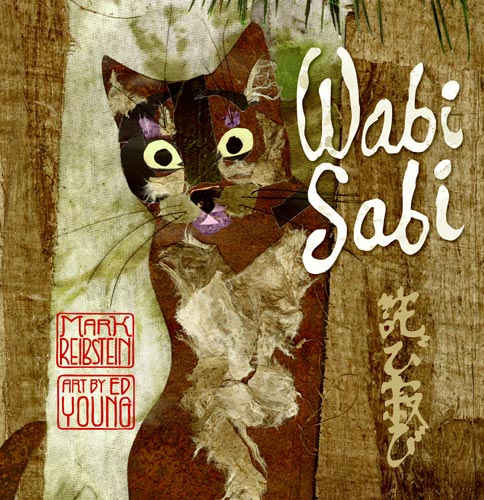 We’d also be remiss not to give props (again) to Wendell Berry’s essay “Faustian Economics,” published in the May, 2008 issue of Harper’s. Berry’s piece is beautiful and sad and timely, and everyone should read it. It was one of the best things we read all year. Speaking of Harper’s, the latest issue includes–along with a touching memorial to critic John Leonard, who died last month–the remarks of those who spoke (including Zadie Smith and Don DeLillo) at David Foster Wallace’s memorial service this October. Wallace’s suicide was and is awful, and remarking on it in a “Best of 2008” section seems tacky, but we can’t help it. We love his work and are sad that there won’t be any more, or at least much more, or at least any “finished” work from the man, but, as George Saunders puts it in his portion of the memorial: “In time–but not yet–the sadness that there will be no new stories from him will be replaced by a deepening awareness of what a treasure we have in the existing work.” So, if we remark on DFW here, it is only because he was one of the best, and he died this year, and in some sense, we need to remark on it yet again, despite having written too much already.

But let’s not end on a sad or sour note. Plenty of great reads in 2008, and surely we neglected a tome or three in this rehash, but hey, we’re human, we err, etc. We look forward to more reading in 2009, and perhaps, improbably (we lie to ourselves, who doesn’t though?) we may actually defeat that stack of books by the bed, on the night stand, on the coffee table. 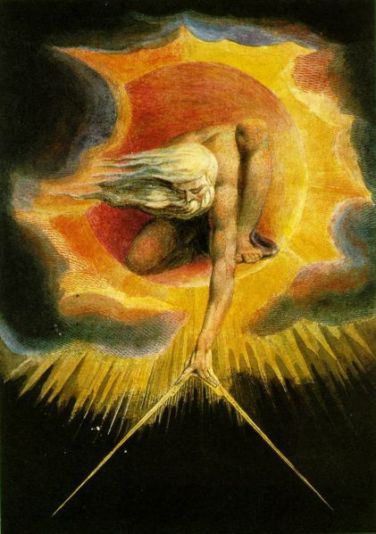 Over the past three weeks, I read, and, alternately listened to, Philip Pullman’s fantastic His Dark Materials trilogy–The Golden Compass, The Subtle Knife, and The Amber Spyglass. Here’s the short review:

His Dark Materials follows Lyra and Will, two children from different worlds (literally) who must work together to repair a damaged multiverse. Lyra comes from a world where people travel side by side with their daemons, spirit-images of their souls who take animal shapes. Will is an outsider in “our” world, a young fatherless boy who must take care of his mentally ill mother. The novels, in their simplest sense, detail the coming of age of these two as the traverse multiple parallel universes. In the backdrop there are witches and zeppelins, armored bears and dark specters, a compass that can point to the truth and a knife that can open all worlds, angels and scientists, and Lyra’s cruel and terrible parents, the cunning Mrs. Coulter, and Lord Asriel, whose will to kill God–The Authority–precipitates the action of the narrative. 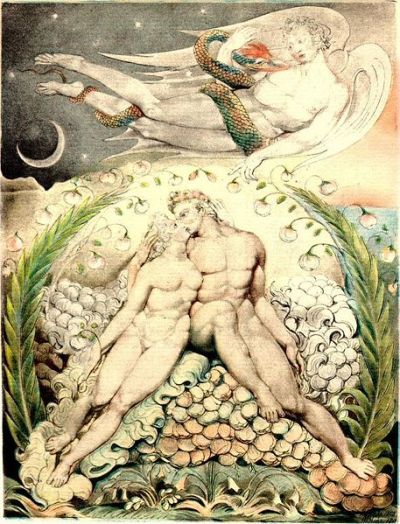 William Blake, “Satan Watching the Caress of Adam and Eve”

As many critics have pointed out, His Dark Materials recapitulates Milton’s Paradise Lost (the series takes its name from a line from that epic poem). However, the series really reinterprets the British Romantics’ assessment of Paradise Lost. Pullman engages a host of Romantic writers, foregrounding Keats’s idea of negative capability, and prefacing many of the chapters with quotes from Romantic poetry. In particular, Pullman cites William Blake. Indeed, it seems to me that His Dark Materials effectively synthesizes many of Blake’s poems and ideas, The Marriage of Heaven and Hell and Songs of Innocence and of Experience in particular. The novel also engages a number of Nietzsche’s ideas, and even, I believe, alludes to several concepts of Derrida’s (in particular, the idea of the gift of death). Additionally, Pullman weaves in the many-worlds theory, extended discussions of evolutionary anthropology, rampant infanticide, and auto-trepanation. Good stuff.

When the film of The Golden Compass (I didn’t see it) came out last year, it ignited a small controversy about the books. According to the Baptist Press, Pullman presents “a fantasy universe where witches are good, the church is bad, and at the end of it all, God dies.” This really isn’t the case, if you want to go with a precise reading of Pullman’s actual words, but, consider the source. I’m sure the controversy is healthy for Pullman’s sales; it certainly piqued my interest in the book, and I’m guessing that there are plenty of kids who, once their private Christian schools banned the books, couldn’t wait to get their hands on the verboten goods. And that’s a good thing. 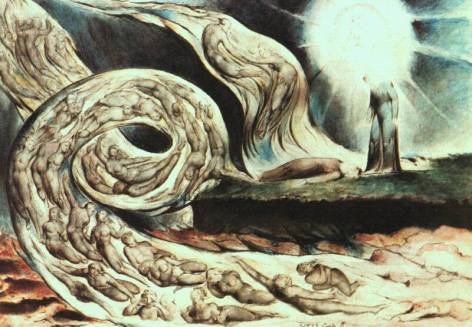 His Dark Materials meets and surpasses my notions of good fantasy/sci-fi/imaginative fiction: the books engage multiple complex ideas in a new and often unsettling way. Unlike the Harry Potter series, which simply operates within familiar, preexisting archetypes of fantasy, Pullman’s work consistently disrupts reader expectations, pushing set ideas about religion and science, art and fantasy into new and fantastic places. Ultimately, although many will seek to suppress this book as an “amoral” work, His Dark Materials proposes a very real set of ethics inscribed in a world of moral relativity. The characters grow up and make good, selfless choices, decisions they make independent of absolute moral authority.

I very highly recommend these books.